Currently, in each added database, I have positioned immediately below the inbox a separate group with smart groups. Which means any item in the inbox has to be moved/dragged into that separate group. It seems pointless to have to do that if there’s no need.

Also, whether or not ok to use the added database inbox as above, is it okay to rename its inbox?

While an inbox should be only a temporary location ideally, it’s definitely okay to keep them there as long as you want/need.

And to rename it?

Sure, otherwise it wouldn’t be possible.

I was afraid to do that! That solves a problem for me. I do just what @mog seems to do. I had other schemes but that one seems perfect for my flows. Great. By the way I have had DEVONthink for 3 years, I would say in the last month my use of it has grown expotentially. Weird it feels like a new app almost. I just got stuck in somehow to experimenting with it. I was afraid before because I have precious stuff in there. I have 5 backups of course but still…

@cgrunenberg can I ask you why that is? I appreciate the Global Inbox should not be used as permanent storgage. I kind of intuit why somehow, it has a specific function. I thought the database inboxes were similar in some way? I know that files kind of default to them if you drag and drop sometimes for example.
Why is it not ‘ideal’ though, as you put it, to use them as permanent storage? Pending your answer this is what I am doing (I know it might be eccentric ok

Inboxes can of course be used for permanent storage, there’s no real disadvantage. It’s just an unusual usuage of an inbox.

Thanks, I won’t take up your time but in case you are interested just to explain my reasoning just FYI. The reasons are probably marginal and I would not argue from my relative ignorance that other factors could well outweigh them that I don’t know about. I am a very very light user in terms of volume of data by the way and I think an outlier among your customers.

I don’t have a huge number of items to start with. I use DEVONthink for its AI; well that is what I am finding to be honest after a couple of years of use too. It has really grown on me. I don’t know how I would manage without it now.

Since one can import directly into folders and databases using sorter and in other ways too I don’t find any reason to make an extra step by using inboxes in databases?
I use the global one for a couple of reasons until I make a decision on some items. Since database inboxes ‘show’ in three panel view and I use that a lot now, it is great, it saves me an extra step. I also use smart groups to group stuff that is in inbox but ‘shows’ in the main database.
I am on DT2 still and will probably upgrade in the New Year. I am too busy at present and will just get caught up in exploring the new version otherswise.
Does what I say make sense? Don’t take up too much of your time to reply if you do, it isn’t necessary. I am thinking now more in what I might call ‘strategic’ terms than IT terms you might say and finding paths through the capacities of my apps.
Thanks for a fantastic app and support on here by the way.

and I think an outlier among your customers.

I wouldn’t make that assumption. We have a very broad clientele using DEVONthink in very simple and very complex ways.

Stepping in here… Use DEVONthink in a way that makes sense to you. If that’s just using the Global Inbox, go for it. If it’s multiple databases, that’s good too. 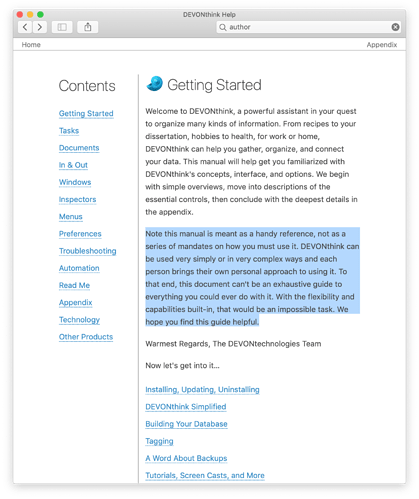 There is a ton of flexibility in DEVONthink to accommodate many working styles and ways of thinking about data organization. Those choices are yours to make.

Thanks BLUEFROG. It is nice how you guys don’t make one feel one has to be a coder or IT expert to be welcome here. the app is the same by the way. I know it takes scripts and I am getting there but it is very newbie friendly actually. More than it is given credit for in fact.

You’re welcome and thanks for the encouragement!

We have people doing all manner of research and analysis.

And we have everything in between.

There are many misconceptions about DEVONthink and the mythological “steep learning curve”, misconceptions we hope are fading in peoples’ minds.
In the documentation, I really tried to press the point home: It’s for anyone who wants to use it, not just nerds and code junkies, and not just business people or academics… even if it makes those groups of people happy too!

PS: This is actually covering three user accounts on this particular Mac but as you can see, databases can be big or small and as many as you feel you need… 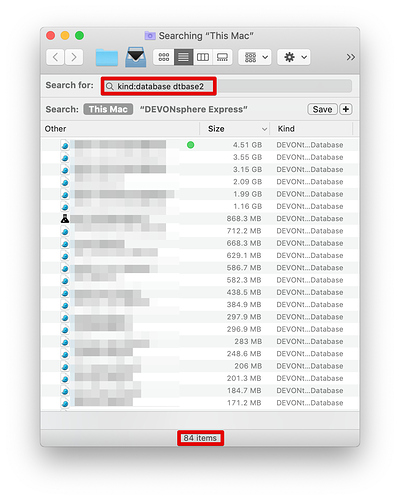