I am using the “Update Item Metadata” action in Shortcuts for iOS. My issue is specifically with the tag section of that action.

I have two separate issues. The first maybe something that Apple is responsible for.

This does not happen when I do the same kind of thing in AppleScript.

Shortcuts is definitely not AppleScript.

I am traveling but will do when I get a chance.

Here is the link to the shortcut: Tag Test. It only has three actions: 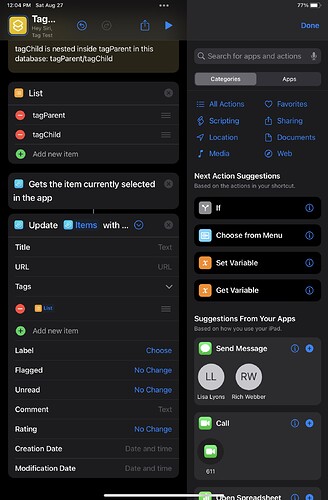 After running with only tagChild in the list you get the expected result:

But if you add the tagParent to the list then you get this:

which additionally puts the item in the tagParent which is the problem.

I just added both tags manually in DTTG expecting to only see the item in the tagChild group … but, unexpectedly the item shows up in the tagParent group as well.

I do this all the time on my Mac with no issue but it now looks like this might be a DTTG issue, rather than a shortcut specific issue.

I do this all the time on my Mac with no issue but it now looks like this might be a DTTG issue, rather than a shortcut specific issue.

?
Are you saying you’re running the same shortcut on your Mac?

What I meant to say was that I regularly add both parent and child tags to an item on the Mac via AppleScript for sure, and manually I believe (away from my Mac right now).

But as I said this doesn’t seem to be a shortcut issue, but a DTTG issue.

While @eboehnisch would have to comment on whether he feels this is a bug, it doesn’t logically appear to be so.

Why are you including the parent tag in the list?
Applying the child tag automatically inherits the parents, grandparents, etc.

This works as intended:

@eboehnisch - thanks for describing the behavior in DTTG, I would just note that the behavior is different on the Mac which is why I jumped to the conclusion that it might be a bug.

On the Mac, the item is only added to three parents tag1, tag2, tag3, not the parent tags123 whether you add just the child tags, or both the child and parent.

I have done all my processing on the Mac until recently and am now trying to move some processing to DTTG. In this case, it just surprised me but doesn’t affect any work so this post is just a FYI.

I am excited to use DTTG more in the future and am putting some effort into making this work. I have run into another issue relating to tag inheritance but will post it separately so as not to bury the story.

On the Mac, the item is only added to three parents tag1, tag2, tag3, not the parent tags123 whether you add just the child tags, or both the child and parent.

Same in DTTG; the parent tag tags123 is not actually added but virtually. Same as on the Mac: add a sub-tag and its parent tag appears in the item’s properties too.

I’m not explaining myself very well, and I apologize for that.

I understand that the underlying data is the same on DT and DTTG. My only comment was that the UI presents that data differently in the two versions, which confused me. Especially because I was developing a tool and comparing results back and forth expecting any differences to be due to bugs in my tool.

… and again, no worries, just information for you from a user’s perspective using both apps - both of which I truly appreciate.

We have some tag fixes coming in the next maintenance release.

Thanks for the info @BLUEFROG.

By any chance does that address my other post: “Nested tags and tag inheritance not working as I would expect in all cases.”

If not, given no specific response in this forum, then I would like to start a support ticket.

The issues being addressed relate to tags not appearing in the Info popup, duplicate tags being made, and tags being set as excluded from tagging.