DTTG first crashed when trying to open it in split screen. After that, it wouldn’t open and crashed every time. Not knowing what else to do, I deleted it and reinstalled it, then went through the sync process.

I sync the desktop version to both Dropbox and iCloud (kit) and first tried to sync from Dropbox. It would not finish, giving me an error saying there wasn’t enough drive space. Thinking that sync was corrupted, I switched to iCloud. Same thing. Looking at the space in Settings, it’s showing me the Documents and Data is using 90 GB of space. All the databases I am syncing total less than 25 GB.

What version of DEVONthink To Go are you running?

I opened it up this morning and it tried to download files, but stopped. Clicking on the cloud icon with the triangle, the latest message is “Insufficient disk space to import database.”

Looking in the iPad settings for iPad Storage, I’m using 157.7 GB of 256 GB, and DEVONThink is using 90.76 GB. As noted before, that’s several times larger than the real size of the database, which is 19 GB, as reported on my Mac.

I’m editing to add the following. Looking in my Dropbox folder on my Mac, it indeed looks like it’s 90 GB of data in Dropbox > Apps > DEVONthink Packet Sync > DevonThinkSync.dtCloud.

You shouldn’t have a Dropbox/Apps/DEVONthink Packet Sync folder on your Mac, as noted in the Help > Documentation > In & Out > Sync > Dropbox section… 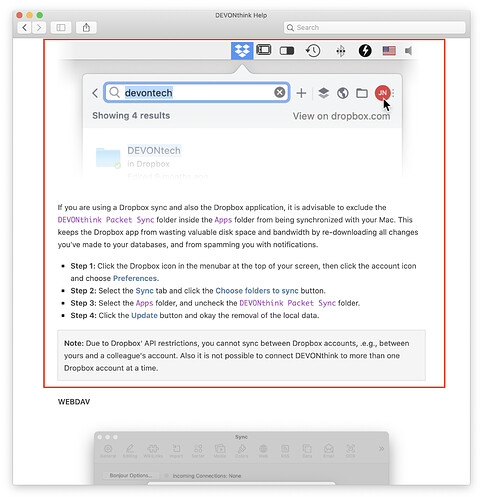 Also, if you select the Dropbox sync location in DEVONthink’s Preferences > Sync, what do you see in the Remote section of the databases list on the right?

Hmm. I remember having done this a long time ago. I think what happened is I was preparing to get rid of Dropbox several months back. Then I realized I still use it for DTP syncing and I think I “re-added” everything back. Seems I’ve made quite the mess, as I now see multiple dupes.

Also, if you select the Dropbox sync location in DEVONthink’s Preferences > Sync, what do you see in the Remote section of the databases list on the right?

I see the section on Sync Cleaning in the DT manual. Is there anything I need to do on the app side before I go through this?

Is there anything I need to do on the app side before I go through this?

No. Cleaning a sync location only cleans the sync data. It has no effect on the local databases.

Let us know how it goes.

Follow up:
Cleaned the sync locations. Deleted databases on the mobile devices. Waited overnight for any background processes to finish (iCloud’s a mystery and wanted to make sure all was deleted and gone). Then re-established the sync and waiting overnight to allow everything to sync and balance.

All seems fine now. Thanks for the help.

To many people outside Apple as well!

Glad to hear you’re back up and running!