I just discovered something which might be a small rendering bug: I’m totally in love with bullet point lists which have a bold heading and some text in the following lines of each entry. In DEVONthink 3 Pro I tried to use this approach with Markdown and I worked fine for me. It looks exactly as I want it.

But when I try to sync the very same document to DTTG the rendering looks broken in terms of the line heights. It looks like DTTG adds an unwanted margin or padding to each line - see red arrows. 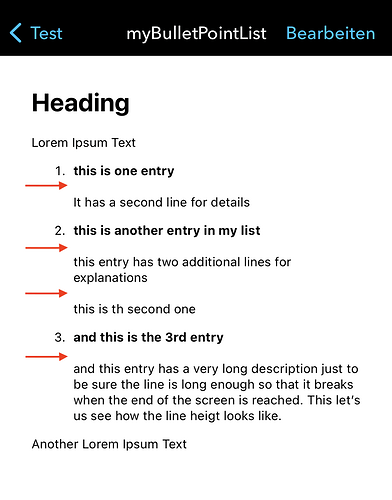 I successfully applied a CSS setting which is able to manipulate the element within a list entry.

Can someone give me a hint how to get rid of the margins in DTTG? Did I do something wrong?

i’m not sure that your CSS snippet has anything to do with the additional “padding” after the first/before the second line in a li element. If I convert a small example along your lines to HTML in DT, I get this:

(No idea why this &nbsp; is in the normal lines but not in the first ones).
I’d guess that the br elements are causing the problem. The line heights are in fact ok on both platforms.

I’m quite certain that this has nothing to do with DT(TG), though. To make sure, you could convert the MD file to HTML on your Mac, sync that and see what it looks like.
Just did that and saw the exact same problem you’re describing: The br element causes an empty line both in the rendered MD and in the HTML on iOS.

Given that the HTML is corretly displayed in Firefox, Safari and Chrome on macOS, I’d chalk the problem up to WebKit on iOS.

To fix, add this to your CSS:

and get rid of all the escaped new lines (they’re not necessary).

I agree, my CSS only addressed the whole <li> object and not particular elements within the <li>

i’m not sure that your CSS snippet has anything to do with the additional “padding” after the first/before the second line in a li element. If I convert a small example along your lines to HTML in DT, I get this:

Therefore your idea to set display: block for the <strong> element is quite nice. This indeed forces a line break and the forced line break via \ seems needless.

On the other hand there are some good reasons for the manual forced line break (putting \ at the end of a line) because it gives some more flexibility which I often use. Let me extend my example a little bit:

I followed your advice and exported the .md file to html. This is what the export delivered for the second entry:

Looking at the differences of the outputs of DEVONthink vs DTTG it looks like the <br/> tag is handled differently. Maybe <br/> in DTTG is displayed as two line breaks? hmmm

I also found out that it is possible to address DTTG in CSS using @media rule.

maybe this is the key for this issue?!

What’s wrong with setting the display attribute? That works on all platforms. I wouldn’t use media queries but for rally size-dependent attributes.

Also, this is not about DT vs DTTG, but about the different WebKit versions. DT and DTTG rely on this framework for HTML display.

I’m confident that Safari on iOS shows the same behavior.

Thank you for mentioning this. We will have a look at the built-in CSS that DEVONthink and DEVONthink To Go use for Markdown and harmonize the styling here.

Tank you very much! That will help me a lot.

Thank you for mentioning this. We will have a look at the built-in CSS that DEVONthink and DEVONthink To Go use for Markdown and harmonize the styling here.

What’s wrong with setting the display attribute? That works on all platforms. I wouldn’t use media queries but for rally size-dependent attributes.

I tried it out. The usage of display: block as you mentioned would break the first and the last entry of my latest example. As it forces a line break before and after the <strong> element, it would lead to unwanted line breaks when it comes to the usage of a
bold
word in the middle of a sentence.

As soon as I have the time, I can try out to compare the behavior of WebKit between the iOS and MacOS (using my example as HTML) and share my knowledge with you. And of course I hope that the mentioned harmonization of the CSS used by DEVONthink and DTTG (by eboehnisch) might help here

Just some thoughts, not related to the display problem here.

I have the impression that you want to mix semantic markup and presentation in a manner that’s bould to cause trouble. Like “the first line of every li element should be bold. But I also want to have some of these lines where not everything is bold.” So it looks like a heading, but in the disguise of a list element.

You can actually not have h1 (or h2 or any heading) element inside a li in HTML. And I suppose that’s for a reason. And perhaps you’re looking for dt/dlinstead (but that’s probably not available through MD).

A similar reasoning goes for the hard line breaks – what should they convey? The people over at MDN say that br might be used in addresses or poems, but that’s not what you’re doing here (or are you?). So why have those hard line breaks, instead of maybe a sub-list?

And perhaps you’re looking for dt/dlinstead (but that’s probably not available through MD).

Maybe this can help

First Term
: This is the definition of the first term.

I use definition lists in Markdown. My only concern why DEVONthink To Go does not make empty line between lists.

I should probably read the MD reference

My only concern why DEVONthink To Go does not make empty line between lists.

If you now understand it does not do what you want, why don’t you do what you want and add an empty line where you want it? Or use an editor on your iOS devices that edits MD files as you wish. Simpler.

We have fixed the issue with the additional line breaks inside a list for the next major release.

Great! Thank you very much