Is that correct? How can this be resolved?

Version 3 was removed from that device after family sharing failed to be recognized (purchase from App Store, previous purchases, family sharing etc. and version 3.0.1).

We move the sync configuration over to V3 upon installation. This prevents from two identical syncs messing it up for each other. This is similar to what DEVONthink 3 on the Mac did. But you can safely add the sync again in V2 which gives it a new internal ID and now both will be able to coexist.

As for Family Sharing: Was it activated on the original device; did you download DEVONthink To Go on the other device from App Store > Account > Purchases > [the account on which the in-app purchase was made]? We have reports that it worked when following that procedure.

In the end I decided to purchase the app twice, as downloading it whatever way doesn’t help in recognizing a previous purchase through family sharing, and staying stuck on version 2 awaiting resolvement of the issue is not something I’m keen on doing.

But then things got nasty. DTTG 3 was removed and installed multiple times on that device and following the second purchase, installed once again. This time all the sync settings were gone, although DTTG 2 was still on the device. I’ve entered the sync settings again (WebDAV server) exactly as they are on all other devices apparently not, see update below. Then DTTG 3 started to sync, but immediately reported a warning that conflicting items could result in loss of data (yikes!).

That obviously wasn’t something I was expecting, denied progress and immediately stopped all syncing. It seems the data on the sync store was intact following that incident, but why it happened completely puzzles me and was something of a frightening experience to be honest.

I then removed both DTTG 2 and DTTG 3 from the device and restarted the whole procedure once more (sigh). So the be clear, to DTTG it’s like I’m using a clean DTTG 3 installation without prior use of DTTG2 that was bought as a new app (the ‘Free’ option is gone as DTTG2 is gone I assume). I re-entered all sync details again and tried syncing. DTTG 3 now connects to the WebDAV server but it only sees the Global Inbox. All other databases do not show up for some unexplicable reason.

Now what? Sync the Global Inbox first? How do I get to connect to the other databases?

Update: interestingly, the devices with DTTG3 that were upgraded from DTTG 2 correctly transferred the sync and correctly sync with the WebDAV server. The device above connects to the WebDAV server, but doesn’t change the name of the sync store. It’s still called ‘WebDAV’ and not the name that is used by the other devices.

Update2: found the (user) error I think. The name of the sync store is already filled in as ‘WebDAV’ but the encryption key is (obviously) blanked out. As you cannot change the name ‘WebDAV’ on top of the screen, that made me assume the name ‘WebDAV’ was not user changeable. In fact, it appears the DTTG 3 will create a new sync store called ‘WebDAV’ I presume.

Suggestion: remove the prefilled sync store name ‘WebDAV’ by having it blanked out and perhaps suggest a default name to prevent user error, or otherwise nudge the user into making a deliberate choice of a sync store name as that might have been changed to something other than ‘WebDAV’.

Suggestion: remove the prefilled sync store name ‘WebDAV’ by having it blanked out and perhaps suggest a default name to prevent user error, or otherwise nudge the user into making a deliberate choice of a sync store name as that might have been changed to something other than ‘WebDAV’.

We provide a default name as a convenience. Development would have to assess changing this behavior.

From my point of view it would be more logical to leave it empty and ask the user to actively provide a name as I now understand multiple names can exist and it needn’t be ‘WebDAV’. I don’t recall, but I’ve probably fumbled around with that same issue in the past, but the sync settings are typically something a users sets once and never looks back at afterwards, unless required to do so.

Yes the current behavior is due to user requests and confusion about entering a store name.

I’ll start up the DeLorean Marty! 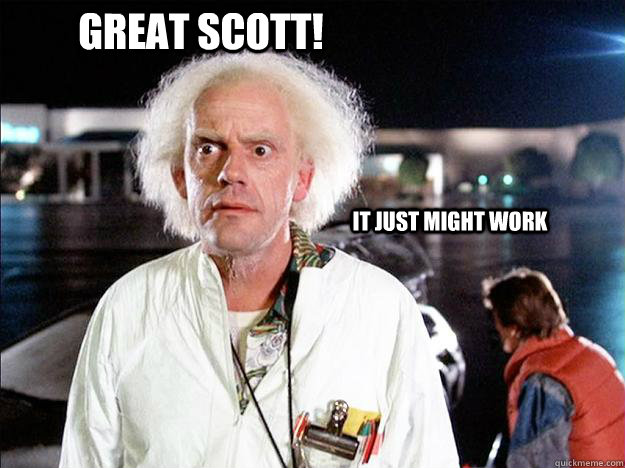