Just getting up to speed on DTv3 … overall some very nice additions (though the UI is pretty cluttered). BUT there seems to be one feature from DTv2 that got dropped in DTv3 that I use A LOT:

The Style drop-down in the Editing Bar (when editing a Rich text document).

This has really impacted my productivity. I create a LOT of formatted notes, and use styles to apply that formatting quickly and easily from the drop-down. But it doesnt appear to exist in DTv3, which means I’m stick with Format > Style > Styles… and click “Favorite Styles” button to reach them. Which is, to be blunt, cumbersome and horrible.

Any chance the drop-down could make a come-back in a dot-release of DTv3? I realize it’s not the most heavily used feature in DT, but looking at all the other little buttons all over the place in the main window I dont think it’s such a big ask??

You are looking in the wrong bar! DT 3 has an Editing Bar and a Format Bar, the latter being the one with the styles drop-down list.

Having both of them bars for Rich Text notes seems a bit inconclusive. And the position of the Format Bar buttons—above the left-most pane instead of the note pane—and the fact it is even tinier than the Editing Bar gives the impression it is kind of unwanted.

But it is there and you can activate it via Format/Show Format Bar.

You are right … thank you. I’d seen that bar but it was all grayed and so didn’t realize what it was (I had the wrong type of document selected I think). Thanks very much!

I agree, however, that it is very curiously located in the UI.

Even more curious, on my computer (US English), the drop-down in the Editing bar for italic/bold seems to use … er … well, Italian I think! It shows “Cursiva” (italic), “Negreta” (bold) etc. Amusing bug … no other part of the app has this.

On my Mac every customized style I have used over many years and many OS versions at some point in the last months has been erased and I got only the standard ones.

I agree, however, that it is very curiously located in the UI.

Not when opening a rich text file in a document window… 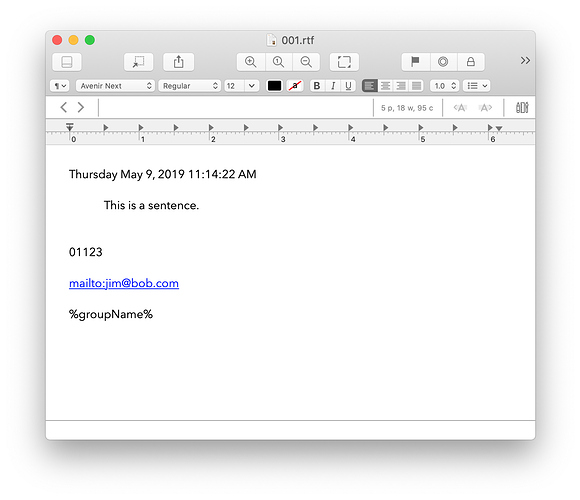 Ah yes, I’d not tried that. Makes more sense in that view.

It’s still in Italian though (well, I think its Italian).

Those styles are reported from the operating system.
I would check Apple’s FontBook and potentially reboot the machine.

Well, you are correct, it seems to be macOS not DT (hooray), since it shows up in TextEdit also. I suspect its Catalina, since this is when it first appeared. I’ve rebooted (no difference), and checked in FontBook (everything looks fine). This only happens certain fonts (Verdana, Trebuchet) which (suspiciously) are the MS ones. However, I’ve scanned for extra/bad copies of these font files (from bash) and can find nothing apparently wrong. FontBook shows the fonts with the English names, but all apps show foreign. Very odd. Not DT problem of course, but I’ll report back if I find a cure that might be relevant if others come across this issue.