just searched my computer for all files containing the word “virus,” and ordered the results by KIND. My pdfs are not all grouped together. Toward the top, after the folders, it lists a large number which it calls “'PDF '”; lower down, there’s a smaller group, which it identifies as “pdf”.

I’ve attached a screenshot showing both. Any idea what’s going on? 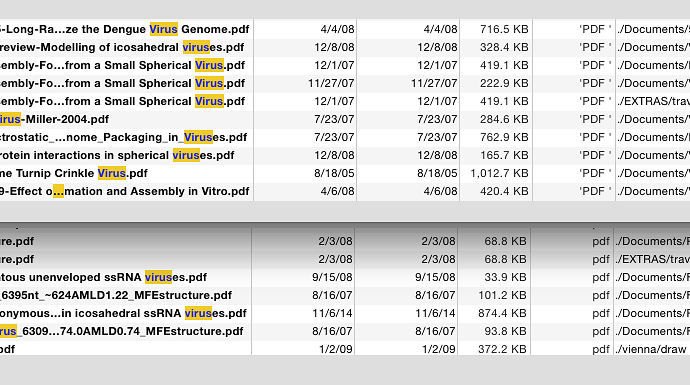 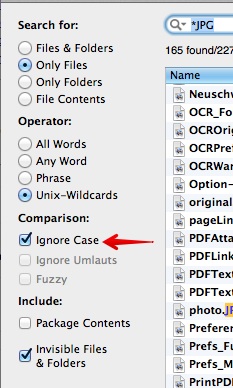 You have this unchecked as pdf is not equal to PDF.

Hi Jim,
Thanks for taking the time to reply. And nope, “Ignore Case” was already checked for that search. [See new expand screenshot collage, below.] Note that the “Ignore case” option in EasyFind applies to the search term only, which in my case was “virus”. It thus does not help with the problem of “pdf” vs “'PDF '”. Note also that the difference isn’t just case, it’s:
pdf
vs.
‘PDF ‘.
In addition, I found there’s a third designation EasyFind uses for pdf’s: "’ FDP’". Note that here it puts the space at the beginning (i.e., before FDP) rather than the end (like it does with PDF). See attached screenshot. [EDIT: I JUST NOTICED YOUR WEBSITE CUTS OFF THE RHS OF MY PICS, SO IN MY FIRST POST YOU COULDN’T SEE THE pdf OR 'PDF ’ DESIGNATIONS UNDER THE “KIND” COLUMN. THE SECOND PIC, HERE, DOES SHOW THIS. IT COMBINES SCREENSHOTS FROM THREE DIFFERENT SCROLL POINTS FROM WITHIN THE SAME SEARCH. THIS SEARCH WAS FOR “CV”.]

I’ve checked what Spotlight does with these. In Spotlight, what EasyFind calls “pdf”, “'PDF '” and “’ FDP’” are most commonly called “Portable Document Format.” However, there is a second category of pdf’s that Spotlight identifies, which is “Adobe PDF document”; the few of these that I’ve checked are identified by EasyFind as “pdf”. So basically Spotlight has two categories of pdf-type-documents, and EasyFind has three, and these are different and thus overlap.

So my questions are:
(1) Why is EasyFind treating these pdf-type documents as being of different types (e.g., just as a guess, could it be related to pdf vs pdf/A), and why are its categories different from Spotlight’s?
(2) Any way to get it to combine all three together?
(3) What about the documents missing from its search, shown in the last pic? 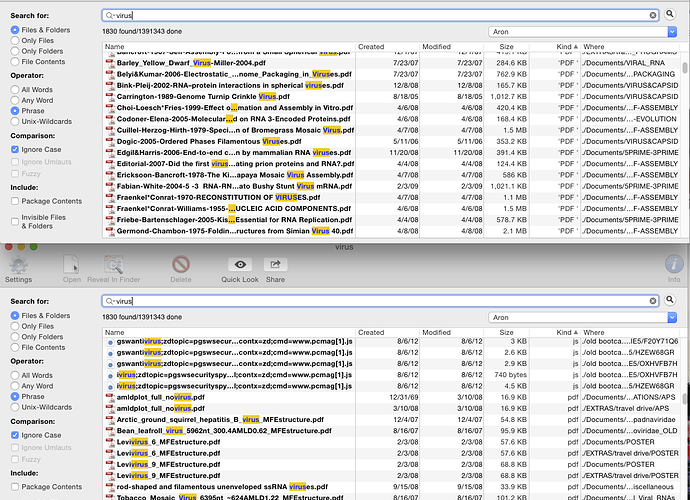 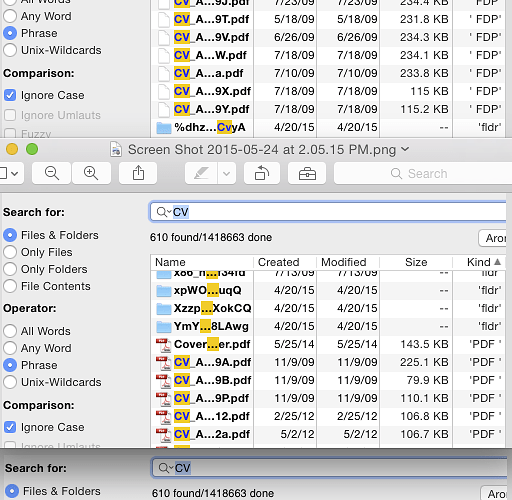 My suggestion would be to either have EasyFind treat all of these as a single document type; or if there’s some good reason to maintain the distinction*, then when EasyFind’s algorithm is instructed to order search results by KIND, it would really make much more sense to have have these three types follow one after the other, since they’re all pdf’s of one sort or another.

*What is “’ FDP’” anyways? I searched Google and it’s not listed as a known document type. Note that it’s an exact reversal of “'PDF '”, so maybe EasyFind is doing this inadvertently.

EasyFind is reporting the file type the is encoded in the file by whatever application created it. …Personally, I would not want EasyFind to be making the kind of judgments you suggest about combining results.

Actually, it seems that both EasyFind and Spotlight are already making judgements, since the categories into which they subdivide pdf-type files are different. I agree with you that I don’t want either EasyFind or Spotlight, nor the encoders, making judgments. Rather, when I create and save a file, I’m the one that determines if the extension is acceptable. I would therefore like the files to be grouped according to their listed extensions, since these are what I have control over, and they’re what I can see myself when the file is listed.

Also, note that this doesn’t mean that pdf, PDF, and FDP all need to be merged into a single group, based on sharing a common extension. Rather, given that these all have the same .pdf extension, wouldn’t it at least make the most logical sense, and maximize usability, if these three groups were displayed contiguously when the search results are ordered by KIND? I.e., if EasyFind doesn’t want to merge pdf, PDF, and FDP files together, then wouldn’t it make the most sense to have these three groups of files – which, again, all have the same extension – appear one after the other when the ordering is by KIND, rather than having the three scattered well apart within the search results??

Indeed, should this not be a general principle when ordering by KIND, namely that if you have X different groups, all of which contain files with the same extension, that these groups should be listed contiguously? That way you maintain the separation you want, yet provide the logical grouping that I (and, I think, many people) intuitively desire?

Think about it – if someone is looking for a .pdf file, they really don’t care what the developer called it, they want a file that programs which read pdfs will recognize as such, which generally means files that end in .pdf. And what’s most easy, therefore, is if all these can be found together in the same spot – and easy is, of course, the raison d’être of EasyFind. If I’ve got a long list of results, I don’t want to have to manually scroll through all of them to find all the scattered groups that have .pdf extensions. That’s not easy – that’s me doing the work, instead of the program. And I don’t want to have to create more complicated searches in which I always include a search term that corresponds to the desired extension. Because that’s not easy either.

Hmmm … actually, it is OS X that determines if the extension is acceptable.

More importantly, your reply misses the the broader point, which is that when I create files, I don’t monitor how the developer codes them, I monitor things to ensure the extension it gets corresponds to the type of file I want it to be. These finder programs should be as easy and intuitive as possible, and having a bunch of files, all of which have .pdf extensions, and are thus thought of by the user as pdf’s, scattered across different categories that are listed far apart, is non-intuitive.

So what would be your argument against my principal suggestion, which is listing different file types that share the same extension contiguously?

Truthfully, there isn’t a problem here. The files with ’ PDF’ are made by an app (likely an Adobe app) that still adds a Creator and File Type (which is what the ’ PDF’ is). They were deprecated by Apple years ago but they still persist in some apps. The other files which just read pdf, have no Creator or FSFileType but are mapped via the UTI as a PDF file. The one with ’ FPD’ has been issued a different (and possibly incorrect) FSFileType but the UTI from the extension still maps it as a PDF file.

If you want you can start a Support Ticket and attach an example of the FPD file.

Also, you having the ability to modify a file extension is not a good idea to exercise in most cases. I can change the extension of a PDF file to .rtf which will change its UTI (universal type indicator). However, this makes it a kosher RTF file no more than changing my name to Prince Charles makes me royalty.

Right now EasyFind displays either the extension or the HFS type, a future release will unify this and display the same kind as the Finder.