EasyFind appears to be broken on Apple Silicon or Monterey

I was looking for text strings in some files’ contents, and wasted quite a bit of time trying to figure out how different versions of them appeared from the same source on my two Macs.

As it turns out, the files were the same, but EasyFind is broken on my M1 MacBook Pro. I copied the same files to each computer and ran the same search on them with the same version of EasyFind. The search correctly found the target string on Intel, but not the M1. Screen shot attached. 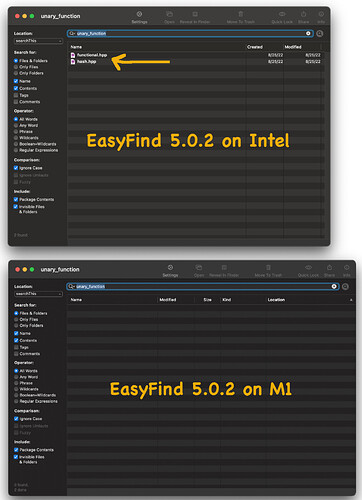 .hpp is not one of the default extensions, it was probably only added on the Intel machine to the settings drawer.

“Scan all files” is checked in the settings. And I would expect that to be the default, by the way.

And I would expect that to be the default, by the way.

It isn’t and that’s intentional as it slows down the contents search a lot and as this scans really every file but it makes only sense for text-based files.

Anyway, are the files located on a network volume?

If all I wanted to do was scan superficial files I’d use one of the tools provided by Apple. Anyone who goes to the trouble to find and install this product is obviously unsatisfied with those and wants to do a proper, comprehensive search.

And no, the files are stored on the internal drive of each computer.

What would be the point of scanning JPG or audio files for text strings? So, obviously a program searching for text (!) should only search in those files that can be considered as such.

Also, Staying calm and polite might get you a lot closer to a solution. Getting all railed up about a perceived problem in a free program seems to be a bit over the top.

Nobody’s “railed up” nor impolite. Are you in the right thread?

I appreciate that it was not your intention to be impolite. I feel suggesting the developers have made a “major error in judgement”, using the term “that’s that” and ending a sentence which describes your expectations with “by the way” can be construed as being impolite or mildly aggressive. There may also be a subtle difference between “I had expected that to work” and “I would expect that to work” too.

The tone of the forum is generally highly congenial. @chrillek provided you with insight as to how your tone came across to him; I share his view. Make of that what you want, of course - you cannot, however, argue with somebody over the impression you made on that person.

Please don’t misunderstand me: you are invited and most welcome to provide feedback, show up shortcomings and make suggestions which might make DEVONtech’s software better for all of us. Different users are likely to have different requirements and priorities, though. DEVONtech’s ability to cater to many of those is one of its strengths.

Going through the thread, it is not clear to me whether your problem has been solved or remains active; I’d be grateful if you could provide feedback.

Sure. And, let me point out that Devontech has been quick to respond to a bug report and stated that they couldn’t repro the problem, and asked if I had enabled full disk access (which I had).

I appreciate the fact that not only did they actually READ the report and respond with a personalized message, but did so quickly for a free product. +1 for them, to be sure.

Because I had an immediate need for a solution, I installed Find All Files and so far it has been behaving as expected. I don’t find its UI as quick to use as EasyFind’s, however.

Thanks; I’m sorry to ask again, but I still haven’t figured out whether you are still seeing the problem described in your initial post, or whether one of the suggestions along the way has resolved the situation - could you please put me out of my misery (and anybody else who might have an M1 and be prepared to try to reproduce the issue)?

Oh, right, my bad for not answering that part. I deleted the app so I can’t answer that until I reinstall it (not on the same computer right now).

In the interest of thoroughness: Which suggestion did I not address? I said no, they are not on a network. The app had full disk access. And “scan all files” was checked, although I checked that on the Intel system and don’t know what state the M1 was in before I deleted the app.

I don’t recall ever having gone into that preference panel on the Intel system, but it would’ve been years ago so I guess it’s possible. My contention is that this should be enabled by default because it’s easier to remove unwanted results than it is to divine that there should be more results than you’re getting (and then investigate why). A user may never know that he’s missing files; but he’ll always know if he’s getting more than he wants.

Cheers; I look forward to your feedback at that point in time. There are a good number of users with M1 macs in the forum - and whilst I would guess most will be using DEVONthink, perhaps an EasyFind user or two might provide some insight.

It said it was my bad for not addressing that in my earlier reply, although I’m not sure what questions are left outstanding. The files were not on a network; the app had full disk access; and the Intel system had “scan all files” checked but I’m not sure what the state of that was on the M1 before I deleted the app. I do not recall digging around for that preference panel on the Intel system, but I installed the app years ago so it’s possible that I did. I will need to reinstall and check.

Meanwhile, my contention that EasyFind should scan all files by default is based on the fact that a user can’t be expected to divine that he’s missing results that should be there, whereas he will always notice getting more results than he wants. I would expect a product that a user has sought out and installed for enhanced search functionality to err on the side of completeness.

It did - I was just wondering whether I should have a glass of wine and see a psychiatrist… if we both suffered the same illusion though, then it was probably real. Weird, I’ve not seen that happen before; I’ll report the occurrence to Eric.

a user can’t be expected to divine that he’s missing results that should be there, whereas he will always notice getting more results than he wants.

Thanks - I find it’s always really helpful to hear the logic behind an assumption - we don’t all think the same way, and I guess the probability of something being changed is increased when the steps a user comes up against become more clear.

I will need to reinstall and check.

I’d be grateful if you come back here when you have done so and let us know whether things are working as expected then.

Will do! And… I got an E-mail saying that a bot deleted my post and it will be “reviewed.” I can’t imagine what triggered such a thing, since there wasn’t (as you could attest) the slightest controversial language in it.

There wasn’t - and I can’t even see the post as hidden, so the “bot” must be mod-level at least. I’m sorry about that; I can’t see any reason your post should have been deleted. As I said, I’ve messaged Eric (DEVONtech’s president) asking him to check.

Your response is back from the dead.

In the interest of thoroughness: Which suggestion did I not address?

To be honest, because the thread drifted away from the main topic slightly, I was simply unsure whether you had received the help you needed or not. I saw a risk that I was providing you feedback on something you hadn’t asked after, whilst ignoring your main concern. In such circumstances I prefer to default to returning to step 1, so to speak - that avoids me missing an opportunity to do something useful.

I’m not sure what was flagged by Askimet, but I saw nothing untoward in the post and marked it as Not Spam.

Thanks for clearing that up, Jim

I reinstalled and found “scan all files” not checked on the new (M1) system, which explains the problem. I noted a couple of things I’d suggest changing (in addition to making “scan all files” the default):

There’s nothing under Preferences except “Quit when last window is closed” (which, by the way, is on by default and I appreciate that). I don’t see any other menu item that gives you access to additional search options, so I suggest adding access to them from Preferences.

Anyway, thanks for the follow-up!