When I find files that require my admin password to delete, I get the window asking if I want to delete them. So far so good, but when I click to delete, it doesn’t delete them so I always have to click Revel in Finder and then delete them manually, by hitting delete and type my password.

I’ve been experiencing this since older versions, from different computers and different operating systems. I contacted the developer last year or so to see why this happens, but I didn’t get an answer on “why” it happens and “when” it’s going to be fixed.

Can anyone explain what’s going on with this? If we have the button to delete the file, but it doesn’t, what’s the purpose of the button anyway? It could at least just say it was a protected file/folder, that I need to go to finder and instead of the Delete button, have the Reveal In Finder button to make it clearer, faster and easier.

Appreciate any help with this

Can anyone explain what’s going on with this?

EasyFind doesn’t support this yet for items that require admin authentication. Both a feature (to avoid loss of important files) and a limitation depending on the point of view.

I understand that clicking a button and deleting important files should be a protected feature, but if that’s the case, then why this window if the button doesn’t do what’s supposed to do?

Another option would be to change the text to something like “Do you want to reveal the file(s) in Finder so you can delete it/them manually?”
And then the button would be Reveal in Finder instead of Delete.
Hope it’s making sense…

Up until now, all the files I tried to delete that showed me this warning, were never deleted using the Delete button, so I don’t know if there are any exceptions at all that make this feature work? I haven’t experienced a single situation where it worked. Can you clarify the reason for this window as an “action” that people can take, but doesn’t work?

This is just an ordinary alert, not the required admin authentication for this operation.

This is just an ordinary alert

But as I said, if it’s just an alert, why the Delete button and why the “Do you want to delete them immediately?”
Why not make those changes I mentioned to reflect an alert and not an action people can take?

See above, just not yet supported.

“Yet”?
This has been showing this window for years with the exact same behavior.
Why not just change it to something that reflects what it actually does? If it’s not supported “yet” then why have a button that says Delete, but doesn’t delete?
Why have a text that asks “Do you want to delete them immediately?” if it’s not supported and won’t work?

I think my question is pretty simple and straight forward. It’s like having a car with a button that says “click here to open all windows” but when you click it, nothing happens. Then why have the button in the first place…?

I’m really not getting the mindset on this, to be honest…

This is what I would expect. One of the options would be better than the current one: 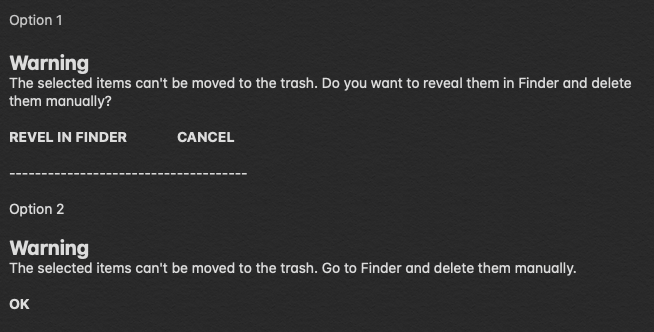 EasyFind is freeware and therefore has the lowest priority, that’s all.

I understand that, but it’s still a product that you put out there and having a feature that’s not working as it’s supposed to, seems to me that it doesn’t make sense, that’s all. I don’t think that being freeware is an “excuse” not to deliver something that works as expected. But that’s just the way I think. Especially because sometimes the free stuff can be a way for people to end up going to the paid stuff.

This is not a big deal, because the app works for most of the stuff and while we were exchanging these messages, I ended up creating a macro inside Keyboard Maestro to do just that. I still think you could fix this, at least by changing the text and removing the Delete button and renaming the Cancel button to just OK.