As I experiment currently with using md files for my notes I imported a bunch of it into a new DT database. I really like the “See also” function of DT and want go use it to gain additional insight into my stuff.

Before making a change to a md file, the “See also” works as I expected and shows me a bunch of related files. See the “See also” section for a specific document here: 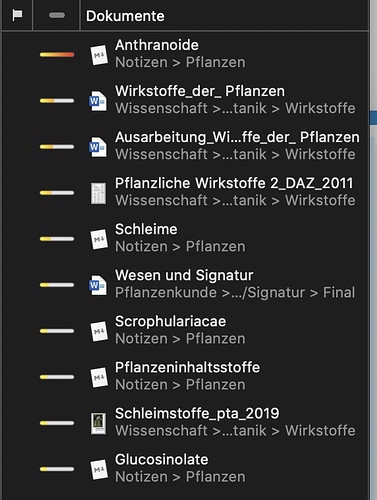 After opening the edit mode of the md file with ctrl + cmd + x and only erasing an empty row, the “See also” section changes into this: 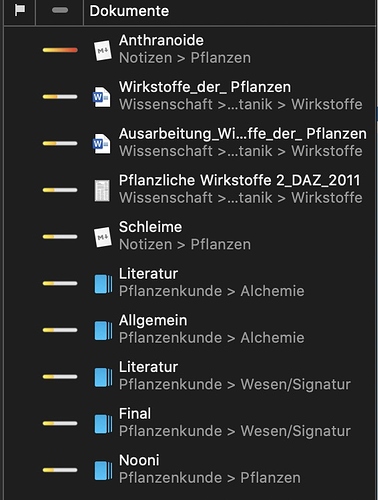 The section now shows groups instead of the last documents that were shown before the edit step of the document. Why are there groups shown now? And why does this happen even if I made no real changes to the document. I mean erasing an empty row does not change the content of the file, or does ist?

Really annoying is that the groups which are shown now are a not really suitable for the documents, so the “See also” function is not very helpful any longer…

Am I doing something wrong here? Is there something I have to configure to prevent this happening?

Thanks for reading and if you have an idea what I could change I would bei grateful to read it here!

Edit: This happens with indexed files, too. I tried this out with a test vault from obsidian. If I open the indexed md file (iCloud) and edit it in DT, the “See also” function gets confused…

I can add the following.

My second MBP (same OS, same Version of DT) does not show this behavior. Here I can edit the md document and the “See also” stays safe.

On the first machine even a newly created md file, created with copy and paste from an unmodified md document from machine 1, gets “corrupted”.

So it seems that something is wrong with my installation or the settings on machine 1.

Is it possible to reset something on machine 1?

Today I tried working with md on my third machine. Same problem here. Immediately after creating or editing a md document “See also” gets confused and shows rubbish.

@BLUEFROG and @cgrunenberg is there anything I can do to prevent this from happening? Some setting to reset or something else?

Any help would be greatly appreciated! Thank you very much.

I don’t see how markdown (plain text) documents would cause a problem with See Also. I have a corpus of several hundred markdown documents in several dozen groups, and See Also is accurately proposing recommended documents.

@BurningChrome you discuss “syncing” documents – how are you syncing between machines?

You need to eliminate as many differences between machines as you can in order to test and potentially troubleshoot.

Be sure that all machines are on the same release of DEVONthink.

If you run into any errors along the way, stop testing and open a support ticket from that machine. Hold the Option key while opening Help and use “Report Bug”.

Thanks for your answer. What you proposed I am doing right at the moment. Of course all Mac machines are running the same OS and DT Version, except my mobile devices.

I sync with Web DAV, which worked flawlessly in the past.

I completely emptied the sync store and removed the databases from all machines. Rebuilding on my main machine did not work, so I copied all data over and imported it afterwards back into DT. This gave me an “indexing” dialog which rebuilding did not. Maybe that was needed? Could be an indexing error probably which gave false “See also” results?

After reimporting all data back it seems now to work on my main machine.

Good luck … and let us know your efforts turn out

There’s still the question of how the database problems started to being with, unfortunately

Seems it worked. Everything ist back to normal and running great on every machine. All data is there and no botched results with “See also” any longer. I wonder what caused this trouble and if it would have been possible to solve the problem in any other way…

Thanks for your suggestions @korm!

Have a nice day!