Since iOS 13, I am now seeing my previously encrypted notes show up in the iOS Files app under the “Recent” tab.

I can open the docs in the Files app and see them in plain text.

It was my impression that I was using an encrypted password protected container with iCloud sync that could only be opened in DevonTHINK app, but here I can see my files with no password or authentication from the Files app.

How can I prevent this behavior and keep Files from indexing my notes in plain text?

Your notes are not encrypted on a file-by-file basis. When DEVONthink To Go is closed or not frontmost (depending on the the option chosen in Settings > Security), the data is encrypted as a whole. Once you’ve opened DEVONthink To Go, the files are presented in the normal manner.

Also, this has nothing to do with syncing. Syncing with an encryption key merely stores the synced data in an encrypted state. Thar sync data is not what you’re accessing in DEVONthink To Go.

If you want to withdraw access from all apps in iOS, set DEVONthink To Go’s Settings > Security to Immediately as noted here… 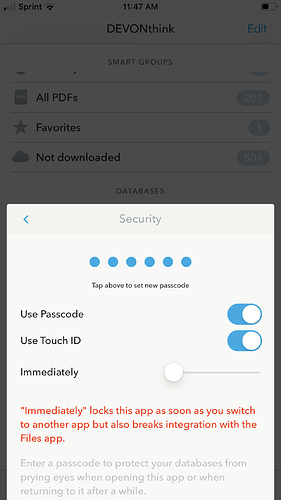 I appreciate the explanation. That is helpful thanks.

Although in this case, it was already set to”Immediately” but am still seeing my notes in Files / Recent.

They are also a bit out of sync, like a note I deleted got added back but it is an older version than what is in DevonTHINK app

The Files app does all sorts of caching. Can you actually open the files that should be behind DEVONthink To Go’s password protection or are they just listed?

I can still open the file in Files app.

Note this seems more related to the “Recent” tab only.
If I go to the folders view in Files and try to look at DevonTHINK it tells me it is not allowed to open files and to change my settings in the DTG app.
But Recent view still picking them up.

I also tested by creating a new file in DevonTHINK Go
and that was added to the Recent view (vs. some stale older files lingering around)
meaning it is definitely adding new files even with the lock “Immediately” option set

Hard to tell if we can block this at all. Noted, we’ll have a look.