Fed up with bugs (unexpected changes?) in Devonthink V3 ("classify" this time)

Today I ran “classify” the first time after installing a new version last week (that one screwed up existinf synch settings, but that was fixable).

Today: I, as before, select a bucket of items from an Inbox of a database A, run “classify” and am presented with this screen: 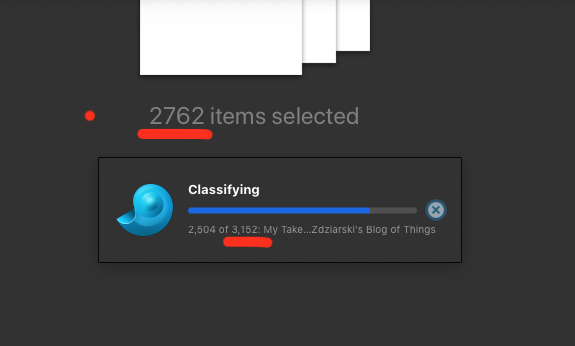 Note the difference in numbers. Ok… Then in the log I see it displaying items in many databases, instead of the database A it was meant to classify into. I remind the listeners at home that until the last v3 databases were entirely separate instances. Having placed an item in one, you could be assured it will not appear in another, and all operations (other than moving items, obviously) were contained per database.

Now I have no idea what Devonthink v3 did - whether it decided to classify all inboxes instead of the one I told it to use or simply run a global classify, ignoring original databases and shoving items wherever it could match a few words. The result is I have a massively messed up 20 gig of databases (there is a reason one might want to keep some articles that mention, say, toilets and toilet paper, in a “toilet” database and some in a “paper” database). Looking at results I see some articles from “Security” database in a “Tibetan” folder in a “languages” database. I ran an “undo” but by now I absolutely do not trust this piece of… software.

“Auto classify” was never reliable, but I sort of had it under control with separate databases (now there is only “classify”, not sure what the difference is but why do I, an end user, even have to care???). It did save time compared to manual classification. Whatever has changed, probably looked like a good idea at the time, in the head of the developer(s?), but the result of the change is surprising to users, it goes against the way Devonthink operated for many years.

I’m currently looking into importing things I care about into Evernote (I have a script that worked with devonthink V2, hopefully V3 supports those Applescript objects) and dump Devonthink entirely, because it has become a waste of time instead of a time-saver. I can clip pages to a bazillion of tools. I have no problems in paying a subscription fee for a tool that works and DOES NOT SURPRISE THE USER!!! (Evernote).

PS I hope you see how upset this made me - after all, I had been using Devonthink since around 2010 and never felt the need to post here. Now I posted twice in a week, all because of the unexpected an unadvertised destructive “features” new version brought.

PPS to top it all up, it just crashed randomly.

FYI, there is an old principle in software development which all successful (haha) software development businesses follow. It is “DO NOT SURPRISE THE USER”. I was pointing out that the supposed “update” not only took my money but broke several important features that existed, and sort of worked, for years until V3.

I wish I could revert my databases to the state they were in a week ago, before I fell for this “update”. At least I knew the bugs V2 had and how to avoid them, now I have a piece of software that does have a slick icon but behaves very differently (on a non-toy data). And still crashes more often than any other software I use

I also have a small hope that someone else won’t fall for the same “feature” - again, this one is with an entirely new behaviour of “classify”.

I’m not even asking for a refund because I think the author needs those $ more than I do.

Please choose Help > Report Bug while pressing the Alt modifier key and send the result to cgrunenberg - at - devon-technologies.com - thanks! Then we’ll have a look at the crash logs as we haven’t received any classify related crash logs since the first public beta.

I’m sorry, if you would like me to beta test your “released” software, I’d like a refund first and ideally payment for the trouble

Otherwise I don’t see a reason to do anything other than broadcast my dissatisfaction over your destroying my data collected during years of “gardening”, and my plans for migrating the salvageable bits our. I paid for this entirely unnecessary “update” and all I got was a nuclear data holocaust. I’m refraining from running V3 now in fears of it doing more harm. I do not want to help you, sorry. Nashled.

PS it crashed about a minute after completing classify, I might have attempted an undo.