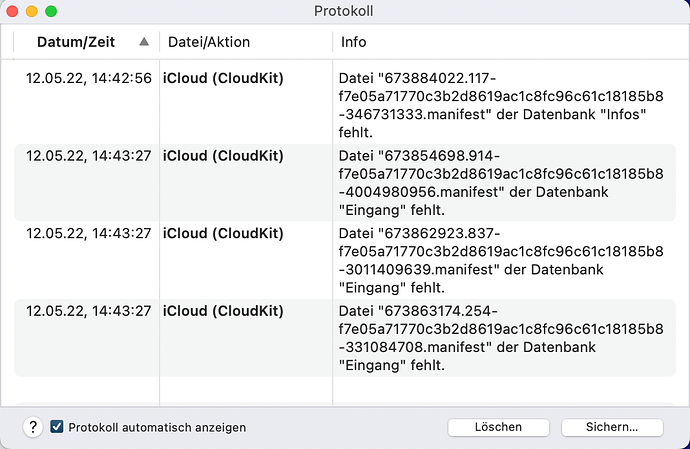 Thanks for the speedy reply. Will do and come back to you in case it’s necessary.

I have not yet figured out how I get to ‘Datenbank bereinigen’. Which is the ‘Synchronisierungsort’
Thanks a lot!

Select the sync location which is in the left pane of Preferences > Sync and Control-click the database in the database’s list on the right.

OK, that’s what I thought it is. There is no function that says ‘clean/bereinigen databank/’; it just says something like fast check (and this what I did). Unfortunately the problem remains (see screenshot)

Hi there, did everything as you said, cleaned the database … but the problem remains if I sync via iCloud (which would be my preferred option). So emptied that as well, re-established everything from scratch, but I still get the ‘manifest’-messages …
This is really strange and the problem occured from one day to another and in my many many years of using DT I never had this (or any other problem either).

iCloud has been very unreliable in the past five months, including several outages. You may want to stop and consider whether you ​need ​a remote sync option and whether another service, e.g., Dropbox, may be a better option.

In fact I was already considering it.
Thanks again for all your speedy responses. Much appreciated!

Your Mileage May Vary, i.e., the experience can be different for each person.

That was a new abbreviation. thx

I am also having the “manifest missing” error with CloudKit sync. Cleaning the entire store does not stop it happening for long.

I note the suggestions to consider not using remote sync, or Dropbox. However, secure remote sync is a fairly fundamental feature of the product for my purposes, without which I would never have shifted my workflows to rely almost entirely on DT; and I seem to recall that I moved to CloudKit from Dropbox after having problems with Dropbox and being told on here that CloudKit was recommended as more reliable.

I really don’t mind which of the two I use but it is important to me that one is supported and works reliably, even if this inevitably means having to implement fixes around problems introduced by the hosting platforms. Please, please do whatever maintenance is necessary to keep at least one of them working.

the reliability of iCloud is entirely in Apple’s hands. As the reliability of Dropbox is in the hands of this company. You could try to use Bonjour for syncing which is supposedly faster and more reliable than iCloud. Or set up local WebDAV, thus making its reliability entirely your responsibility.

Asking someone to change something who simply has no influence whatsover on what you want to changed is futile.

Or around the problems introduced by your electricity provider. Or your internet provider … There’s a ton of things coming into play here which can’t be influenced by a third party. As much as you want them to.

Sorry, but I don’t accept that. All app developers are working with third-party OSs and most use third-party web services and they make things work. Selling products as including key features that are based on third-party services and then shrugging when they break (I am not saying that is what Devon is doing, but it’s how you suggest things should operate) is not reasonable.

Likewise requiring me to take responsibility for the underlying web service.

Bonjour is not remote sync.

@chrillek is unfortunately correct on this matter. And it’s also why we don’t advocate using a remote sync unless it’s really needed (and yes, in some cases it is).

Please, please do whatever maintenance is necessary to keep at least one of them working.

It’s not a matter of maintenance. If you ever read the release notes for DEVONthink you will see something regarding synchronization. We are always improving it and trying to employ different tactics to mitigate issues. However, as pointed out by @chrillek, as well as our documentation, and Sync Types Explained, there are inherent weakenesses in using a remote sync.

The issue is analogically no different than any delivery service. If you order a package from Amazon, they are dependent on the third-party contractors to deliver it on time. Even if Amazon switched vendors to someone promising better deliveries, things like weather, flat tires and mechanical breakdowns, traffic problems (very related to the issue at hand), etc. all can adversely affect when a package is delivered. None of that is Amazon’s fault nor are those things under Amazon’s control. But who gets the blame? Amazon.

Again, this isn’t about shifting blame, passing the buck, or pointing fingers. It’s about accepting the realities when using a remote sync option which is (1) not under our control nor (2) not under your control.

iCloud has been very unreliable in the past five months, including several outages. There has been quite the buzz in the Apple developer community about whether supporting iCloud or CloudKit is actually worth the effort given these problems. (And trust me, we’re not the only ones getting flak.)