File not yet available?

I am getting the “file not yet available, Download” error. The main database is in iCloud. Opening the database on my laptop and getting this error. Clicking on Download does not do anything…Any suggestions. Non of the previous posts addresses this issue on iCloud database. Did I miss a post?

Was this file created on iOS or on the Mac? Is it indexed or imported?

It was created on MacOS. How do I find out about if it is indexed or not? It was imported (I think) in MacOS.

Indexed items have a small icon right behind the name in list/icon/columns view.

This is covered in the built-in Help > Documentation > Appendix > Iconology. 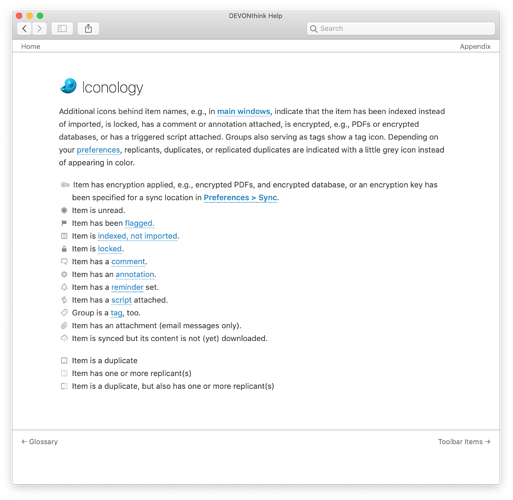 Here is an example record. This is on the laptop. 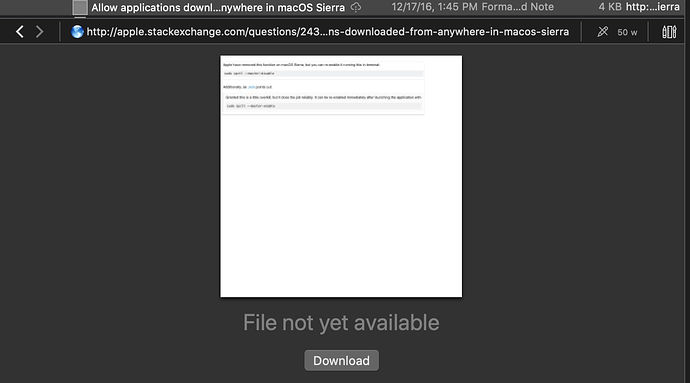 Same File on the desktop

And the file is an indexed one inside the Dropbox folder? In that case the Dropbox.app should transfer the file from one machine to the other, DEVONthink’s own sync transfers only the metadata (to avoid conflicts with the Dropbox.app and e.g. duplication of files)

I know it is supposed to do that but I had some issues where the files were lost after I made a bunch of edits. They were critical files so I decided the best plan going forward is do always import files after I index them and not keep them indexed long-term.

I am not saying everyone should do that. It may well be that I made a mistake somehow and caused this. But what I concluded was that since it is possible that this sort of thing can happen, it was too much risk for me to take in terms of losing data and the better plan was to just use indexing as an easy way to get stuff into DT3 but to then import it into the DT3 database.

Once files are into DT3, it is the most stable database I have ever worked with - my confidence that my data is secure inside DT3 is immense - I don’t have that confidence with content indexed into DT3.

So. How do I fix this. Now I see many records like this.

Is the local Dropbox folder in the same relative location on each Mac? It should be.
The default is ~/Dropbox and we strongly suggest accepting that choice.

Try these two steps and see if the problem persists (make sure you are connected to Internet):

My files I am having issue is not in Dropbox (I do have a shared database on Dropbox) I have not tested to see the same happens there. I am using iCloud sync…I will try the recommendation now.

Tried both steps on both computers. Same issue on the MacBook Pro…What now?

You have not stated yet: Are you indexing files?

Hi Bluefrog. I am sorry. I am not understanding question. I select the folder and select update indexed items on my desktop.

Here is another interesting thing. Sorry I am sure I am doing something wrong here, may be not understanding how DT conceptually works. If I take a record that has an attachment, ie a PDF on the desktop, move it to another database, it shows on the laptop in that second database and if I move it back than it updates on the laptop as well…Hope this explanation makes sense…

Back to your question about indexing files, can you elaborate on that?

If I take a record that has an attachment, ie a PDF on the desktop, move it to another database, it shows on the laptop in that second database and if I move it back than it updates on the laptop as well…Hope this explanation makes sense…

If both databases are syncing with both Macs, then yes, that’s expected behavior.

I select the folder and select update indexed items on my desktop.

This would be used if you are indexing files. You would see the small Finder icon to the right of indexed items names, like this…

In DEVONthink’s Preferences > Sync, select the sync location and press the Info button (encircled i). Is Synchronize content of indexed items checked or unchecked?

Are the indexed files located on an external drive connected to one of the machines?

I don’t think so. I have been a long time Evernote user. When I switched to DT2 (and now3), I imported many to DT3.

I don’t know if this helps. Here is a sample file and how it shows up on each computer:

The file (when I click on info) is located on the main drive in the DT3 file structure.

On the laptop this is what I see: 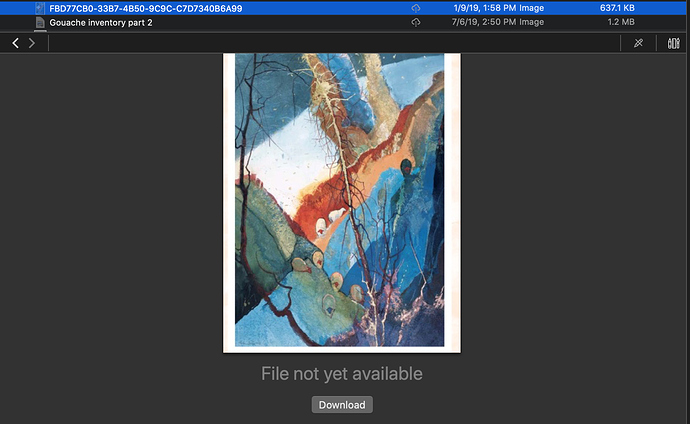 Hope this is what you are asking for…