Finder Comments, or not?

I have been using DevonThink Pro for many many years. Very few problems in all that time!

Now I have noticed something that I wish to ask the informed people here about.

Each document in DevonThink can have Finder Comments added in the inspector pane on the right. I find this very useful and I have assumed it is filling in the Finder Comments in the Mac OS. I have used Show in Finder to reveal the file in the Finder and opened the Get Info window but there is no comment to be seen in that window.

So, this is a mystery for me. Can anyone explain why I’m not seeing the Finder Comment in the Finder’s Get Info window?

4 Likes
How can I make Finder comments added in DT show up in Finder get info box?
Thinking about buying Devonthink
New free software for writing DEVONthink item links into Finder comments
Fitz February 24, 2020, 11:53am #3

Thank you @BLUEFROG. That answers the mystery for me.

I’m developing a file sorting system that starts with tags but also makes use of data stored in Finder Comments. I would like to preserve this information when it goes into DevonThink. If I drag the file into DT it works, but I have found that if I use the DT inbox with the Import folder action (the one set up during install), the Finder Comments for the file do not appear in DT. I looked at the ‘Folder Action Scripts’ and they all seemed to use the same “import” AppleScript command. Would editing the AppleScript in some way preserve the Finder Comments? I really would prefer to use a folder action that makes the file go away after import.

Why don’t you just Command-drag and drop from the Finder to DEVONthink?

Thanks, that works! I didn’t know cmd worked in this capacity while dragging onto apps.

Is there a way to import via script that preserves the Finder Comments? My preference would be to include an “import to DT” step in my filing automation.

Thanks for your help!

Development would have to look into this as it appears the AppleScript import command doesn’t preserve Finder comments.

Looking at the AppleScript library, it seems I could replace the “import” command with “create record with” command, right? assuming the “comments” property is “finder comments”. I see another “comments” field in Document properties.

import and create record with have two different functions. If you’re bringing in a file from the Finder it would be an import.

And comments is the Finder comments.

Development would have to look into this as it appears the AppleScript import command doesn’t preserve Finder comments.

Which version of macOS? How does the script look like? 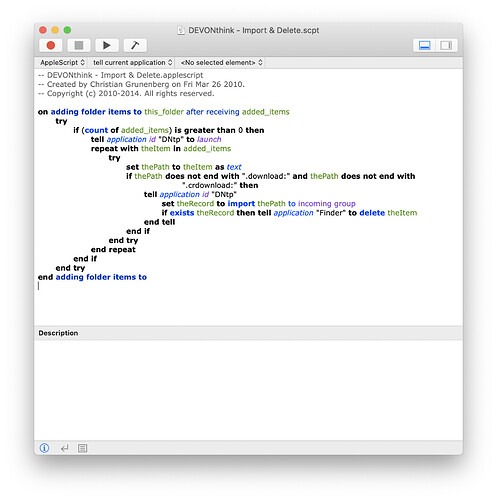 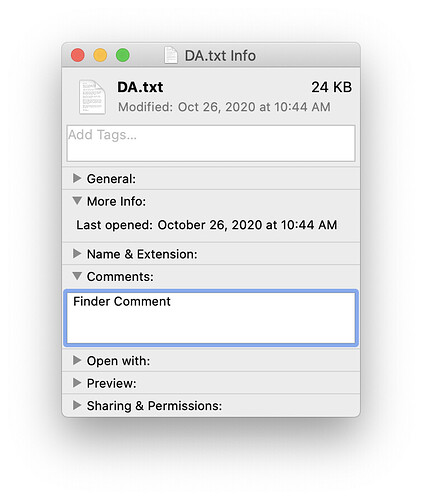 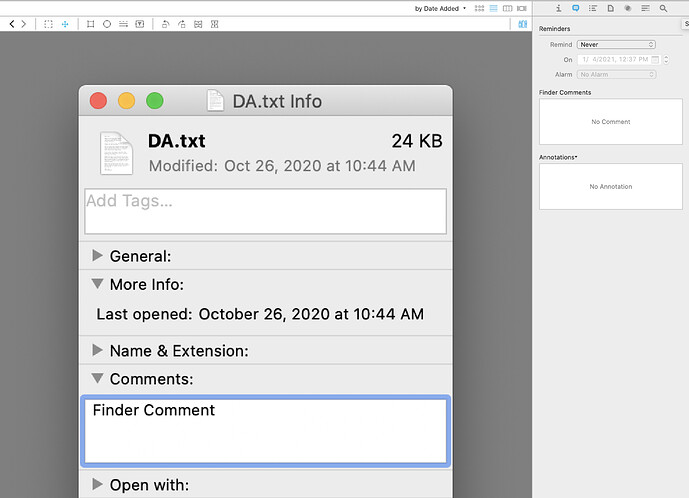 Did you add the comment right before the test? Then it might be a timing issue as the Finder does not immediately update its .DS_Store files. A simple test like this worked as expected:

Yes, it was a recent addition. I have commented another file and will try this again in a bit to recheck it.

Yes, this works if the comment is added and the Finder has time to update the .DS_Store flle.