If you often open files in external programs (for example, to edit Markdown or OmniOutliner documents in other programs), you may sometimes want to figure out the corresponding document in DEVONthink. This may not be easy if you have a lot of documents open in an external editor and the file names aren’t enough to tell you the databases and groups in which they’re filed. 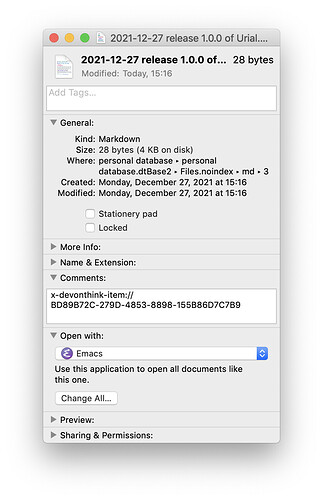 Implementing this turned out to be not quite as easy as I hoped, because of an issue discussed in another thread and mentioned in past postings by DEVONthink’s staff: DEVONthink does not sync the metadata to the file unless it’s an indexed file or you export the document. Thus, it doesn’t work to have a smart rule that simply writes the item link into the comment in DEVONthink; to make it visible outside of DEVONthink, you need to use an external program to write the Finder comment of the file itself.

One thing led to another, and I ended up writing a more general tool that offers not just the ability to write URIs into Finder comments, but does it intelligently, offers different options for handling existing Finder comment text, and offers a way to print the URIs in Finder comments too. The tool is Urial (URI Annotation tooL) and is available from PyPI and GitHub:

It’s free and released under a BSD-type open-source license.

Sadly, setting the comment that way only works for indexed files. If it’s a file in DEVONthink’s database, then as explained by @cgrunenberg in the linked-to discussion, the comment is not written to the file, and thus not visible outside DEVONthink.

If it’s a file in DEVONthink’s database, then … the comment is not written to the file

Acknowledged, and thank you for your application to address this

I’m curious about the repeat-with-children-of-the-note part of your script. What’s the situation this covers? Is it if you drag or import a folder of files?

Is it if you drag or import a folder of files?

Thanks for sharing, @mhucka.

I usually run a little script using Alfred File Actions to do the same. For instance, I have a simple workflow that filters PDF files (or OO files, and so on), then I hit a shortcut (⌘⌥\) and choose Open File in DEVONthink. Alfred will pass on the path to the script, then it opens in DT3.

Here are the file actions, in case someone feels inclined to give this a try.

Thanks for that code and description, @Bernardo_V

Searching in DEVONthink by the full path to get the corresponding DEVONthink document is a great idea. This approach should be adaptable to invoking from Keyboard Maestro, too.

I don’t know how Alfred gets the file name from the front application, but I would guess it uses system events or AppleScript actions, correct? One of the applications I use most does not support events or AS, so it wouldn’t work for that case, but it’s a fringe case and for most applications it ought to work.

The approaches also could be combined. A script could first check if a file’s comments has a x-devonthink-item URI and open it, else try to get the full path of the file and search in DEVONthink using that, else try another fallback method.

What you described sounds like a good combination of the two methods.

In the context I am using the script, it is actually not getting the path from the front application. The Alfred workflow is a file filter; that is, a filter targeted at specific folders and/or specific file types. When I run it, Alfred shows me the files matching the query and, when I choose a file, it already has the path to pass along to the file action.

But that is not to say we can’t get it done using Applescript. @pete31 was kind enough to build a library for this very purpose (see below).

Hi there, here’s a handler that can be used to integrate some apps with DEVONthink. The other script should make it easy to expand this handler with the apps you want to use. (Time to give something back, DEVONthink 3 Beta 2 is great

) The basic idea is quite simpel: If we get the path of a file which is open in an app outside of DEVONthink we can act on this file. Once we got the path we can do whatever we like, e.g. lookup if it is already in an open database or open it in DEVONthin…

Could you share the name of this app you mentioned? Perhaps there is something that could be done.

Searching in DEVONthink by the full path to get the corresponding DEVONthink document is a great idea.

Actually, this is not an idea we advocate as the file path can change.

Actually, this is not an idea we advocate as the file path can change.

I can see the reason for this, but, specifically in this context, I think it shouldn’t be a problem: it is unlikely the path will change in the split second it takes for the script to run. Also, it is merely being used to locate a record with greater precision, but the filename could just as well be used instead.