I create a Smart Rule and a Smart Group in my DT. Then I exported each of them into Finder Inbox: 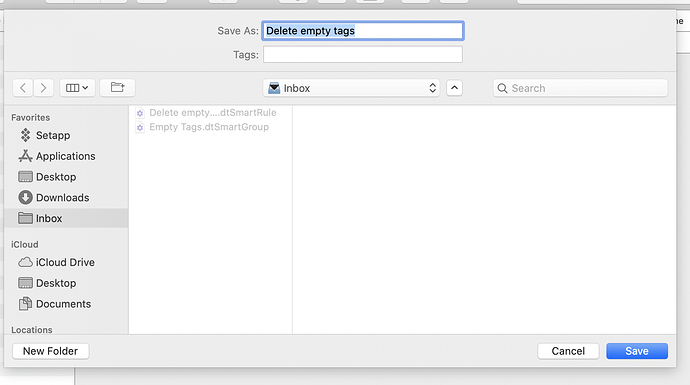 (This capture is showing the yet exported files, I’ve done it only for documentation purposes).

Now both files are in Finder Inbox: 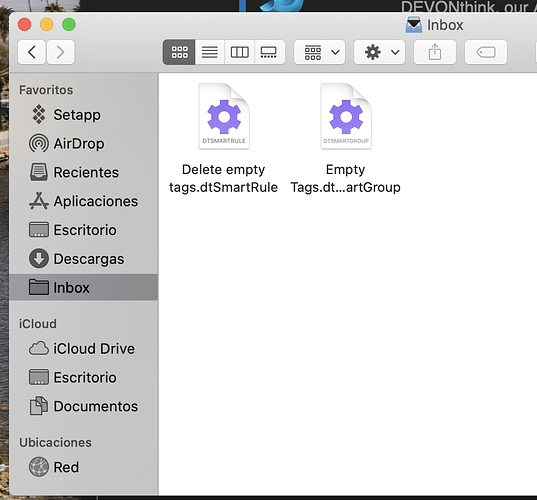 AFAKI, they should have disappeared from that place and gone into DT Global Inbox. But hasn’t: 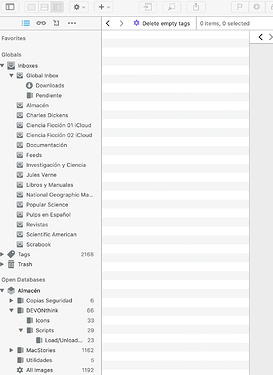 AFAIK this is not desired behavior, or I’m missing something. DT 3.5.2.

Since DT doesn’t store smart rules in a particular database and you can’t create one that is part of the global Inbox, at least that part of the behavio(u)r seems to be consistent.

What are you trying to achieve anyway?

When you drop something into Finder Inbox, it disappears from that Inbox and appears in Global Inbox.

I don’t think that’s universally true; as a test I just dropped a JPEG into the Inbox in the Finder - it was moved into the DT Global Inbox a few seconds later. When I dropped a file called ~$a bla test.docx into the Inbox in the Finder, that file remained put, and was not moved to the DT Global Inbox. That suggests to me the DT has some sort of selection routine (which presumably doesn’t include .dtSmartRule and .dtSmartGroup. There may be an advantage to this behaviour - I actually found the aforementioned file in the Inbox in Finder a while back - it had presumably been left there by Word, and it was never my intention for it to appear in the Global Inbox (or anywhere else). As such, I assume the selective behaviour is intentional.

At the same time, I can’t figure out what you are trying to achieve, so I can’t suggest a workaround.

Seems after restart DT, it moves into Global Inbox.

Pls, @cgrunenberg,take a look to this. Is seems once export and save from DT itself, files remains locked by any reason. Bug? Not really important.

BTW, I tried to save my own rules in a database for future reference/install in other DT instances.

save my own rules in a database for future reference

Maybe this helps (from the user guide):

Edit: I mean that you could export the rules to Finder and then index that folder in DT.

Yes. That’s what I did before. But I saw Finder Inbox (that is the way to drop things into DT from Finder) and thought: exporting into Inbox should export into DT directly as copy.

What I should do is that: export to a folder in Finder (mostly Documents) and then drop into DT final backup folder.

I’m not seeing any issue with the Inbox importing any files, even ones named ~$a bla test.docx.

Once DT is restarted, files move from Finder Inbox into DT Global Inbox.

As said, it seems only happens when you directly export a Smart Rule or Group from DT directly into Finder Inbox from Export Dialog box.

Confirmed.
Development will have to investigate this.

As said, it seems only happens when you directly export a Smart Rule or Group from DT directly into Finder Inbox from Export Dialog box.

Filesystem events used to monitor the inbox folder are only triggered by other applications but not by DEVONthink’s export, on startup the inbox folder is always checked and imported though.

I’ll have to check that during the week; the file I mentioned persisted in my Finder Inbox for days at a minimum though - and was never imported. I actively removed it and later dropped it back in, but it is possible some other factor than the name was responsible for the failure to import (as I said, the file shouldn’t have been there in the first place). I’ll see if I can investigate further, but this could be a red herring.