after using a ScanSnap ix500 for quite some years I just got myself a shiny new ix1600 with the intent to keep out the computer at scantime and directly scan to the cloud and later import into DevonThink. Scanning and moving stuff to the dropbox works just fine. I found out that the right way to auto import into Devonthink from a folder would be folder action scripts. I never used them before but that basically sounds easy. Script is installed and activated. Whenever a new file arrives Devonthink instantly opens but then nothing happens. I used the Import & Delete example script and by looking at it, it doesn’t look like I need to change anything on the script.

Congratulations on the new scanner!

I found out that the right way to auto import into Devonthink from a folder would be folder action scripts.

Actually, that’s old tech (and possibly you may be having an issue with macOS’ Automation options in Systemp Preferences > Security & Privacy).

Instead of using a folder, have you considered indexing that scanning destination folder in Dropbox then using DEVONthink’s smart rules to file the item?

Are you intending to keep the files in the Dropbox folder in the Finder?

I can vouch for the Indexed folder on Dropbox with a smart rule to process.
I frequently use other computers with nothing on them but production software and highly mediated internet connections.(Bespoke VPN, firewalls etc). The ubiquity of Dropbox for file transfer means that I can usually get IT departments to let me into the web interface of Dropbox on those machines. I have two Dropbox folders for two different databases that are indexed in DT and anything put in those folders is imported and tagged as New Import.
When I see my DevonThink installs on my own computers, a smart group of New Import is right there to show me what I added.

Instead of using a folder, have you considered indexing that scanning destination folder in Dropbox then using DEVONthink’s smart rules to file the item?

No, i just didn’t know about that. I basically have used Devonthink as a big scan/archive/search engine without doing a whole lot sorting. The OCR is good enough for me so I do find everything I need later. Guess I need to dig a bit deeper for that. So far I have done this all locally on one machine. I want to keep this more independent from one machine with the new scanner - hence the dropbox way.

Are you intending to keep the files in the Dropbox folder in the Finder?

No, they should just move into the DT database and be deleted from that Dropbox folder. 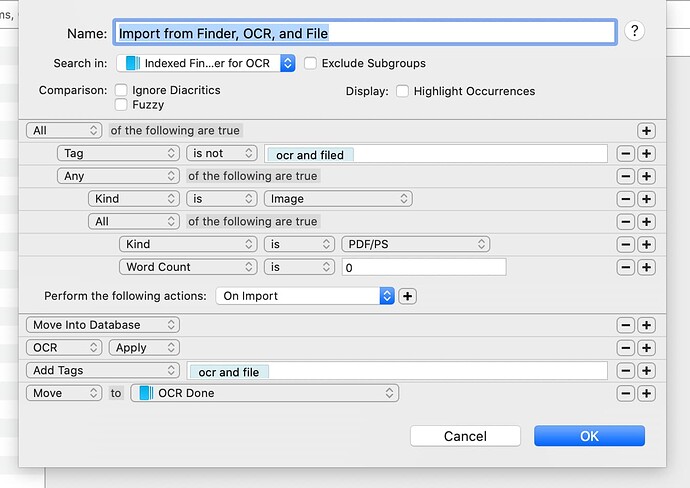 On import, i.e., when you drop a file into the folder and DEVONthink detects it…

Here is the smart rule if you’d like to mess with it…
Import from Finder, OCR, and File.dtSmartRule.zip (1010 Bytes)

@moselblick not sure if this has been answered yet but it seems to have gotten overlooked here. That indexed folder should take care of monitoring a folder on your drive for new documents. You can then target it with automations to import it or do otherwise.

@BLUEFROG I’m using your suggested way for a while now but keep having issues every now and then where my Indexed folder doesn’t update the content from the hard disk. I just removed it and added it back again. It then seems to show and process all the files in there - however, when I do add new files afterwards they don’t seem to get recognized again. Any idea why this happens?

I just added the folder via the file menu. The folder is within my dropbox folder but I made sure it’s set to always download files offline.

Any help is appreciated.

There is nothing amiss here.
Folders synced by cloud services don’t necessarily invoke filesystem events. Also, DEVONthink tries to make sure it doesn’t get in the way of the processes syncing those folders.

Use of File > Update Indexed Items is the method to use in these circumstances.

Unfortunately updating manually doesn’t do anything and weirdly it worked for months already so I’d assume dropbox isn’t the issue here.

The folder shows as a group in Devonthink ad shows a tiny little Finder icon to the right. Is this correct? I added it through File > Index Files and Folders (translated from german UI so it might not be the exact wording).

Is this the correct way to doi it?