Folder partially indexed by mistake - how to get indexed files back into the database?

My database has an indexed group/folder “~Documents” with many sub-folders, plus several non-indexed (imported) folders. I accidentally dragged the previously non-indexed “Books” folder into the indexed “Citations” folder. By the time I stopped the process and undid the “Move” action, about half the files in Books > Location Books had been deconsolidated out into the file system and indexed, as you can see in the screenshots. (The “Other Books” and “Surname Books” folders were indexed, but none of their contents.)

How do I get these files back into the database and “unindex” the Books group and its child groups? I assume I could import the contents of the Location Books folder from my hard drive into the Location Books group in DT, but the Books group itself and its three child groups would still be indexed… so I’m thinking that deleting the extraneous folders from Citations on my hard drive might also delete the groups from DT. Do I need to move all the files in the Books groups into new unindexed folders? I’m just concerned I’ll exacerbate the situation if I don’t take all the steps in the right order. 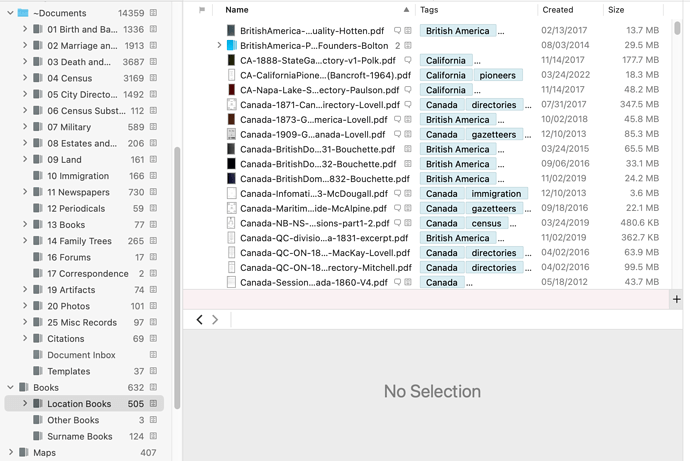 So the Location Books group should be imported not indexed?

If so, Control-click the group in DEVONthink and choose Move Into Database. This will import the files and remove them from the Finder.

What effect will that have on the files already in that group that are not indexed? Only about half of the files got transferred out to my file system, so the Location Books group contains a mix of imported and indexed files.

Files that aren’t indexed are unaffected as they can’t be re-imported.

Thank you! My database is back to normal.

You’re welcome. And be careful with those drags… and drops