Is there a way to make the folder script that imports/OCR/Deletes files from a watched folder import those files to a specific database and/or folder?

Yes, but… if you are wanting it to go to one specific group you could add that fairly easily. If you want it to detect and sort into several folders, depending on some criteria… that could be much more complicated to do. Not impossible, but the data coming into the script would have to be uniformly occurring to have it behave well consistently.

I have two databases that are usually opened. The one I would like the files to go into is called “personal” I don’t really care what folder in that database it goes into, just the inbox would be fine.

Easy enough. This is a simple change but not error-trapped to see if the database is open.

I hope that gives you a start. Cheers!

It’s not included in the Scripts. They are installed in the DEVONthink menu item > Install Add-Ons…

The current “DEVONthink-Import.scpt” is a folder action which imports newly added files in a folder into the global inbox (“tell application id “DNtp” to import thePath to incoming group”).

If I want to modify the script to import newly added files to a specific group in a specific database, can you advise how may I do it?

Thank you very much
George

There is more than one answer to this.

You can refer to a group by its location in a given database. For example…

You can also refer to a group by the alphanumeric string in its reference URL (what you get when you use Copy Item Link). For example…

You would use this variable - here, destinationGroup - instead of incoming group.

Dear Jim
Somehow the script editor won’t let me compile the script and shows “Syntax Error”.
Thanks again for the help. 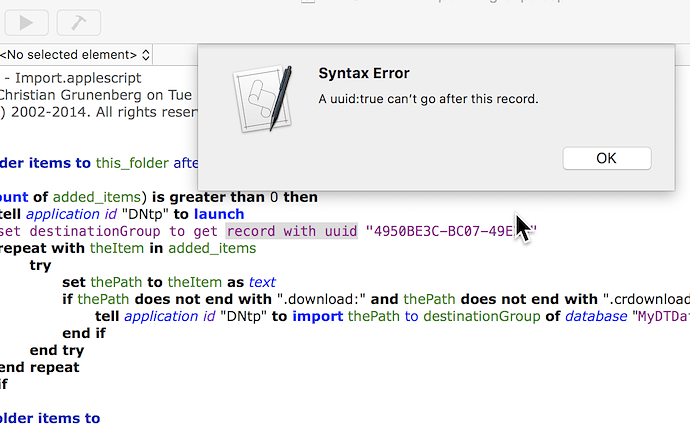 This will not work as the first line essentially tells DEVONthink to do something then stops talking to it. When it gets to the second line, you are not talking to DEVONthink so the system has no idea what a record or uuid is. Those words only make sense to DEVONthink.

You could change it to…

The folder action works now! And indeed I have pasted an incomplete link in the script.

Thanks you very much for your help.
George

I’m afraid this is a luddite question but … I really want to make this change to the mail rule in Apple Mail so that it moves messages to a specific folder rather than just to the inbox, but this stuff above is greek to me … I can’t figure out where I would make the changes to the rule, or how to do that. Can someone post very basic step by step instructions for how to do this?

Change this line near the top of the script…

That should be all that’s necessary but bear in mind the imports will only go to that specific group.