You can somewhat replicate the Mail-to-Evernote experience on your Mac:

So when you are out and about on your iPhone, just forward the message to the contact you had set up like you would to your mail-to-Evernote address. The message will be processed by Mail if and when it is running and you should get your email imported into the DT3 Inbox.

From there you can create smart rules to file the imported mail automatically. Of course, you could vary the “+your-text-here” part in the name and perhaps use a different one for each subject or database (like an EN Notebook) or tag. Or combine it with text that you add before forwarding to aid filing.

Is there a way to do that as a wildcard so that any email address with +DT in it goes to a catchall inbox in DT3?

There’s no need to use “a wildcard” since the Mail Rule has a contains option.

I use MailMate as my email client and it has an Add To DEVONthink command which I use many times a day. I have started experimenting with including it in a mail rule “match this email and add to dt” which seems to work in my limited experiment.

Brihi, you said you drag and drop your emails to DT3. I was wondering how you do that. If I drag an email from Apple mail to the DT3 icon in my dock, all I see in DT3 is the subject of the email, not the email itself. Do you drag and drop a different way? Thanks.
Martin

so excited this worked really well. Thank you for posting.

all I see in DT3 is the subject of the email, not the email itself.

Are you using the Pro edition of DT3?

Hi,
I have the most current version of Devonthink3.

Note that the drag and drop feature has worked on all versions of DevonThink that I have had in the past.

Any chance you can share how you do this specifically?
I’m not too familiar with rules or automation in general and I’m having a hard time with a specific process I’d like to happen, namely, automatically sending every Mailmate email I receiver from one specific sender to my DT global inbox. Any help would be appreciated.

I have attached a picture of the screen where I created the rule for one particular email. I am not an expert on Mailmate rules but under the selector (Subject>Body) there is a long menu of items and I suspect that you could use one of them to get the messages that you want. I didn’t see an “All Messages” but it might be there hiding or you might be able to contrive one. 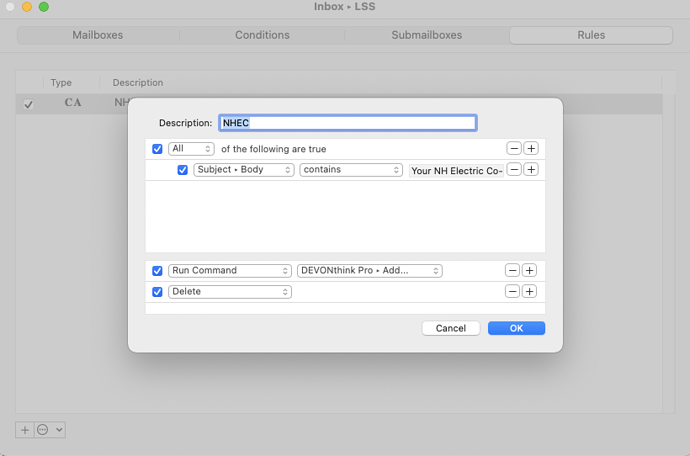 Thanks so much. One more quick question–to the right of “Run Command,” what is the command you’re running? It gets cut off after “Devonthink Pro - Add…”

Actually it is pretty much as you see it. But you don’t have to actually type it, it is under the pull down. It is the only DevonThink command that is built in – Add… (to Inbox). See the attached picture.

Just remembered – you have to enable the bundle in the MailMate preferences: 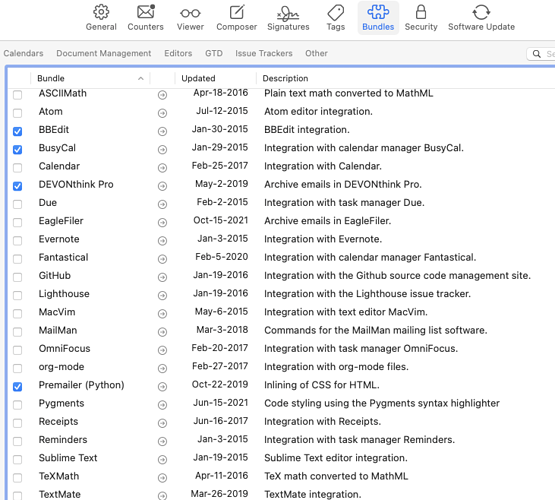 Did you get it working?

Hi, Fillmore, thanks for checking.
I did, but after a lot of fiddling, I set it up slightly different from yours. 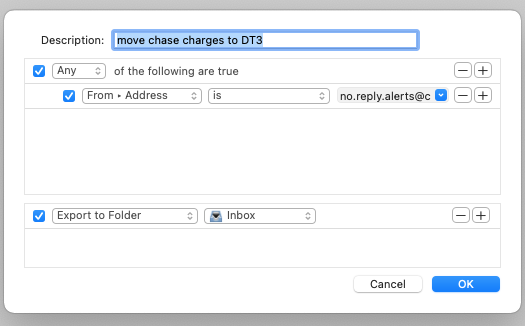 This sends copies of charge alerts from two different credit cards (both with same company, so same sender address) to Devonthink, where I set up rules to have emails in the Inbox containing the last four digits of each credit card forward to their own group (folder). From there I can easily add the charges in my accounting system. Big change for me–going from waiting 3-6 months to reconcile credit cards to (hopefully) updating the registers a couple times a week.
One slight snafu I couldn’t work out is that the emails are showing up in DT named with a random string of numbers. Not a big deal but it’d be nice if they were named with the subject line (as is the case when I use Mailmate’s command to add a random email to DT).
Thanks again for your help, Fillmore.

Big change for me–going from waiting 3-6 months to reconcile credit cards to (hopefully) updating the registers a couple times a week.

Fantastic - and much nicer for your financial sanity, I’m sure!

the emails are showing up in DT named with a random string of numbers. Not a big deal but it’d be nice if they were named with the subject line (as is the case when I use Mailmate’s command to add a random email to DT).

Sure. Here’s how they’re showing up in the DT Inbox.

Interesting… must be a MailMate thing.

It’s actually working out okay. When I see the random six numbers, I know what it is. The fact that they’re sorting themselves out into the correct folder is the big payoff.

Noted - but you could also use the Change Name action somewhere in your filing smart rule, if you wanted to.