I’m trying to create a personal glossary folder/group for technical terms and have run into a problem that probably indicates I just don’t know how to go about it. The glossary group would ideally consist of short notes defining individual terms, and in my ideal scenario, synonyms would show up as separate names in the listing but point to the same underlying note. So for example, if there are terms “foo” and “bar”, the list would be something like

but clicking on either “bar” or “foo” would lead to the same note. The problem is that duplicates don’t work—they produce physical separate notes, so editing one does not lead to changes in the original—and replicates don’t work either because any change made to a replicate, including a name change, is reflected in all its entries.

What would be a good way to create a glossary with synonyms?

I’m confused as to what is your diagram representing? A group of individual files? Lines in a file?

Lines in a file (a lá dictionaries) could link different words to the same file. Here’s a simple example in Markdown with a table of contents to jump to the desired section… 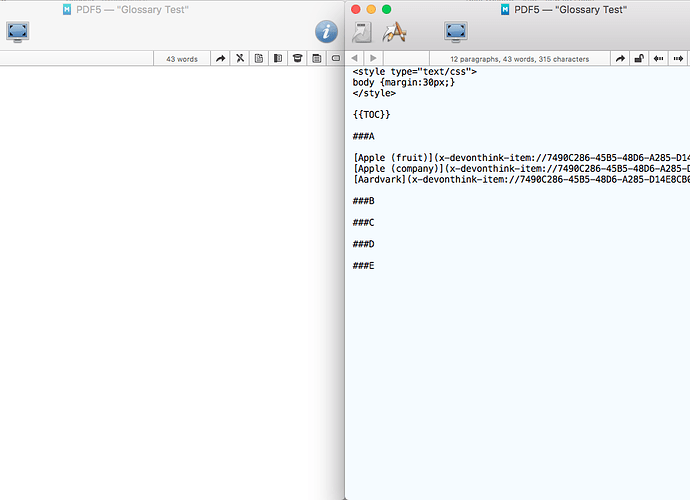 Sorry for the confusion. I was trying to depict lists of documents in a Group without going to the time of creating a screenshot. Oh well. So here is an actual screenshot to show an example of RTF notes in a group that I have. Each line is a separate note. So my question is, is there a way to have multiple entries (meaning, different titles) for the same underlying document? 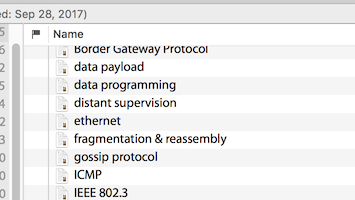 I don’t want to create a single table-of-contents document with links to separate notes/documents. That’ll take 5x as much time and requires continual maintenance. The list of documents in a group, sorted alphabetically, is already a table of contents. All I’m looking for is a way of handling synonyms in a more direct fashion.

I can use duplicates, and will do that if that’s the only way, but because of the existence of DEVONthink “replicates”, I thought there might be a more direct way of achieving this. It seems like we’re so close, so I thought I’m missing something, some built-in functionality of DEVONthink that I’m not aware of yet.

Replicants point to the same document, but as you’ve seen that includes Name as well as content.

An alternative might be to use Aliases. Also to put the item link of the “main” definition into the URL of its synonym(s).