Hey team. I am looking for new ways of working with writing/sketching apps and DT tools.

My main strife is this: every sketching app seems to create notes/files/whatever in its own format and usually stores them in its own (inaccessible) iCloud storage directory. As a result, I can neither index those files with DEVONthink nor view/interact with them on MacOS.

The way I work with these apps now is to occasionally export PDFs and save them to DEVONthink databases—or more often to forget and leave the notes/sketches to rot in the dingy, forgotten corners of these apps and their bad file management implementations.

Does anyone know of a writing/sketching app that stores its notes in a DT-indexable place and has a way of viewing those files on MacOS?

GoodNotes seems like it might have been an option in GoodNotes 4, but they appear to have dropped many syncing options in GoodNotes 5 and I’m hesitant to pay for the app in order to confirm my disappointment.

not sure if this feature is still available…but I remember a somehow backup feature (instead of Sync) that automatically creates a PDF e. g. in your Dropbox account for every note you’re modifying - indexing that Dropbox folder later on using DT may what you’re looking for.

Thanks—is this a GoodNotes feature? If so, I believe they removed the backup option in GoodNotes 5. People are upset about it and it looks like reimplementation is on their agenda.

GoodNotes announced they were suspending the work to date on GoodNotes 5 for macOS in favor of using Catalyst to bring the features of their iOS app to macOS, when Catalina and iOS / iPadOS 13 are released. Perhaps this will make the Mac app more consistent with the iOS app, version 5.

Aye, I heard about this. It could be good news in general, but as far as I know the GoodNotes 5 iOS app doesn’t provide a backup to cloud storage feature right now, either. 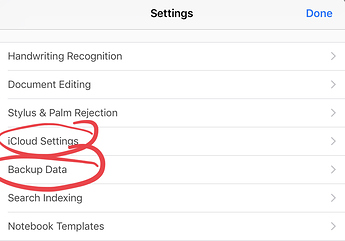 … anyway, Notability on iOS is just as good as GoodNotes, and can be configured to back up to Dropbox in formats indexable by DEVONthink. 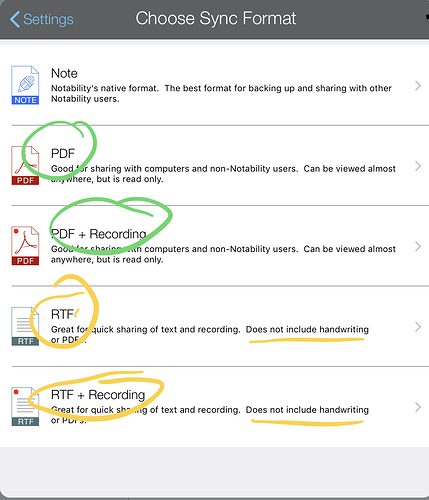 Ah, sorry, I’m referring to this note on their website:

The ability to link cloud storages like GoogleDrive, OneDrive and Dropbox is currently not supported in GoodNotes 5 and will be added back. We’re sorry for the inconvenience. Please keep an eye on the App Store as we’re frequently releasing new updates to GoodNotes 5.

I’m guessing the backup data feature runs it through iCloud? Does this result in a Goodnotes folder in iCloud that’s accessible via Files/Finder? Sorry for all of the questions!

I’m using Notability (has strong features like detecting lines of the paper to snap your drawings to the lines and other drawings) and I’m able to activate a “PDF Backup to Dropbox”. The OCR’d PDFs (!) are sitting then (one PDF per Note including your folders & sub-folders) in a Dropbox folder. Just index it to DT and you’re fine.

Thanks to you and @korm!

Great suggestion! Tremendously enhances value of Notability (Great to begin with!) by allowing g the search for folders rather than only individual notes.

There’s an iPad app called “Nebo” which automatically converts handwriting to text and can sync to the cloud.

Linea has a companion Mac app called Linea link that allows you to use ‘Add to DEVONthink 3’ share functionality. It’s not automatic, but it does appear to save the Linea file in DT and is accessible on iOS via ‘Open in’

Hi @ryanjamurphy , did you ever solve your workflow challenge to get handwritten contents recognised and imported into DT? Getting mine in non-OCR PDF and I would love to import them as (rather) searchable documents into DT!

I had managed to stitch together some thing, but it was quite the Rube-Goldberg machine, and it wasn’t very robust.

Roughly, I used Hazel to pick up on the automatic backups created by GoodNotes, ran a script that opened them in PDFpen, split the pages, saved the last page as a file, and moved it to DEVONthink to get OCR’d.

I don’t use it anymore—unclear as to whether the automation was too fragile or because the journaling habit didn’t stick, hah.

Edit: Let me know if you want the script. I think I still have it somewhere.

How did the OCR engine perform? The one used in DT (Abby) can’t do anything with my handwriting…

I used DEVONthink’s engine too. It was okay. Let’s just say it can never be the OCR engine’s fault with my handwriting…