I tried to modify the daily journal template and I seemed to have missed a step.

I opened the main.scpt template and deleted the bits with the daily quote, changed the local headlines to Google News and a local TV news station. The script compiled successfully.

However, when I run the template, the old daily journal template runs – not the new one. It seems like there’s some kind of pointer in the template package that continues to point to the old script.

What am I missing? I am modifying the main.scpt file – is there another file I need to modify as well?

The Daily Journal template doesn’t point to an external template. It creates a record each time it runs.

It seems like there’s some kind of pointer in the template package that continues to point to the old script.

Did you modify the main.scpt in the template package?

And do you see the same behavior after quitting and relaunching DEVONthink? 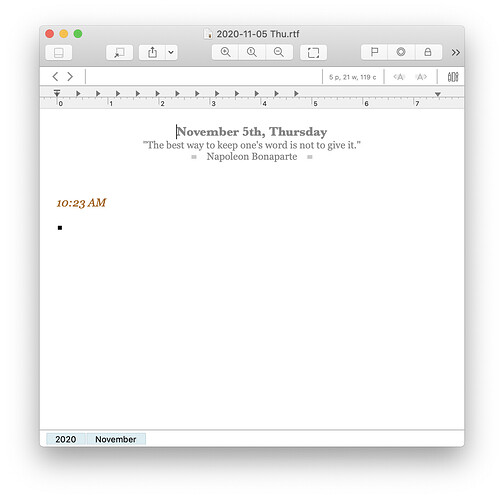 Yes, I did modify main.scpt and quit and restarted DevonThink.

The main part of my (attempted) changes to the script were to get rid of the daily quote and use different RSS feeds for news. However, when I run the template I seem to be getting the same result as if I had not changed the script at all. I see the quote and the NY Times headlines. I also tried to rename everything to “daily note” instead of “journal,” because I like calling it a daily note.

I’m using the markdown version of the script.

Here’s the script as I altered it – what am I doing wrong here?

– Format the day, calculate suffix for English if needed
set theDay to day of theDate as string
set shortDay to theDay – shortDay won’t have a leading zero
if the (length of theDay) < 2 then set theDay to “0” & theDay
set daySuffix to “”
if theLocale is not “de” then
set suffixList to {“st”, “nd”, “rd”}
set theIndex to last character of theDay as integer
if (theIndex > 0) and (theIndex < 4) and the first character of theDay is not “1” then
set daySuffix to item theIndex of suffixList
else
set daySuffix to “th”
end if
end if

– Format the year
set theYear to year of theDate as string

–Get the news headlines
on getNews()
set myNews to {}
tell application id “DNtp”
try
if my theLocale is “de” then
set getNewsSource to download markup from “feed://www.tagesschau.de/xml/rss2”
else
set getNewsSource to download markup from “https://news.google.com/news/rss/?gl=US&ned=us&hl=en”
end if
set getNewsFeed to items 1 thru numHeadlines of (get items of feed getNewsSource)
repeat with theItems in getNewsFeed
set end of myNews to title of theItems
set end of myNews to link of theItems
end repeat
end try
return myNews
end tell
end getNews

–Get the news headlines
on getNewsLocal()
set myNewsLocal to {}
tell application id “DNtp”
try
if my theLocale is “de” then
set getNewsSource to download markup from “feed://www.tagesschau.de/xml/rss2”
else
set getNewsSource to download markup from “http://fox5sandiego.com/feed/”
end if
set getNewsFeed to items 1 thru numHeadlines of (get items of feed getNewsSource)
repeat with theItems in getNewsFeed
set end of myNews to title of theItems
set end of myNews to link of theItems
end repeat
end try
return myNews
end tell
end getNewsLocal

Hi @Mitch_Wagner, did you ever find a resolution. I’m running into the same issue and hope to find the answer.

Did you try the modified template I posted?

Thanks. I did. The issue is that changes to the main.scpt file are not recognized when I run the template in app. I don’t know if I need to recompile a template (if that’s even the right word). Perhaps of note: in finder main.scpt indicates today as the last modified day, but for the .dttemplate package it indicates December 5, 2019.

My temporary fix is to make a Keyboard Maestro macro so that when I hit CMD-CNTRL-OPT-SHFT-J I run the script to create the new file. This is working great for now and may actually be my preferred method in the future. Just trying to figure out the template thing.

Did you quit and relaunch DEVONthink after making changes?

You can just delete them from the ~/Library/Application Support/DEVONthink 3/Templates.noindex folder.

Well, I feel like a dummy. I did quit and relaunch DEVONthink after making changes. BUT–and this is the dummy part–I was making changes to the main.scpt file in the DEVONthink.app package! and not in the application support folder. Woah. Talk about a bad idea.

So, for any other person looking to amend the templates, I suggest you not make the same mistake I did (thought there were no lasting ramifications.) That is edit the templates in ~/Library/Application Support/DEVONthink 3/ and not in the application package.

Thanks again @BLUEFROG for your incredibly quick help!

I’ve been using the Daily Journal template–which is excellent–but it saves to my inbox. Is there a way to move the “Journal” group to one of my databases?
Thanks.

Is there a way to move the “Journal” group to one of my databases?

Only by customizing the template as it needs to know the location of the journal.

The Journal group and its files should be created in the current database.

Ahh, that’s why I had Journal folders in multiple places. Thank you!

I never was able to solve this problem. I’m now trying again.

I want to eliminate the quote, weather and news headlines. I just want an empty file with timestamps as # headers.

Here’s what I tried:

I copied the original template.

I modified main.scpt to remove everything I could find in it that seemed to refer to a quote and headlines. Here is the result:

After making the modifications, I closed and restarted DevonThink, and then run the modified, duplicate template.

A markdown file that just shows a # header with timestamp–no quote, no headline.

Here’s what I get:

A markdown file that starts with a quote and five headlines from the NY Times.

In other words, even after I modify the script it still seems to run the original script, as if I had made no modifications at all.

How do I fix this?

Bluefrog, I did not run your script modification because it produces an RFT file, not an RTD, and has a quote at the top, which I do not want.

And now I’ve made progress! The script does absolutely nothing! It does not create groups or documents! So, progress I guess? Yay?

It does nothing because there are errors in the code you posted.