Each time I launch DT Office empty “New Group” folders are generated in my inbox. Any thoughts? Also, each time I launch the program I get the Leopard warning that DT has just been downloaded from the internet, and asking me to confirm that I want to run the program. The warning doesn’t expire after the first launch like with other apps…

That seemed to work – no more folders automatically appearing. Thanks!

Anyone have thoughts on the second issue?

I’m having the same problem. Every time I put something in the Global Inbox, a new ghost (?) folder called “English Bible” appears (I guess because at some point I created that folder when I first started playing with DT).

Anyone have thoughts on the second issue?

For some reason the file quarantine isn’t being cleared, possibly because of what the last paragraph of the article says:

If you can’t find some other way to remove the quarantine warning I’d try downloading, reinstalling, and first launching the app all under the same account.

aha… that makes sense – the multiple accounts. Thanks again to all.

I’ve attached a picture of my magical multiplying folders. 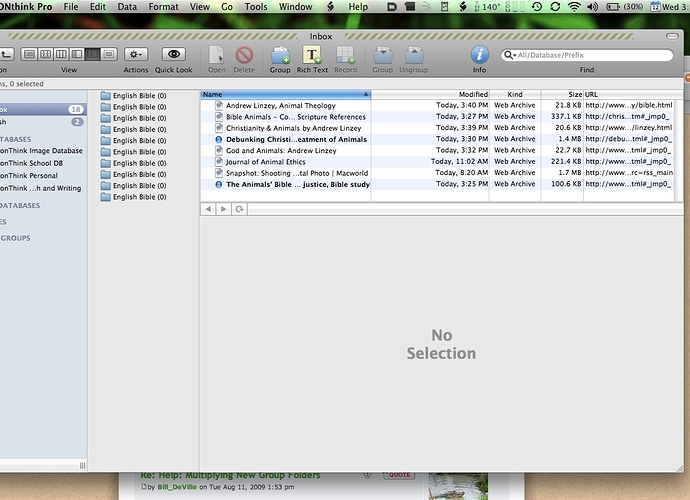 As you can see, for every item in the inbox there is an empty folder titled English Bible.

Any assistance would be appreciated.

As you can see, for every item in the inbox there is an empty folder titled English Bible.

Have you repeatedly added a folder named English Bible to the global Inbox?

When importing folders to the global Inbox there’s a possibility of duplicates groups for them appearing in DT. I’m still vague on the details since I discovered that for the first time yesterday when testing something discussed in Copying directly to Global Inbox in the Finder – is it safe.

I have the same problem that every time I start DTPO, I get a new “InBox (0)” folder appearing in my group InBox. If I quit and restart DTPO, another InBox (0) folder appears.

I’ve tried the fixes presented in this forum, but did not fix the problem.

in the Sorter, the only folders that I have are the “Global InBox” (default you cannot edit) and one folder, “Income 2009”, from my database. Even after deleting this folder from Sorter leaving only the default Global Inbox folder, the problem remains.

Any suggests are greatly appreciated. Thanks.