I had a very disturbing experience last night. I was getting the errors shown in the attachments below.

I had one item that would cause DTO to crash every time I tried to open it up. I had to force quit DTO every time I clicked this file. Since I did not feel it was that important, I went into my db via “show Package contents” and eventually deleted the bad file". I could not right click to “show in finder” since it would crash DTO. Upon running DTO, I got the errors seen in the attachments.

After I deleted the file per above, I found the bad file in a folder labeled “orphans”, There were also two other items in the “orphans” file which I did not manually touch.

I figured I probably should not have used the technique I tried to delete the bad file.

Verify and repair seems to give NO errors now. And the db opens and works fine.

If this happens again, how and what do you do? Does I still need to run “rebuild database”? I have not done so. 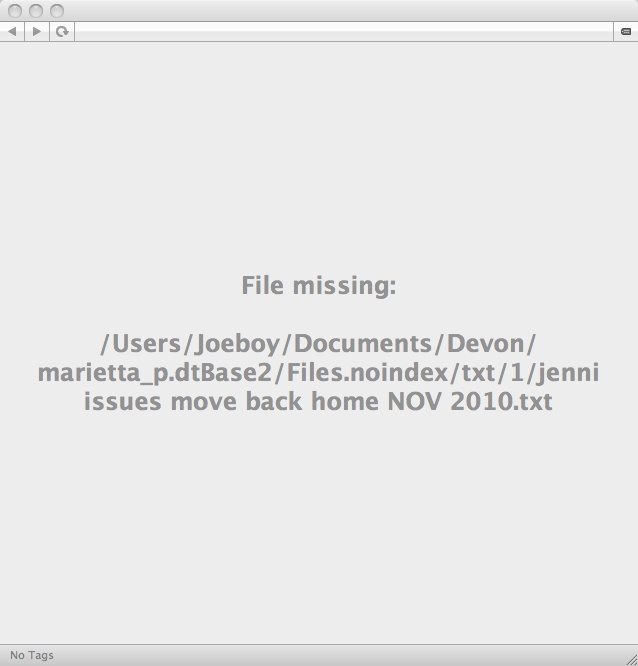 If you encounter a file that causes a crash each time it is selected, e.g., in the Three Panes view, it’s likely that the crash results when DEVONthink attempts to display the document and is unable to do so, probably because the file is damaged.

So, how can you select a document for deletion, if selecting it results in a crash?

Solution: Swich to another view, such as the List view, that doesn’t display the selected document, then move it to the Trash. And remember to empty the DT Trash to the System Trash, so that you don’t inadvertently display that bad file when inspecting the DT Trash.

Bill
Thank so so much. I never would have thought of that .