I can’t find a way to highlight selected text on iOS, just on macOS? The highlights done on macOS are present and clearly visible on iOS, but I would like the ability to add highlights while on the go.

Yes, if you purchase the Pro Pack in DEVONthink To Go 2, you have the PDF annotation tools available.

if you purchase the Pro Pack in DEVONthink To Go 2

But can you highlight non-PDF files as well? For instance text/markdown-files? I don’t see any options for highlighting when I select text, like on the image below? 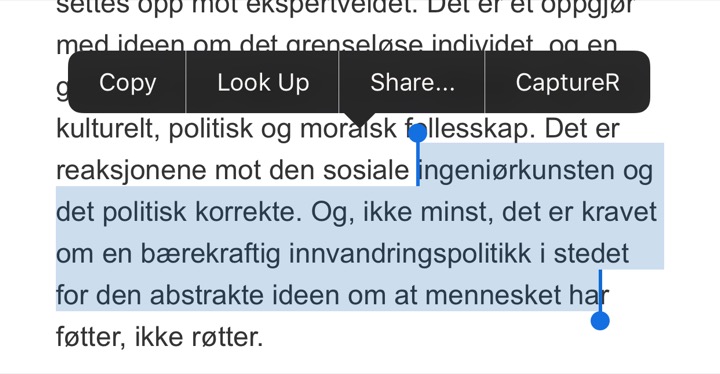 No. Markdown is a plain text format with just a rendered HTML view for display. Plain text doesn’t support formatting.

Of course Markdown and vanilla text files can’t be annotated. But what about RTFs, HTMLs and Formatted Notes. They all support highlighting on the desktop version, but not on To Go. That would be a welcome addition, given that we mostly use our iPads for reading and annotation these days.

I have purchased the pro pack and was quite put off because of that.

iOS ≠ macOS so the underlying technologies aren’t the same (and in some cases, not available. RTFs are not mobile-friendly, for example).
We are looking at text editing options for future releases. Your opinion is noted.

I add a + 1 here. I come in the forum to ask exactly the same question.
It is possible to use html tags on markdown to highlight text, but it require entering in edit mode etc. It would be nice to have just a button or something similar for highlighting!

I gather from this thread and my own testing that DTTG doesn’t have the ability to edit RTFD, and only a limited ability to annotate RTF files (you can apply bold, italic etc, but not highlights). Effectively, annotating RTFs on the iPad is not really a viable option, in the way that it is for PDF.

Unfortunately, that’s quite a big obstacle for me to use DTTG fully as over the past few years I’ve accumulated a lot (thousands) of RTF(D) files as webpage clippings from Safari – using reader view, cmd-A, cmd-) to clip the basic text, pictures and links is very much ingrained behaviour now…

Sadly, you can’t convert RTFs to PDF in DTPO. In future I’ll clip to PDF, but as I don’t really want to have to download thousands of webpages again, I wondered if anybody has a usable workflow for annotating RTFs from DTTG?

BTW, I’ve tried round-tripping with iOS Scrivener, which can highlight RTFs, of course… Unfortunately, when the documents are reimported back into DTTG, or clipped afresh, the Scrivener highlighting is lost. Has anybody got any other things I can try please?

Exactly – I’m in complete agreement with ‘mszargar’. I’ve raised the question here before. DTG (iOS) should have the same formatting capabilities of DTP for Mac OS – if it can display highlights correct for notes created under Mac OS, why can’t it create highlights as well?

This is taking much too long IMHO.

if it can display highlights correct for notes created under Mac OS, why can’t it create highlights as well?

iOS and macOS are not the same operating system. Mac apps don’t just run on iOS. They have to be developed for iOS (or written from scratch with features that are supported on both platforms).

And I restate: it’s taking too long to get the same cross-platform formatting abilities. You do do have competitors who have already done this with smaller teams. With iOS 11, some of us will be relying mainly on iOS and this is a major drawback

You do do have competitors who have already done this with smaller teams.

That is HIGHLY unlikely.

Development moves at the pace required for good, stable code and also has to balance existing issues and the potential of new technology. It is not a trivial thing.

Development moves at the pace required for good, stable code and also has to balance existing issues and the potential of new technology. It is not a trivial thing.

Didn’t say it was trivial. I was expressing my dissatisfaction with the rate of progress of DTP/DTG. You were already very much behind the competition in terms of sync, and your current implementation is limited to Dropbox (and far from being seamlessly automatic).

As a cross-platform writing tool on Mac OS and iOS, DTG is very much behind the competition from small developers: I’m thinking of Ulysses (also from Germany) and Bear (from Italy). I know that DTG is also a document manager, but it can’t be limited to that.

I would also like to add that I stay very much up to date on the latest software and reviews for both Mac OS and iOS (wirecutter.com, thesweetsetup, Engadget, Apple Developer awards, etc), and DTP/DTG seem to have mostly dropped off the radar.

your current implementation is limited to Dropbox (and far from being seamlessly automatic).

That is quite untrue. Dropbox, CloudMe, Box, WebDAV, and Bonjour are all supported.

Development progresses at the rate it progresses. It is not reliant on anyone’s “satisfaction” (or dissatisfaction). There are literally thousands of things we’ve worked out and fixed. There are also literally hundreds of requests and things we have to consider. While you may be unhappy with things, that’s the reality of development and the situation as it stands.

I can also assure you, regardless of where we are “on the radar” (and not even looking at Sales numbers), we have more new Users and our User base continues to grow, on Mac and mobile.

Please let me chime in here. Jim’s statements are correct: There’s no native RTF support on iOS and every developer who wants to support it has to reinvent the wheel. Other companies have been more successful in respect to RTF but these apps usually don’t also do many other file formats. We have to take care of document formats from plain text over PDFs to images and media files.

I agree to your points regarding text editing and better text editing is already very high on our to-do list. But when, like this summer, Apple decides to introduce important new features in iOS that we have to support, priorities change at least temporarily.

Any updates on being able to use the highlight feature for RTFs on iOS?

I noticed selecting text to get the context menu and applying bold or italic and others is slow and clunky as well.

The ability to go through my RTF notes and highlight on the phone would be amazing.