Is there a way to set keyboard shortcuts for common font colors?

Here’s the use case. I use Black and Blue to distinguish between two kinds of text in a DevonThink card: (1) direct quotes from an original source, and (2) my own comments on the quotes. I’m constantly going back and forth between the two colors and it’s enough mouse work to genuinely be a drag on workflow.

I’ve tried a few things without success. Styles doesn’t seem to have a “set color” option, unfortunately. And while this Bluefrog post suggests a way to set hotkeys for highlighting, that won’t work here. I use highlighting to draw my eye to REALLY important things; it’d be visual overkill here, destroying the current usefulness of highlighting and overloading my slow brain with visual stimuli : )

No there are no hotkeys assocated with the color picker. In fact, that’s a stock macOS control, not something of our own creation.

However, unless you’re using a ton of different fonts, why not just define your own rich text style?

But… the hotkey isn’t working, even when I (a) open the dropdown menu and use the two styles to “prime” the hotkey, and (b) quit and reopen. Instead my first hotkey (shift-command-1) produces nothing but an error sound; and my second hotkey (shift-command-2) creates a new Inbox document with the highlighted text [??]. Thoughts??

Here’s a picture of the Apple Settings keyboard shortcut:

Here’s a picture of the DevonThink custom “Styles…” dropdown from within the dialog box. It shows my two new custom styles per your suggestion, varying only in color: “Black font” and “Blue font”:

Then I select text, with this screen shot for an example…

Shift-Command is a very common set of modifiers.
Try Control-Shift instead.

Argh. I replaced the above shortkeys with “Control-Shift” plus 1 and 2, respectively

I then confirmed they showed up in the relevant DevonThink “styles” submenu, and ran each one as a selection through the mouse-click submenu 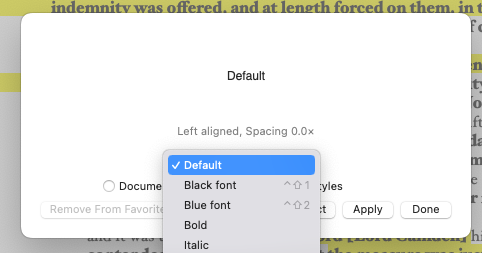 I then quit DT and restarted

I then tried each combo (control-shift-1 and control-shift-2) and just got the error / no action beep for both of them.

I’m sorry such a straightforward thing is turning out to be so complicated : (

And your text selection is in a rich text file?

the formatting bar has to be visible to use a shortcut (Format > Show Formatting Bar).

thank you so much, this worked!!!