How do I add a script to the toolbar?

Found how easy it is to mark one message in DTPO and via the script “Reminders-add as event to calendar” and in a second I have added it to my Calendar to sync with my devices.

Question: Is it possible to make this script to a button in the Toolbar?

Looked under “Customize Toolbar” but not sure how/if I can do it.

Great also with possibility to add a message to Reminders etc.

Think Devonthink is the app/system that have helped me most since I decided to go with Mac 1988 (SE/30)!

Scripts located in ~/Library/Application Support/DEVONthink Pro 2/Scripts/Toolbar can be added to the Toolbar of any window (e.g., the main window, the PDF annotation window, etc.) by opening View > Customize Toolbar, scrolling to the bottom of the list of icons, where you wlll find the Toolbar scripts, and dragging the script to the Toolbar and clicking “Done”. I always give script files a custom icon using Finder’s “Get Info” panel so the scripts have a distinct icon identity when they are installed in DEVONthink’s toolbar.

But - is it possible to assign a button to just one script - in this case “add as event to calendar”?

If not no big deal, script itself saves a lot of time/work!

I’m confused. The method outlined for adding a script to the toolbar is one-script-at-a-time.

Maybe I miss a setting in preferences or elsewhere.

This is the bottom of my symbols in Customize Toolbar: 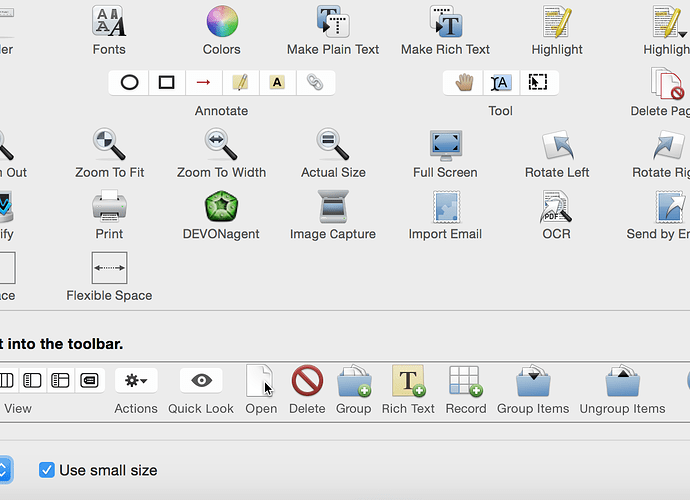 You may need to quit and relaunch DEVONthink so that it refreshes the Toolbar scripts menu.

Also, as a suggestion you may want to reduce the size of your screen captures before uploading (800 pixels wide is a good size) as the large images make the entire thread almost impossible to read on an iPhone or iPad.

I did quit, and restarted my computer, did a permission repair.

No difference. Maybe smart to start a support ticket?

Great help with the size of screen shots - thanks!

Did you save the script(s) to the folder:

For this example I have one script in my ~/Library/Application Support/DEVONthink Pro 2/Scripts/Toolbar folder.

Upline in the thread you wrote

… were you able to drag a script to the toolbar … or not?

I was able to make a smaller screen shot for this forum - thats “works perfect” but I can not see any scripts below the icons.

I have been able to move the icon for ALL scripts but that does not help me.

Perhaps post a screen shot of the contents of your ~/Library/Application Support/DEVONthink Pro 2/Scripts/Toolbar folder?

Here comes the script folder. All scripts works fine. My problem is that i can not add the ONE script to my toolbar but only a button with ALL scripts. 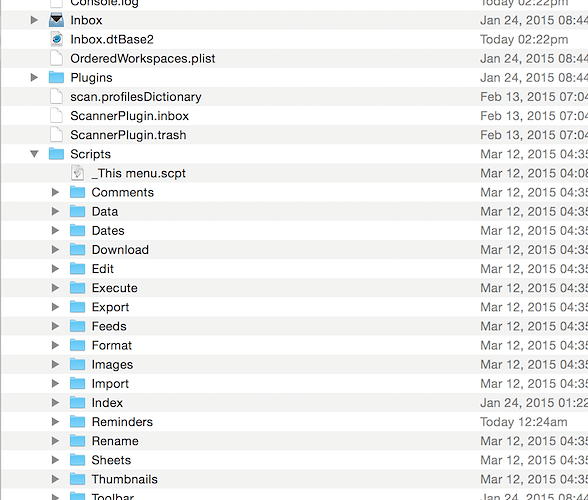 Thanks, but Greg was asking you to show us the contents of the Scripts/Toolbar folder. The script you want to add to the toolbar has to be stored inside that Toolbar subfolder. That’s why it’s called “Toolbar” Excuse me for my minescule brain - I am Swedish after all but very enthusiastic with my new Devonthink!

Here it is - empty. But that tells me that i might be able to drag over the script to the toolbar folder maybe? 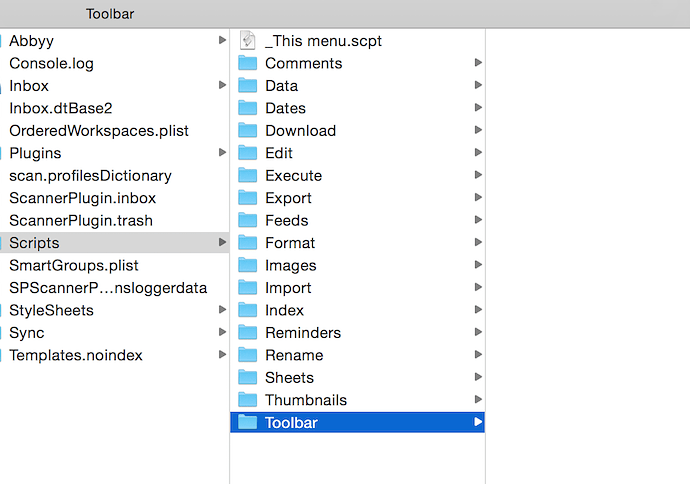 Here it is - empty. But that tells me that i might be able to drag over the script to the toolbar folder maybe?

Yes. The script(s) that you want to be able to add to the toolbar in DEVONthink must be placed in the Toolbar folder.

Simple - now i know how to do!

Never mind. We posted in parallel…

Yes, you need to copy/move the particular script that you want in the toolbar into that toolbar folder inside the script folder. And from what I can tell, it does not work to create an alias there. Also good to give the script a relatively short name to not fill up your whole toolbar. So:

Smart!! To duplicate and not move.

Then it still stays in the menu list AND in the Toolbar!

And I was even able to rename them to a shorter name to save space in the Toolbar.

Nobel Prize to DevonThink (and you all who are so helpful).