How do I stop an indexed PDF disappearing from all my databases when its moved on one?

I am new to Devonthink, it seems to have a lot of the functions I need. But I am now struggling a little. I have a number of databases, I want to index files, mostly PDFs, into the databases. I have one master folder where I keep a lot of PDF papers (DB1), I’ve then duplicated some PDF’s into another databases, lets call that DB2. I can see the PDF in both databases and it all looks good, edits made in one show up in both and the indexed file is in the right location.

But, if I move the PDF’s location from within DevonThink in DB1, as I further organise and add to my other referencing software and file etc, it now shows up as ‘file missing’ in DB2.

Why can’t I move items in DB1 and DevonThink automatically updates the location in DB2?

Anything I can do? If DevonThink can’t do this I might as well just make copies of the PDF’s in folders.

Why can’t I move items in DB1 and DevonThink automatically updates the location in DB2?

That’s not supported currently and would require that all databases indexing the same file are opened. Just curious but why do you index files multiple times?

Hi, Thank you for the response. I only index once, to bring into my main DB1 where I keep my papers. But then I then duplicate the PDF into the database where I am trying to organise the PDF papers I working on for a particular project DB2. Within DB2 I have a number of groups, one paper might be duplicated into a number of groups in DB2.

Problem is if I move the PDF in DB1 for any reason it shows as file missing in all the groups in DB2.

I am new to DevonThink, maybe I am going about it all wrong.

Is a second database definitely necessary? E.g. you could also use a dedicated group for the current project. In addition, then you don’t have to duplicate the files, you could replicate them instead.

I think I need the second DB, as DB1 is large, over 23gb of PDF’s that I do not want to sync with my iPhone. Thanks

If you are creating a small syncing database for mobile - and yes, I think that’s a very good idea - don’t duplicate the indexed file(s) to the second database.

Just index the same files into the second database. Simple.

Doesn’t solve the problem. I still have the issue that if I make changes to this PDF in DB1, e.g. change the file name, the indexed file in DB2 cannot be found and I still get the same ‘file missing’ message.

Also I have to go through the longer process of showing the PDF in finder and indexing it into DB2.

Doesn’t solve the problem. I still have the issue that if I make changes to this PDF in DB1, e.g. change the file name, the indexed file in DB2 cannot be found and I still get the same ‘file missing’ message.

If you reindex the same file into two databases, they will receive the changes independently.

I have just done this very thing again and it operates as I described. Even when one database is closed, it reflects the change when opened.

Also I have to go through the longer process of showing the PDF in finder and indexing it into DB2.

If you’re using Show in Finder, the file is quickly visible to be indexed into the second database.

One potential issue, @cgrunenberg and I just discussed: If you used Data > Move into Database with an indexed file in one of the databases, it would cause an issue on the other database, as the file would no longer be at the original path in the filesystem.

I can’t replicate from DB1 into DB2. I can only duplicate it, this goes back to my original post problem with it disapearing.

As for the show in finder, I don’t want to show in finder really, I am happy to read and highlight the PDF’s in the devonthink window. But I am having yo go through the extra step of showing in finder so I can index into the working DB, DB2

I am really struggling with Devonthink

Just index the same files into the second database.

Indexing the same file into both databases is the only option that will produce the result you are trying to achieve.

Indexing works fine into both databases, but once I rename in DB1 the PDF in DB2 shows as missing. 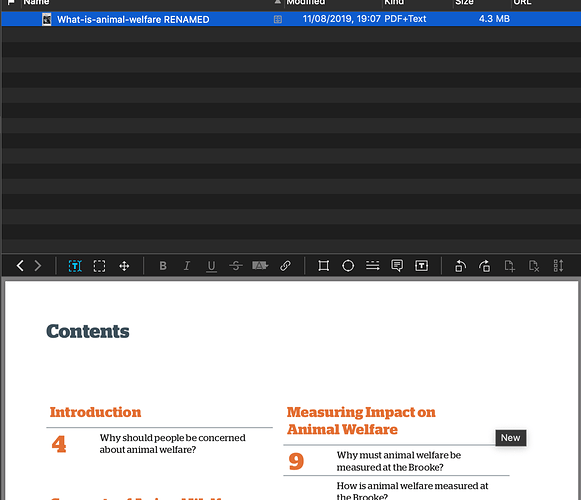 We are discussing some of the behaviors here. Thanks for your patience and understanding.

Thank you, I hope you can resolve it. If you can it will make Devonthink so useful.