How to advise family about using DT after my demise

I am old enough to be concerned about how my family will access important data when I am gone. I’m sure they all know how to use Finder, Windows Explorer and Dropbox. But none of them have even heard of DEVONthink, let alone how to use it. I have created an emergency document which at least tells them everything is in DEVONthink so they can research it, and there are good guides around. But wondered if DEVONtech have ever given it any thought or produced a crash course document for relatives of deceased DT users!

It is probably my main concern about using DEVONthink, instead of a conventional file system.

DEVONthink can be run by anyone who can use the Finder (and no, that’s not hyperbole).

Is your database organized in a way that would be clear and intuitive to them?

I know that using DT in a basic way is not difficult, but I think it is easy to overestimate the computer capabilities of the average person who has never heard of DEVONthink or databases and who does not come to forums.

From your reply I guess there isn’t anything except the Manual and Take Control book, which are excellent but sizeable, although they have basic sections.

One problem that would cause an immediate problem to a novice technophobe would be what to to do on the infrequent occasions where after a restart the databases are not loaded, so have to be launched from File > Open Recent.

Im new to DEVONthink and it took me about 10-15 minutes to figure out how to open a database I had closed. file ➞ open database. and to also learn how to rename groups was hard too. I don’t know why they made it so hard and with no keyboard shortcut. but it would be nice to put that in your instructions Just in case they don’t know how many databases you made.

Im new to DEVONthink and it took me about 10-15 minutes to figure out how to open a database I had closed. file ➞ open database.

File > Recent Databases or double-clicking on the database in the Finder or dragging & dropping the database from the Finder to DEVONthink’s Finder/Dock icon are other possibilities. Basically just the way you would open any document.

and to also learn how to rename groups was hard too. I don’t know why they made it so hard and with no keyboard shortcut.

In the main view pressing Return/Enter is sufficient, in the sidebar you might have to enable keyboard navigation (as sidebars usually don’t support this by default, see Finder or Mail).

yeap! I figured it out. I wanted to give him my input on someone new coming in.

A person who is used to finder would love a right-click option to rename anything. don’t know why it doesnt have it

. Enter for me was for accessing the inside of a folder in finder.

regarding opening databases, I found it easier to use alfred to open them for me. but thank you for trying to give me alternative methods

There are very easy answers to all such problems, easy that it is for any one computer literate enough to have discovered and bought DT.

The vast majority will not find these things obvious or intuitive.

I’ve thought about this too. While the entire family use Mac’s, none use DEVONthink and I’m pretty sure they will curse me if they are expected to do so. So I make it not required for them.

I’ve put the important stuff for my family to have access to in files (with good file names) in a set of structured folders (just a few) on the computer. Most all are PDF’s (unencrypted). In the iMac’s OSX file system protected by login password. I’ve given each member of the family their own login and their login has full permissions to the folders holding the files. They know how to use Mac’s and Finder.

I have a a DEVONthink database called “Family Stuff” which has an index import for the above folders. So from my perspective the stuff is “in DEVONthink”, but DEVONthink not at all required to gain access. Sure, they could if they wanted to, but there is no excuse for them to pretend that using DEVONthink is a reason they can’t get this stuff.

You can easily index the files, thus leaving them anywhere you need them to be in Finder, and managed them via DT.

Thanks for the suggestions All.

I keep all my databases in Favourites (but don’t keep them all open). That way they’re in the sidebar of the app without having to look in menus or the Finder.

Depending on how your records are set up, you could potentially set up a single window and create a workspace to open just that window. Then you’d just need to leave instructions to choose Go > Personal Records (or whatever you name it). 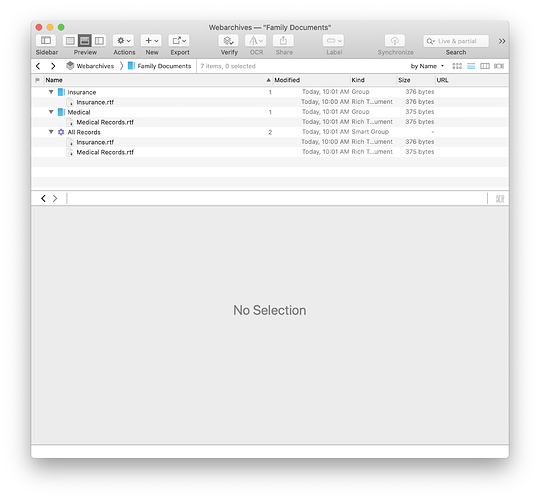 You could keep backups as web exports. Then they could browse your data with any web browser.

After you’re gone, how much of your database will they actually need or care about? I’ve lost both parents, and both in-laws, and I can tell you from experience that the family only cared about a tiny percentage of all the “important info” they had saved in boxes and boxes of files. And the documents that we truly needed, was an even smaller slice.

What I’m getting at is, don’t worry about it. Create a single Finder folder of critical, necessary info (and index it externally, if you must, as suggested above). For the rest of it, anyone motivated to care about what else you have squirreled away will be motivated to figure out DevonThink, and will have the rest of their lives to figure it out.

I have been noodling about similar things over the years. I’m 59 years old; old enough to start taking mortality seriously.

Although really, any person of any age should be thinking that kind of thing.

Also, since no one has mentioned it, this could be a good case for using an encrypted database.

Not that anyone cares about my small potatoes finances, but I’ve used an encrypted disk image for my financial database for 8+ years now.

With DEVONthink 3, creating an encrypted database without needing to create a disk image on your own is now possible.

As an estate planning attorney, I have recommended that certain clients who have more than the usual assortment of digital assets - those who run websites or web-based storefronts, or those who have published online books - consider naming a “tech executor,” in the style of the old-fashioned literary executor, who knows the online world and who knows how the decedent’s online presence can be continued or wound down, as the need appears. This person would work with the primary executor, who would not be expected to have the expertise to know this stuff.

For my own planning, I have left the names of a couple of people that I know who are familiar with the Mac environment and who can help my family make their way through the flies on my system when the need arises. I think that any Mac-literate user could figure out how to find things under Devon even if he or she is not a regular user.

I actually have thought about this. Cant imagine anyone would work out Devonthink. I still struggle and its been 10 years.

Therefore I have used an old fashioned technology called a “Filing Cabinet”, and have printed out my important documents just for this eventuality.

I also have kept a folder structure in Finder on iCloud of important and current documents.

If you’d like to start a new thread about what you struggle with, that may be helpful.