How to automaticly screenshot tweets and ocr them via live text

I would like to screenshot tweets I added from DTTG but make them searchable. So my idea was as follows:

I am not sure if this is the best approach but I think this could work.

I can already snap the tweet, but I have no idea how to run the live text script and save the found text to the Finder Comments (or maybe there is a better place?)

Any help and input is highly appreciated.

The smart rule could simply use the action OCR > to Comment but this requires at least the Pro edition.

yes I have the Pro edition… I didn’t know that this also works for images… thanks!

The script is just sample code. It would have to be modified to work on one or several DT records and save the text fragments somewhere (the same record? another one?). Also, the vision framework tends to deliver results sometimes out of order, which must be taken care of.

May I ask why you take a mostly text medium through these loops instead of getting the text directly?

Historical note: OCR is made specifically for images. Support for PDFs was added much later and intended for PDFs with raster content. It is not a general PDF processor as there are many PDFs that don’t need OCR.

@chrillek Well my goal is to save (and archive) tweets which should be searchable but I also want them to be displayed like I would see them on my phone ( which should include also images), without any clutter / popups etc.

I tried any format from the DT webclipper but all of them were not satisfying. If you have any other idea I would appreciate it to hear them, but taking a screenshot displays the tweet exactly like it supposed to be but it only misses the “searchable” feature… so my idea was to add it later.

I screen shot on the iPhone, saving the png to the DEVONthink ToGo “inbox”. I have a Smart Rule on DEVONthink that converts to PDF (I prefer that format) and OCR’s. 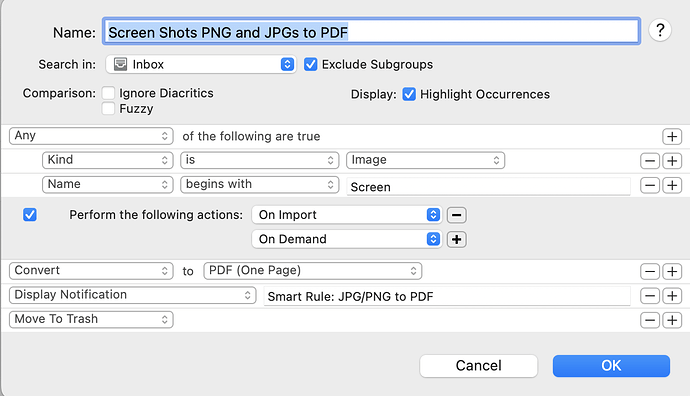 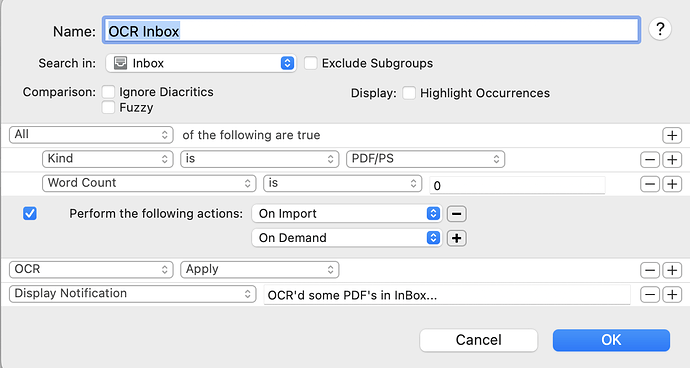 No scripts are needed, but then with scripts can imagine doing more stuff, but this seems to work for me. Only manual step is to rename the file to something more useful.

I’m not using Twitter, so my thoughts might be far off the mark - just ignore them then. Also, I’m assuming that you are doing the capture on your mobile device and using the Twitter app
One possibility might be a shortcut, off ones is available.
Edit This https://www.reddit.com/r/shortcuts/comments/gus6vb/shortcut_twitter_post_downloader/ might provide a starting point.

Another, and I’d probably go for that (personal choice!), possibility would be to use a browser to view the tweets. Then a bookmarklet (a tiny piece of JavaScript code) could capture the text exactly as it is from the website. That would also be possible on a mobile device, I think, ass long as you’re using the browser to access Twitter.
Finally, I seem to remember (maybe wrongly) that there’s an API for Twitter, ie a programming interface.
In my mind, anything that directly captures the text is better than this photo-ocr approach.

@rmschne well that is very similar but requires a bit more manual work since I have to actually take the screenshot and I am not always capturing on my mobile device.

@chrillek yea well my first thought was actually also using the twitter API but it was too much hassle to sing up as a developer there that I just didn’t follow this route.
And the other suggestions could work, however I am using twitter to 80% from my phone via a twitter app and the rest from anywhere else( moslty browser)