I know this has been addressed before, but not seen any applicable solutions.

I have a reminder set on a Group ‘Journal’ to create a new daily journal at 7am every morning, using an external template script.

FWIW, the Reminder is set to (it’s been triggered manually today, so the next time is tomorrow): 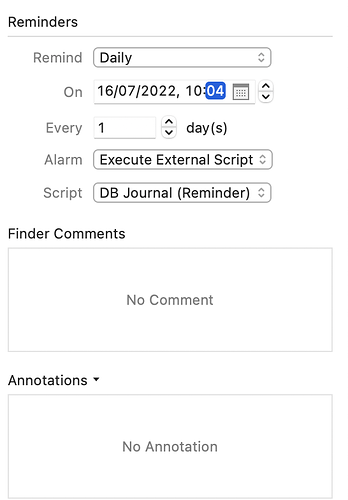 As far as I can see, this means that the template script itself is fine and is working properly (as it should – I mostly nicked it off Jim…) – so it doesn’t seem worth including the script here.

The problem seems to be therefore that the trigger isn’t being pulled at the correct time.

I have no diagnostics on this: the new journal just doesn’t appear, with no message appearing in the Log Window, or as far as I can tell, the Activity Window.

So, the first question is: what steps can I take to log what’s happening (or not happening)?

E.g. are there special logging preferences and/or what should I insert in the script to help the process?

It is never triggered automatically, even when the computer is on at that time and DT3 is running. This morning it still hadn’t triggered by 10am, 3 hours later.

Is the database also opened? Although it shouldn’t be necessary to manually do this. The source of the script would be also useful.

Yes, the database is always open when the script is set to run.

The script is below. As I said, it is always triggered fine when I set the time manually by advancing it a couple of minutes ahead of the current time, but it always fails when it’s set to the next day to trigger ‘naturally’. The script file is properly installed in the Application Script ... Reminders directory – it’s not aliased, if that matters.

I use CloudKit to sync all the databases. The log window tells me: 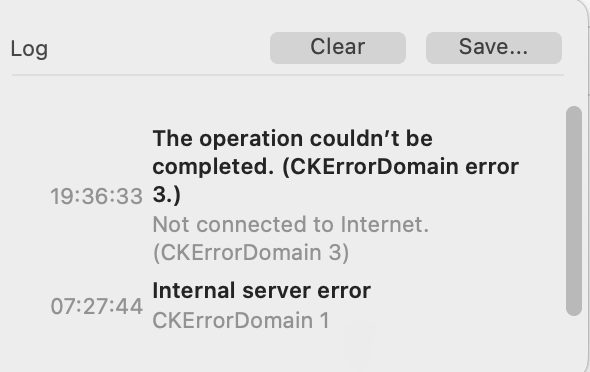 but the 7.24.44 error is half an hour after the script was supposed to be triggered. Could it be related?

Many thanks for your help.

You could add some logging to the script to figure out whether it’s actually executed (see log message command) and also disable the automatic/scheduled sync temporarily.

That’s the sort of thing I was after, thanks.

Any tips on what information to include in the log message – what will support need to know?

Logging at the beginning/end should be sufficient, the result is shown in Windows > Log and includes the time.

An update on this: since reporting the problem, I’ve tried getting this to work as suggested (including turning automatic sync off overnight, and putting log details just after on performReminder and just before end performReminder.

a) If I set the reminder to run at a specific time the next day, it never activates the template at all (the logging messages are not triggered). This is the case whether the computer is on when the reminder is due, or off.

b) The script is triggered every time if I set it manually to a time in the future (i.e. it triggers at that new time). The logging messages are displayed.

When it fails to trigger, there is no sign anywhere I can see that anything has happened at all.

However, this morning, when the computer and DT3 were running and the reminder was due at 08:00, this message appeared at 08:08:

Could the CKErrorDomain 3 error somehow be related, even though it’s six minutes after the due time?

So far, I don’t seen that I’m any further forward. I suppose I could try taking out the internet calls to get the weather and headlines (see the script above), but does anyone have any other suggestions?

The CloudKit error should have no bearing on this at all.

I didn’t think it was, but I’d rather you told me that

Any ideas what could be happening, Jim?

Any ideas what could be happening, Jim?

Are you able to reproduce this after booting in safe mode? Do you use other reminders or smart rules which execute scripts?

I’ve not tried it in Safe Mode, but I’ll try to reminder to set it up tonight to see if the script is triggered in the morning.

As far as I can tell, I’m not running any scripts as reminders or rules apart from this one.

I continue to have the same problem as @brookter. it does not seem to be related to the type of event the reminder triggers though (e.g. in my case the reminder is supposed to display an alert). at random times the reminder ends up getting triggered erratically after all, but not periodically (although it is configured for a daily trigger)

in other words if I can help with the debug, I’d be happy to…

Would be good to know if there are other reminders or smart rules using scripts and whether the computer is awake & DEVONthink running when the reminder is supposed to happen. Thanks!

alright, so here we go:

I have five smart rules, two of which trigger scripts:

finally the machine is running most of the time, so the daily reminder (supposed to trigger at 9:00am) sometimes would find a sleeping machine, but mostly one running / being awake…

oh and one more: like the OP I am observing the phenomenon that putting a reminder into the immediate future, e.g. two or three minutes from now, it does get triggered, however it won’t tomorrow (when configured as daily)…

I have five smart rules, two of which trigger scripts:

Is any of the rules scheduled periodically or On Reminder? Finally, a screenshot of one of the reminders would be useful, thanks.

I have attached a screenshot from the daily reminder (it’s actually supposed to trigger at 10am). I hope this is what you were looking for… 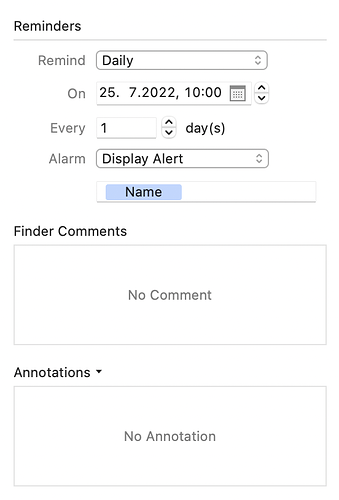 Please choose Help > Report Bug while pressing the Alt modifier key and send the result to cgrunenberg - at - devon-technologies.com - thanks! Maybe there’s a hint in the logs.