How to get at records in annotation group in a script?

EDITThe problem arose from having several DT windows open at the same time. Since the thread might still be interesting for others, I’ll leave it as it is.

I have a single PDF record with an annotation (not a PDF annotation, though), namely a link to another DT record (an e-mail). So, the annotation inspector shows the title of this record as a link, and when I click on it, the e-mail is opened. Also, the database’s annotations group contains an RTFD record with this single URL as a link. So far, so good.

Now, with this PDF record (i.e. the annotated one) selected, I want to get all the records in the corresponding annotation group:

So, annotation() of a non-text record does not work (as per the documentation). But shouldn’t the database’s annotationGroup behave like any other group and tell me about its children? I checked that the type of annotationGroup is indeed “group” and that the group has a UUID.

And group.children().length on a “normal” group works just fine, BTW.

I’m probably doing something stupid here. But what?

Not sure I understand what you’re trying to do. Do you want to get all children of the annotation group?

I’m probably doing something stupid here. But what? 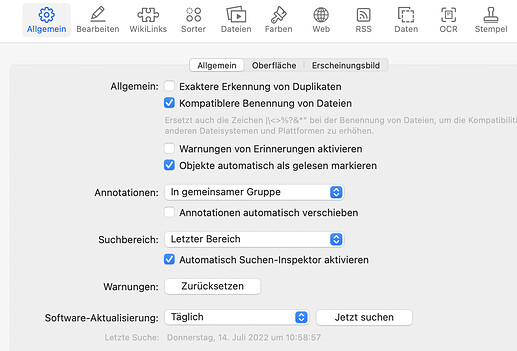 I must admit that I find the wording in the German UI a bit confusing – what would be the difference between “in gemeinsamer Gruppe” and “in derselben Gruppe”? Both expressions seem to imply that there’s exactly one group, one time it’s a shared one and the other time it’s “the same”. The linguistic problem here seems to be (I may be wrong) that “group” refers to the annotations group itself (in the first alternative) and to the group of the record (in the second alternative).

After having read the documentation, it’s a bit (but only a bit) clearer: “shared group” means “one group at the root of the database” whereas “the same group” means “an annotation group that’s located in the same group as the record” (probably).

Anyway, yes, my annotations group is shared for the database. 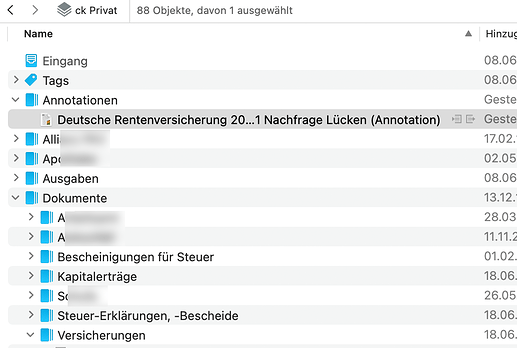 @pete31: That script actually does what I want (also the JavaScript version). Now, I thought that I could find out the annotations group of a database starting from a record. Something like that:
set annotationGroup to theRecord's database's annotationGroup
(I apologize for my broken AppleScript lingo) or (in JavaScript)
annotationGroup = r.database.annotationsGroup();

This, however, gets weirdly wrong. I have a record selected in the currentDatabase (intuitively, I’d say that it is not possible to select a record in any other database but the current one, but maybe I’m wrong?). However, when I run my script (see above, it gets the first element of the selectedRecords list), this record has a different name and belongs to a different database.

gives me this output:

which is (at least to me) completely bogus: “Ausgaben” is a group in database “Bru6”, and it’s very much not currently selected. And yes, I’ve already restarted DT, which didn’t change anything.

I must admit that I find the wording in the German UI a bit confusing – what would be the difference between “in gemeinsamer Gruppe” and “in derselben Gruppe”? Both expressions seem to imply that there’s exactly one group, one time it’s a shared one and the other time it’s “the same”.

Any suggestions not being excessively long?

selected records can’t be changed but you could remember the UUIDs. After restarting look up the records and set the selection of the main window.

Just to clear that up: I had actually three DT windows open (probably from fooling around with the Alfred workflow). The selectedRecords I received in my script were from the bottom-most window, most likely the first one I opened. An interesting border case for scripting, I think. One would have to figure out the active window before getting selectedRecords, it seems. Another thing learned.

Any suggestions not being excessively long?

The next release will revise the German localization.