How to make files with the ending ".md" have the kind "Markdown Text"

BLUEFROG. FYI I edited a md file from DEVONthink 3 in Ulysses today and it now has, in the “kind” column, md just as it was I think but with what I think are Japanese character added after that. I doesn’t bother me really but I wonder why that happened?

Can you drag the file onto your desktop, ZIP it, and post it?
If not, could you start a support ticket and send the file to me?
Thanks!

I will try, I think that is what you meant me to do.

See here. If you got the same characters they are Chinese.

Thanks, I was wondering. I am not really bothered by them at all. In fact it is quite cool? So it means ‘file’ in Chinese. Something that is useful for me to know in fact. It will be useful one day I am sure!

I’m not seeing an issue here. In the Finder, select the file and press Command-I to open the Get Info pane. What is reported there?

Same thing. I will put a screenshot. I will say @BLUEFROG this isn’t bothering me at all. I just mentioned it FYI if you will. two files went that way. One called “The Republican Party” 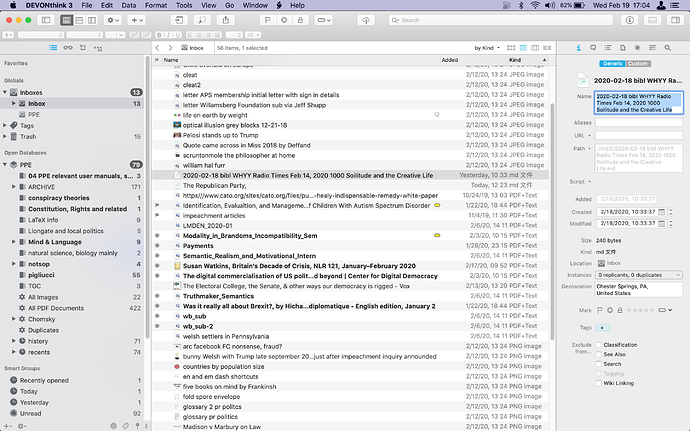 So the Finder reports the filename with the Hanzi characters too?

No the Finder says just md under “Kind”.

I’m also seeing the exact same problem as OP: suddenly my Markdown files all have the kind ‘md’ while Finder reports them as ‘Markdown document’. They all have the extension .md. Any suggestions how to fix?

Does a reboot fix this?

Yes - it ultimately did - thanks!

I had no idea how to fix it by the way. I forgot about it to tell you the truth!

Currently my markdown files on one Mac have a Markdonw “kind”:

Any idea way? (No I don’t have at any time switched on Japanese locale.)

And how I can fix this? (Restart doesn’t change it.)

Is this identical to the kind in the Finder?

So it is not a DEVONthink thing, right? But where on earth does it come from?

No, it’s definitely not a DEVONthink thing. Our app gets the information from the Finder.
Try logging out and back in or rebooting to see if it persists.

Thanks. Did another restart. Still the strange Markdown kind. Nowhere else I have Japanese stuff…