How to retain line breaks in quotes using markdown?

I’ve been suffering for a while, unable to get the result I’m after, and after failing on my own I figured I’d ask. When I’m writing lyrics for music or poetry or other such stuff, I need control over the line breaks, and I’m having trouble achieving that with markdown.

Perhaps I’m confused here, but I expected block quotes to respect my formatting choices, seeing as they’re a quote. Can anyone guide me to some options? Thanks!

Please post a screen capture of what you’re expecting to see, perhaps mocked up in a rich text file. Thanks

When I’m writing lyrics for music or poetry or other such stuff, I need control over the line breaks, and I’m having trouble achieving that with markdown.

The way I deal with that is to ensure there are two spaces at the end of each relevant line. For me that also works if I add the block quote symbol at the start of each line.

If you want each line to end just here
Ensure you add two spaces - clear?

It looks like this I must explain <space><space>
I hope that that has made it plain!

Edit: Apologies for appearing, presumptuously, to reply to Bluefrog. That was not intended!

I had no idea…and this fixed an issue I have with multi-paragraph block quotes in MD. Thank you!

I’m sorry it has taken me so long to get back to you. I’ve been in the middle of selling a house and moving, so this had to wait. I’m attaching a screenshot produced in DEVONthink on macOS to illustrate what I’m talking about. 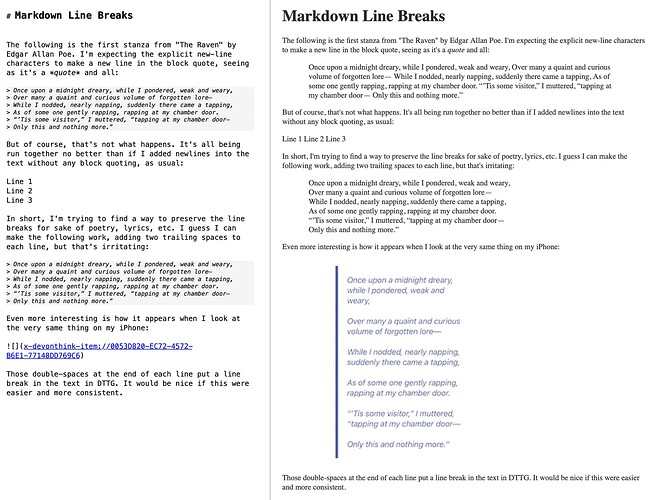 Well, the problem can be remedied by adding two spaces to the end of the lines to indicate the required break. As has been mentioned before.
This is probably a MD feature, and the question arose before:

Should markdown preserve newlines in blockquotes?

See also this post which indicates that the two spaces at the end of the line will not be necessary once the next DT version is released.