How to stop continuous email import from "Add (mailbox) to DT ..." in Apple Mail?

I accidentally chose “Add to DEVONthink 3” in Apple Mail. Now, everytime Apple Mail and DT3 are open, there is a continuous flow of new incoming mail to my Global Inbox in DT3. I cannot figure out how to stop it. Deactivating the Apple Mail plugin and reactivating it did not work.

How can I stop this permanently? Killing it in the Activity window of DT3 just interrupts it. The process will start again after the next reboot.

Actually DEVONthink 3 doesn’t support automatic email archiving/importing, only on demand. Do you use any rules in Apple Mail?

Did you use the Add to DEVONthink 3 command in the Mailbox menu instead of the Messages menu?

Yes, I chose it from the Mailbox menu.

@BLUEFROG Is there a way to revert this decision? How can I remove a mailbox from DT3? Do I have to tweak with config files of the Apple Mail plugin, or where is the right place to change this?

You can delete the Imported mailbox in DEVONthink and empty the database’s trash.

When importing from Apple Mail choose the correct menu.
Also you can use DEVONthink’s View > Import sidebar to import emails.

I am sorry for asking further, but I can’t find a way to delete the imported mailbox. On the View > Import sidebar there is no context menu available, nor do the items react on the backspace key.

I am sorry for asking further, but I can’t find a way to delete the imported mailbox. On the View > Import sidebar there is no context menu available, nor do the items react on the backspace key.

These are the mailboxes available in the email client(s) but not the ones imported to your databases. According to the screenshot the imported stuff is in the global inbox.

@cgrunenberg is of course correct about where to delete the imported mailbox.
Switch back to View > Navigate to see your databases and groups.

On the View > Import sidebar there is no context menu available, nor do the items react on the backspace key.

You have an account selected here, not a mailbox. DEVONthink doesn’t show the contents of an account. If you open that account further, you will come to mailboxes where you can archive entire mailboxes or import selected emails.

PS: Email archiving is covered in the In & Out > Archiving Email, Windows > Sidebar: Email, and Preferences > Email of the built-in Help or manual.

I once set up a rule in Apple Mail that added every incoming mail to DT3. Deactivating and later deleting this rule did not stop the flow of mails piling up in my DT3 Global Inbox.

Now, not every mail is added to DT3 but some are added multiple times. 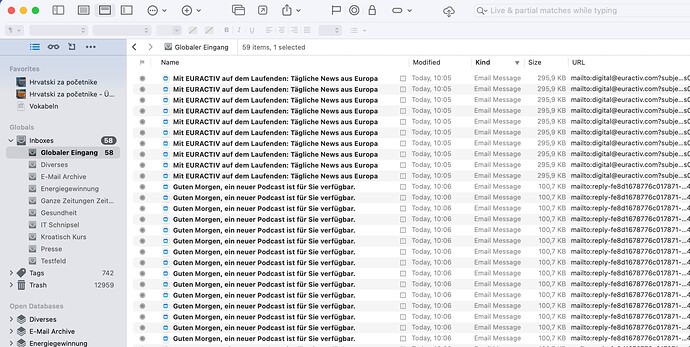 Deactivating and later deleting this rule did not stop the flow of mails piling up in my DT3 Global Inbox.

Is there definitely no more rule in Apple Mail? Because that’s the only way to automatically archive/import emails currently and the View > Sidebar > Import interface (and likewise the Mail plug-in) skips already imported emails.

Or is there anything in the folder ~/Library/Application Support/DEVONthink 3/Inbox? 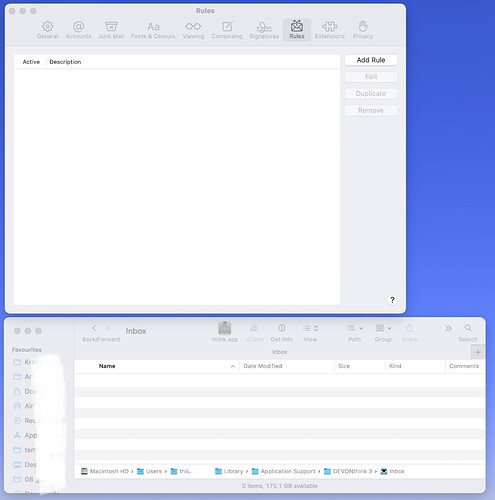 We’ll see if it still occurs. There are no rules anymore and the folder ~/Library/Application Support/DEVONthink 3/Inbox is empty, as you can see on the screenshot.

I still had a rule in Apple Mail yesterday, which had been deactivated for several days. I deleted it yesterday evening. I guess this was still working, although deactivated. Today I opened Apple Mail on a different Mac. Maybe this was still processing the (deactivated!) rule until it synchronised the deletion of the rule.

At the moment there is no more mail flowing in to DT3. All this trouble might have occured because of Apple Mail still processing a rule, that had its “Active” checkbox unticked for several days.

Keep an eye on this and let us know if it acts up again.