how to sync the database between devonthink pro and devonthink to go with icloud?

Note: DTSync is done locally. After sync is finished, iCloud uploads to Apple’s servers, then to devices using your Apple ID. This means databases may not be immediately available to sync on the other devices. The initial sync requires patience, as we have no control over the speed and reliability of iCloud’s process.

On the mobile device…

I have a database I created in the DevonThink Go app that doesn’t seem to sync over. Why are some of my databases local and others as remote? 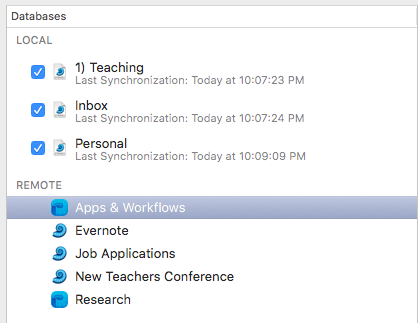 You need to right-click and import the databases. They won’t just sync automatically.
Remote databases are ones that are available for import.

Thanks so much! It worked. Now how do I go about deleting a database or should I just worry about which databases are synced between my Mac, iPad, and iPhone?

You’re welcome.
Deleting a database from where…?

Hi,
do I have to enable DEVONthink for syncing in the Mac preferences in iCloud (iCloud Drive) 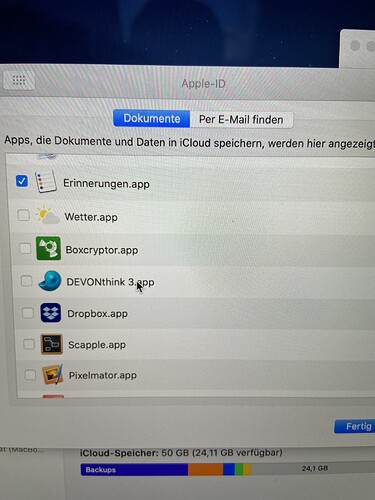 Afaik this preference setting is not about sync, but about backup. You can enable it to save you databases to iCloud. But it will not help in keeping them in sync across devices.
And please follow @BLUEFROG’s advice elsewhere: if you don’t need remote sync, don’t use it but go with Bonjour. That’s easier and less error prone.

Ok, thanks for your advice.

Yes, that option needs to be enabled to use an iCloud sync in DEVONthink.

I have tried this right clicking and importing option, but I cannot seem to get it to work. I have a file in the upper Local section called “Old DevonThink Data” that has sync’d a few times today. But when I right click on it there is no option to Import or to move it to the Remote section below. Well, there is an option to import but it is grayed out.

I would like to be able to access this data in this database on my iPhone in DT2GO but cannot for the life of me figure out how to do that. Any suggestions here?

Nevermind - it literally just showed up after I hit the send key on this. Go figure. Thanks anyway.

Welcome @Pondleaper
Patience is required on an initial sync, especially with iCloud.

What can I do more?

I’m a little confused about the words you are using, e.g. in the DEVONthink Manual there is no reference to iCloud drive. And what “settings” you are referring to. You should not really see anything in your iCloud Drive as it’s all hidden.

My best suggestion is that you go back to p. 62 in the 3.6.2 version of the Manual and re do steps and see if you can spot where it went off kilter for you.

The option of sync via iCloud doesn’t appear in Devonthink > Settings > Sync.

And I have the Devonthink toggle enabled in iCloud Drive… has told in previous posts.

Ok. Yes, I noticed you enabled the DEVONthink in iCloud Drive … but, as described, to be honest I’m not familiar with that toggle switch setting which you only mention now. Perhaps you can post here screen shots of these two screen showing the toggle switch, and Sync dialog box where you don’t see “iCloud (Legacy)” and “iCloud (CloudKit)”. Also which version of DEVONthink are you using? 3.6.2 is the latest.

I do hope you have not put your DEVONthink data on iCloud drive folder?

The iCloud Drive is set in macOS Preferences-there is a screenshot of it 10 or so posts up.

Interesting. Since far as I can see not mentioned on p68 of Manual I never sought out to toggle that switch which is why I was unfamiliar with it. Without setting that “toggle” (could not anyway as DEVONthink not listed as an option anyway), I just setup an iCloud (Legacy) in the DEVONthink manual for one database and it works. So I do not know what’s gone wrong with @hugoatmonteiro hence I suggested redoing the steps from the manual. Best I can do now. I’ll leave other experts to followup this thread continues.

Update: in the apps using iCloud in system preferences, I clicked on the “options” button and found where DEVONthink was indeed turned on. Probably done years ago. So it is on. But steps to setup sync on Page68 describe more things and mystery why @hugoatmonteiro can’t see it.

Thanks Greg, but like I said: that toggle is on