I am considering reverting to DTP2

And I don’t like the new window setups & how they work.

So I am thinking of going back to v. 2. If I try to open in 2, databases that were opened in 3, will I risk corrupting them? I could use a v. 2 backup from a week before I first opened v. 3.

Any special instructions for going backwards?

And, do you anticipate problems between Catalina and DTP 2?

There is no difference with the database file format.

And, do you anticipate problems between Catalina and DTP 2?

DEVONtechnologies | Catalina and Our Applications

Also, 2.x is in maintenance mode, i.e., only receiving critical bug fixes like crashes on startup.

Is you have crashes in DEVONthink 3, you should be opening a support ticket to assess the possible cause.

My conclusion would be that there is a local problem in your situation. Personally I would research the crashes, as it might be a certain filetype, but could also be a SSD/HDD failure to mention a serious other cause.

@BLUEFROG can probably help you send a crash report, and help you understand what happens.

You could of course run DT2 if you’re worried about corruption. But if the above causes would hold true, that will not help you in the end.

Are you running incremental (time machine) backups on a separate backup medium?

Go64 warned me that one library used by Abbyy Finereader Pro 12 was still 32 bit. So, if you use standalone Finereader instead of DTPO, you might still run into problems.

I tried DTP3 from the first beta until its final release and couldn’t get used to it.
I am using DTP from V1 but DTP3 breaks so many habits in my workflow that it becomes totally useless for me. And the loss of using separate search windows is one of the worst things in DTP3.
No, I will not rethink my workflow, because it works in DTP2 and matches my daily work.
As long as DTP2 works on my Mac…all is well. Maybe in two years, there is an alternative.

I have an old Finereader app, for Scansnap, on my laptop but have not used my scansnap scanner since installing DTP3.

Can try deleting it but it seems unlikely to be the cause. As far as I know importing text into DTP just uses DTP’s facilities.

I too have a scansnap (SV600), but the standalone Finereader Pro has an interactive mode that lets the user override Finereader’s layout recognition. 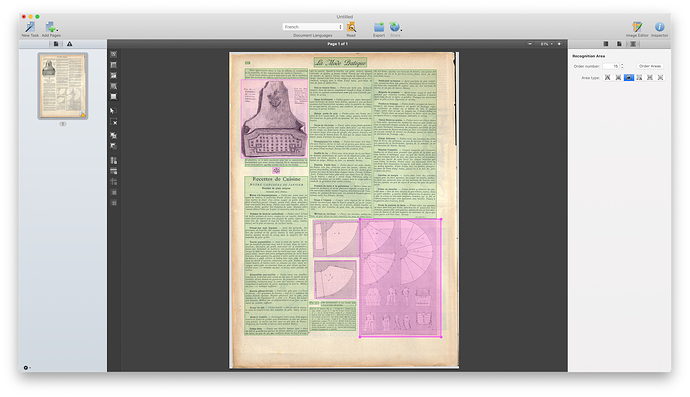 Probably not a thrilling feature if you’re just focused on importing receipts and other forms of paperwork, but it is somewhat useful for ebooks. Unfortunately, you can’t retrain the OCR algorithms, and you can’t manually correct the recognized text. And it still doesn’t recognize Fraktur.

However, Finereader Pro is partially controllable through Applescripts, including DevonThink scripts.