Hello!
I am not familiar with DT yet but so beg your pardon if the topic had been discussed yet.
Sync in DT2Go couldn’t be finished (it takes about seven hours and then stocks on about 90%). 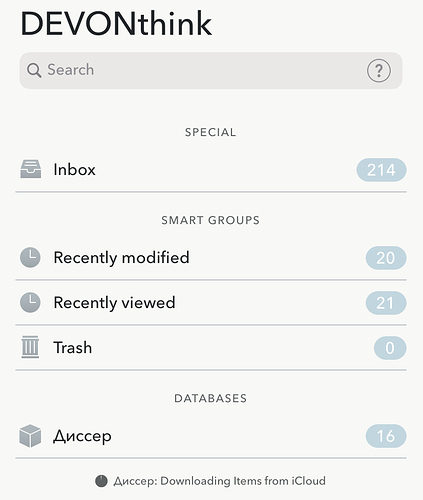 Sync in DT2Go couldn’t be finished (it takes about seven hours and then stocks on about 90%).

iCloud might cause large delays as Apple’s operating systems & iCloud servers control the up/downloads and perform uploads asynchronously. How large is the database?

I know about the delays. But I’ve been trying to sync the database (which is approximately 14Gb) for a long time.
Also I’ve noticed that synchronization stops if you switch to another app (without closing DTTGo) and even if you block the screen. So one should keep DTTGo opened while it is synchronizing. I’ve tried to do so for several nights, nonetheless the sync status icon never finishes.
Does synchronization start over every time?

No, the synchronization should actually continue, roughly, where it was stopped before.