I have a problem to setup sync on my iPad with DTTG.
On my Mac i have a Personal database synced to icloud.
On my iPhone i had setup icloud sync in DTTG. After putting in the encryption key
I got the option to import global inbox and the Personal database on this device.
All worked fine.

On my IPad when I put in the encryption key, DTTG accepts it but only offer the
Global inbox to import not the Personal database.

It’s very annoying i’m trying to get it to work since several hours now.

The last months the sync between Mac iPhone and iPad worked well until there occured issues with syncing new items from time to time to the iPad. Some new files weren’t shown.
So i decided to uninstall DTTG from iPhone and iPad, deleted the DTTG data storage in Mac icloud storage management after I deactivated and deleted the icloud sync in devonthink personal on the Mac. Now I can’t setup the icloud sync on iPad because the Personal database isn’t shown in the overview after providing the encryption key for the sync.

Please start a support ticket by choosing Help > Contact Us in DTTG.

I see the same. Can you please provide the info how this was solved. 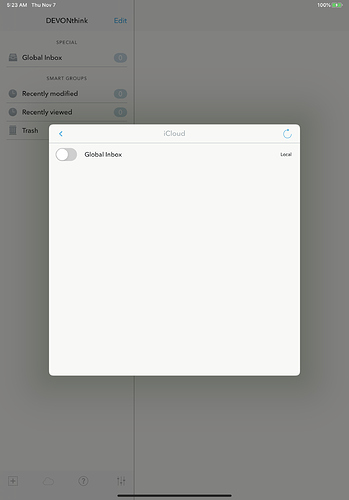 Ohhh… I don’t know how i can forgive myself. iPad was not connected to internet. It works now.

Just in case other people come to this thread looking for answers, I have had this problem a lot. I seem to have come down to two observations.

One. It seems as the sync between Mac and iOS can sometimes just take a while. If I create a database on Mac, It can take between 10 and 20 minutes before my iOS device will allow me to sync it. Certainly this could depend on Internet speed as well.
Two. Don’t you need to allow syncing of Individual databases inside the sink menu on Mac?

It’s impossible to gauge the speed of anything iCloud does, as it operates on its own schedule.
And yes, just as with any remote sync option, the quality of the network you’re on as well as the hops between your machine and the server factor in. Also, the speed and responsiveness of the remote server counts too.

And yes, you have to opt-in to syncing anything in DEVONthink. Those are choices YOU have to make. The software shouldn’t decide to start syncing a database without your permission.

Suffice it to say, these are more than acceptable functions of software. One benefit of using first-party software is it likely is fast tracked on iCloud. However the feature set is always minimal and unimpressive for complex workflows. I have spent the better part of three years discovering DT, then finally justifying the purchase, then continuing to question my usage in the face of software with a variety of overlapping but not identical feature sets. And I continue to come back to DT and DTTG, despite some of my own workflow demands that can’t be met. 🤷🏻

Apparently, synchronization between DT and DTTG is a constant problem. There are always incomprehensible difficulties.

all systems with latest operating systems
and latest version of DT

APP on iPad Pro 9.7" deleted
Newly installed - Sync with iCloud initiated
At the moment the sync does not stop and the occupied memory space breaks the frame.

What is being loaded? There is a lack of information on how the snyc process works.

What a bummer! Those were lost again several days!

Isn’t there a clear step-by-step guide to solve such problems?

Isn’t there a clear step-by-step guide to solve such problems?

Unfortunately not because (almost) all of these issues are caused by iCloud which is even less reliable on iOS 13 and Catalina than it was before. We’re still trying to reproduce and work around these issues.

Thank you. I’ll take care of it.
I deleted the APP and restarted the iPad.
The disk space is free again. What can I do on the iCloud
change? Since the first iPad syncronizes cleanly with the iCloud, I don’t want to empty the iCloud location.
Should I synchronize the second iPad first over Bonjour?

I can only access the Internet at my location via mobile radio at an acceptable speed and my transfer volume is 200 GB per month.

Any attempt to synchronize the database via iCloud is therefore time-consuming and costs transfer volumes.

Should I synchronize the second iPad first over Bonjour?

I can only access the Internet at my location via mobile radio at an acceptable speed and my transfer volume is 200 GB per month.

How fast is the Internet actually, especially the downstream? Is there enough disk space available on this iPad and how large is the database?