hi,
i am using icloud sync for my databases. i just noticed that under ~/Library/Mobile Documents/ there is a category Devonthink 3. Has 55gb, which seems to be less than my DBs on disk (72gb). does that mean when i use icloud i need to blow twice the disk space? I am pretty certain this wasn’t the case with dropbox
BR

For iCloud, DEVONthink’s syncing is done locally then iCloud does its own syncing on its own schedule. It’s up to iCloud to clean up after itself.

You can do a thorough verification to reclaim some space but iCloud has also download to this location as it will.

I have just switched from Dropbox to iCloud syncing and also noticed this new folder in ~/Library/Mobile Documents/ which I assume is the iCloud syncstore. In Dropbox the advice about the syncstore is to exclude it with Selective Sync to avoid the unnecessary space being used locally.

Now that iCloud has its own ‘selective sync’ option (right click > delete download) I assume this can be done for the iCloud syncstore, as for Dropbox? This will leave it in the cloud but not take up the extra space locally.

You can right-click the whole Mobile Documents folder but this would remove the local copies of all iCloud documents.

So it seems there is a local space penalty for iCloud sync compared to Dropbox sync. 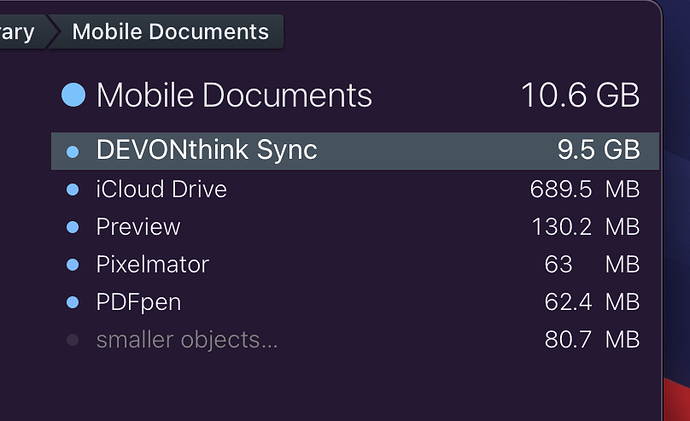 *EDIT: See below for a safer method.

and then see if that has any unwanted consequences. If not, you can remove the folder from the desktop later. Otherwise, move it back to ~/Library/Mobile Documents

Thanks @chrillek. I did wonder whether there would be a Terminal method.

However, I think there is a distinct difference between “Remove Download” and “Delete” which rm -rf would do.

“Remove download” will leave the file in the cloud. “Delete” will delete the local copy which will cause it to be removed from the cloud as well.

If there was a Terminal instruction for “Remove Download” that would be good.

I would highly discourage to try this, this might kill or clean the sync store. The easiest way to get rid of the current local copies is to verify the complete sync store (at least this tells iCloud again to remove the local copies).

Thanks both. Before seeing cgrunenbergs advice I did try:

I am not very Terminal literate so may have got the Syntax wrong.

I figured this is not high risk activity as worst case I could set up iCloud sync again and I have lots of backups.

I have tried the verify suggestion. I did this by right click the iCloud Location in the Sync prefs and selecting “Verify Location quickly” see screenshot. Is that what you meant? It has not removed the local copy of the syncstore. 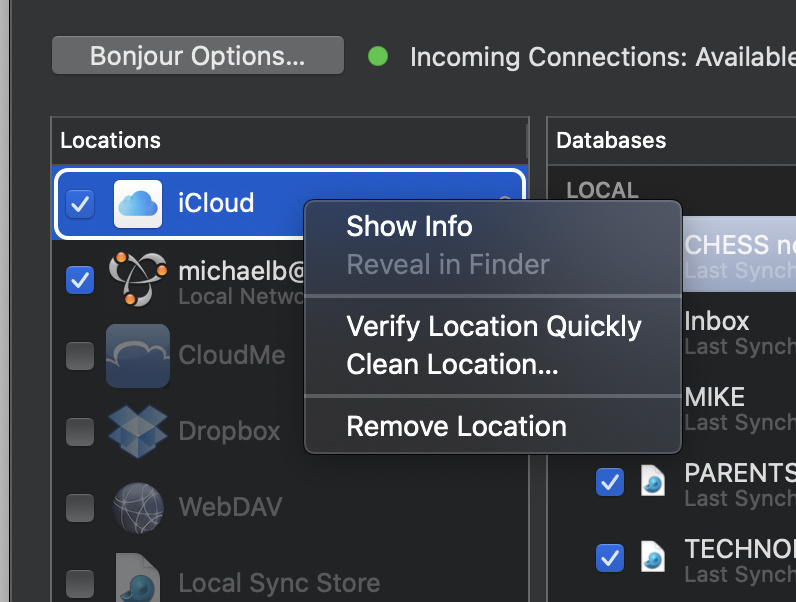 I have tried the verify suggestion. I did this by right click the iCloud Location in the Sync prefs and selecting “Verify Location quickly” see screenshot. Is that what you meant? It has not removed the local copy of the syncstore.

I had forgotten about using the option key to get “thorough” verification or I would have done that first time.

Anyway it has indeed removed the local iCloud Sync Store so thank you very much!

I am not quite sure why that would remove the local syncstore, and will it come back?

This has been covered numerous times in the forums: DEVONthink doesn’t have total control of that directory. iCloud can download items to it as it sees fit, so yes you could get data in it again.

Thanks and apologies. I did search quite hard which is how I found this thread, where I now see you mentioned the thorough verification at the beginning. I had hoped initially that the relatively new right click > remove download might offer the possibility of more control equivalent to Dropbox’s selective sync.

I have done a thorough verification to remove the iCloud syncstore form both my Macs and will keep a lookout for its return.