Now that importing an entire email to DTPO seems to work fine what about the attachments ONLY? I receive lots of emails with PDF attachments. And, honestly, most of the time I am only interested in the attachment.
Is there a way or a script work-around so I could import only the attachment or extract the attachments from the emails within DTPO. Bottom line, I like to have an automated process instead of drag-and-drop manually the mails using currently the sorter.
thank you for your thoughts (and maybe a little script

The question is not how to import an email with its attachment…
it’s how to EXTRACT the eg PDF attachment from an imported mail as an independent document. (Which I could then convert into an indexed, searchable doc)
Going through all of the scripts in the scripts menu, I cannot find something that does the task. Please advise, since I seem to be blind

From the script menu in Mail.app: 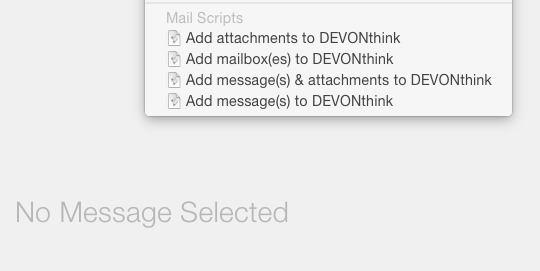 all that has been done. the scripts are in ~/Library/Scripts/Applications/Mail. I see them there in the folder. I’ve closed and opened and even rebooted the machine. There is no scripts menu on the right hand side of the menu. sorry.
the only addendums to the mail menu are incorporated into the mail menu. under “Mailbox” there appears an item “Add to DEVONthink Pro Office” and under the “Message” it also says “Add to DEVONthink Pro Office”. Both scripts were written by you and dated 2004 resp 2005. the other two scripts in the very same directory folder dated March 5, 2012 resp May 18, 2012 don’t appear anywhere. I have even (re-)compiled them using command-k and then saved them using command-s.
I also just compared these scripts with the package content of DTPO in the /App… folder. they seem to be identical files.

and now? thanks for you support.

bingo. there!
no clue why. thank you again!

now, back to the original question: how do I extract an mail attachment from WITHIN DTPO, an eml file? Would you pleas be so kind a provide a script for such an extraction as well.
thank you.

sorry to keep coming back to this important topic:

The scripts will send all of the attachments (and the messages resp the mailboxes) to the general INBOX of DTPO. It makes no difference if I use Apple-Mail or Microsoft-Outlook. After looking at the scripts the line “incoming group” is responsible for that behavior. (thank you for taking the time to write these scripts in the first place.)

The Mail Plugin seems to do the right jobs and gives one the selection on where the stuff should go to. But, I can’t have a look at the Mail Plugin on how that is done! Why do I need to do that? Well, I still must import the attachments from the ‘eml’ files that already reside in the DTPO database from (very) old mails. So, it is all very nice that from now on I can use the behated Apple-Mail program, but for my old archives (we talk about several gigabytes resp. several years with thousands of folders!) it does me no good.

now, back to the original question: how do I extract an mail attachment from WITHIN DTPO, an eml file? Would you pleas be so kind a provide a script for such an extraction as well.

That’s not possible. One workaround is to export all emails as a Unix mailbox, import this mailbox to Apple Mail and to reimport everything.

@merkc You might want to take a look at this: Separate imported e-mail attachments for better search - #3 by mdbraber