I could use some help with awareness and understanding of how the “Import Folders & Attachments from Apple Notes” works, and how to use it best?

First - Researching the Forums, I see occasional mention of problems with “Subfolders” but can’t find a detailed explanation. Is it the case that I must reorg my Apple Notes to no subfolders?

Second - I have seen mention of “problems with Catalina” in this regard, but I have no idea what that may be referring too?

Third - Is there a “General Consensus” on which Notes Apps provide best integration and performance for Devonthink users?

Apple Notes, Bear, 1Writer, etc. are all mentioned as popular. Is their any guidance from Devonthink about how to think about Notes and Devon, which apps might work best etc.?

Any thoughts or suggestions would be very much appreciated

First - Researching the Forums, I see occasional mention of problems with “Subfolders” but can’t find a detailed explanation. Is it the case that I must reorg my Apple Notes to no subfolders?

Due to bugs of Apple Note’s AppleScript support on Catalina this does not always work, e.g. if the option to use the “On my Mac” account is enabled. In addition, DEVONthink requires full disk access in system preferences.

Third - Is there a “General Consensus” on which Notes Apps provide best integration and performance for Devonthink users?

Any app storing its data in the filesystem (not in databases) and using standard file formats (e.g. HTML, rich text or Markdown) should be fine.

Exactly. And I would also not recommend any app (e.g. Notes or Evernote) that can’t easily bulk export data in a useful format. You’re almost trapped and the only reason that this is not the case is that other apps add special import features.

Any thoughts on the “Subfolders” issue? Is it OK to use Subfolders with Import Apple Notes Folders & Attachments?

It might work depending on Notes’ preferences, I would definitely recommend to disable the On My Mac account. 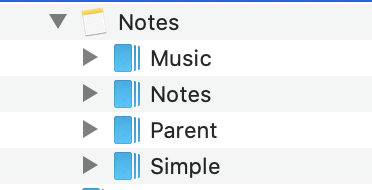 PS: DEVONthink is not syncing with Notes, so if you add other notes in Notes, they aren’t automatically added to DEVONthink.

When I try to import from Apple Notes, nothing gets imported. The log appears and shows “0 added”.

I assumed that the problem was that I used sub-folders in Apple Notes. But here you say that the import now works with sub-folders.

Do you have any idea why the import isn’t working for me?

Does it persist after a machine reboot?

There is also an app named “Note Export” in the MacOS AppStore that will export Notes in MarkDown, RTF, PDF or Doc (Word) formats. It mirrors the Notes folder structure inside the destination folder so you can easily import from the file system into DEVONthink.

Lee: Thanks for the tip. I’ll check it out.

Hold the Option key and choose Help > Report bug to start a support ticket so I can see the logs. Thanks!

Today, the import worked. I don’t know what caused it to work now after it did not work. I had deleted most of my notes in Apple Notes after importing them into DEVONthink using another app. But I still had shared notes in Apple Notes (in iCloud) and I created new notes in other folders, including a sub-folder, as a test. Everything looks good.

Your “PS” is much appreciated.

Glad you found it helpful

I just installed Devonthink V3.7.2. and wanted to transfer my apple notes database to DT3. It is a huge collection with a lot of scanned pdf attachments. I tried several times the option: “Import Folders & Attachments from Apple Notes”, but the import of the attachments doesn’t work. The notes with all subfolders are transferred correctly to DT3 but no attachments.
I am using BigSur 11.4 on a M1 Macbook Pro. DT3 has full disk access and the “On My Mac” account is disabled. DEVONthink has rights to talk to Notes in System Preferences - Security & Privacy - Automation.

So I tried all recommendations I could find in this forum, but still no attachments are transferred from apple notes to DT3.

This may be a problem with Apple Note’s AppleScript functionality. We’ll look into it.