Hi, I wonder if anyone could tell me how to get around this problem please, what I’m doing wrong.
There’s probably another way of achieving what I want.
I’ve put a screenshot below.

I’m new to DEVONthink and am transitioning from Evernote (10) When I import a notebook the individual notes are split into a HTML file and the enclosure picture/pictures which keep their Date Created and Date Modified dates correctly but they are automatically grouped together in two separate files/folders inside an enclosing icon of what looks like multiple pages folder, sorry don’t know the name for this yet.

My problem is that all the imported folders that contain the individual notes have the exact same Date Created and Date Modified dates applied to them, the date and time I imported them from Evernote, please see example below, so this means I can’t view my individual notes any more in date order, they are completely mixed up because of this.

Could someone tell me what I’m doing wrong please or another way of viewing my notes please. 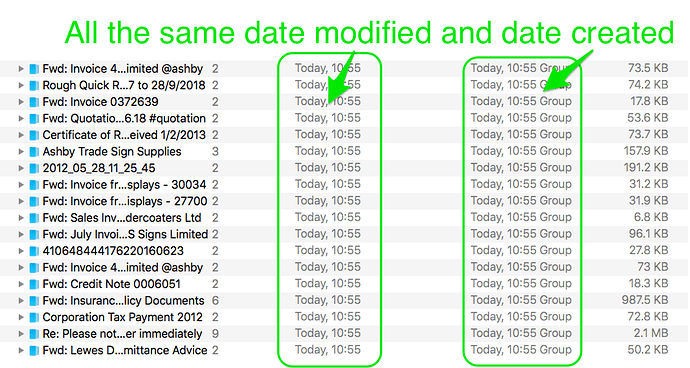 Hi, It’s me again, did I just figure this out for myself or is there another thing I should be doing instead?
I went to the view menu and chose the option: Show Only Documents 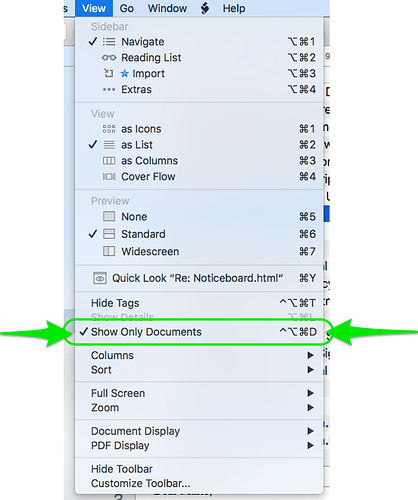 The groups didn’t exist before the import so logically they have new dates.

Hope you can see what my problem was, I had 1650 groups with all the same date, it would have been better if they had inherited the dates of the enclosing files because they were created and modified on the correct different dates when they were created, not just copied over.
I’ll figure it out in the end.

Yes, I see but again, those groups didn’t exist in Evernote. They were created through the import process.

Development would have to assess this behavior.

The next release will improve this. 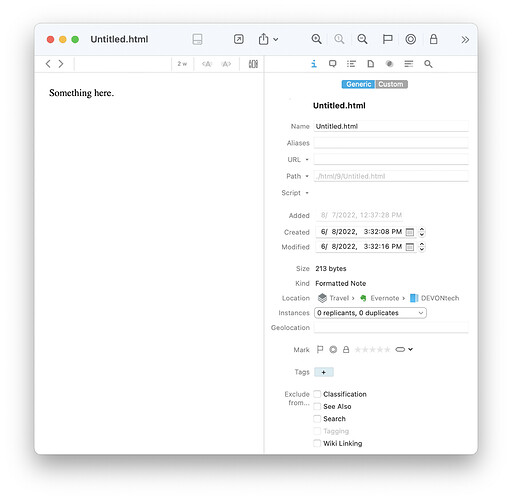 The file was added today but created and modified two months ago. 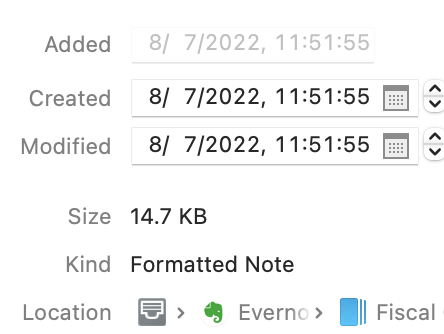 Hmm. That’s not what I’m seeing. I used the File > Import > Notes from Evernote option in DT 3.8.5. It’s the same for every file imported from Evernote:

Which version of Evernote do you use? Does it work by importing an exported ENEX file?

Evernote Legacy, 7.14.1. I can try to import an ENEX file. I was using the menu option in DT to import from Evernote.

Can you get a note’s info in Evernote via Command-Shift-I and verify the creation and updated times, e.g… 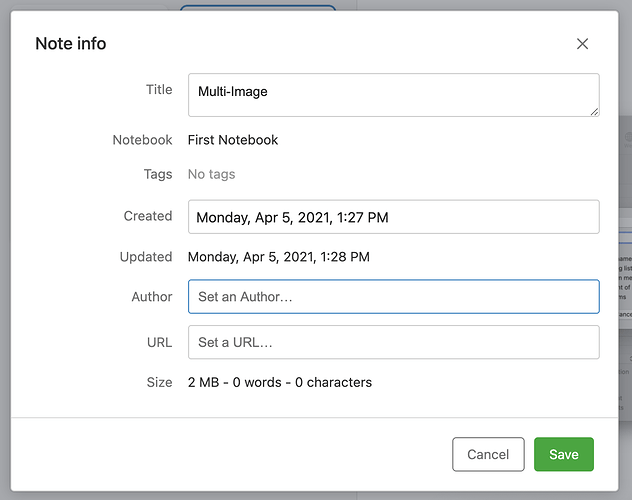 Sure, here’s one of the notes in Evernote:

Thanks! And what operating system?

Just tried ENEX, and yes, it imports the correct dates via ENEX.

Considering you’re running a beta OS - not something you should do if you want things to run normally - I’d that’s at the crux of the issue.

Just tried ENEX, and yes, it imports the correct dates via ENEX.

Seems that DEVONthink wasn’t able to retrieve the dates via AppleScript from Evernote on Ventura. Please choose Help > Report Bug while pressing the Alt modifier key and send the result to cgrunenberg - at - devon-technologies.com - thanks! Maybe there’s a hint in the logs.

In addition, does importing the notes as RTFD (see hidden preference EnableEvernoteRTFDImport) retain the dates?

I just opened DT3 to send this, but now the creation dates are correct. Not sure what changed. Interestingly, some of the times are incorrect. E.g., I have a note that was created at 8:27pm, but DT3 shows a creation time of 00:27. Maybe just Ventura weirdness.