Importing from Outlook for Mac Version 15

Probably, but I can’t test that, and you can.

With Outlook frontmost, select an email message. Click on the Scripts button in the menubar. There should be related scripts under that menu item: Add mailbox to DEVONthink.scpt and Add message(s) to DEVONthink.scpt.

For a test, select one or more Outlook messages and choose the script Add message(s) to DEVONthink script.

I selected about five of them, and it imported them to the Global Inbox. I’m guessing there is not a way at this time for DTPO to figure out which ones have already been imported if I were to select all of them?

Let’s say I have 2000 emails total, and I already imported 1000 of them, will any of the scripts know to avoid the 1000 that were imported like the File > Import > Email feature?

I can’t test with Outlook, but you can test the following:

DEVONthink Pro Office Preferences > Email has an option, Previously imported will become replicants. If that option isn’t checked, messages that have been previously imported into s database will be skipped. Checking that option prevents capturing multiple file copies of messages into the database, but does allow capture as replicant into different locations in the database. For example, I might capture a message into a project group, and also into a periodically updated mailbox group. My email client is Mail.

For a test, select one or more Outlook messages and choose the script Add message(s) to DEVONthink script.

How can I make it a shortcut like in Mail.app (⌃⌥⌘M)?

Thanks in advance for your support!

Response inaccurate. Apologies for my oversight 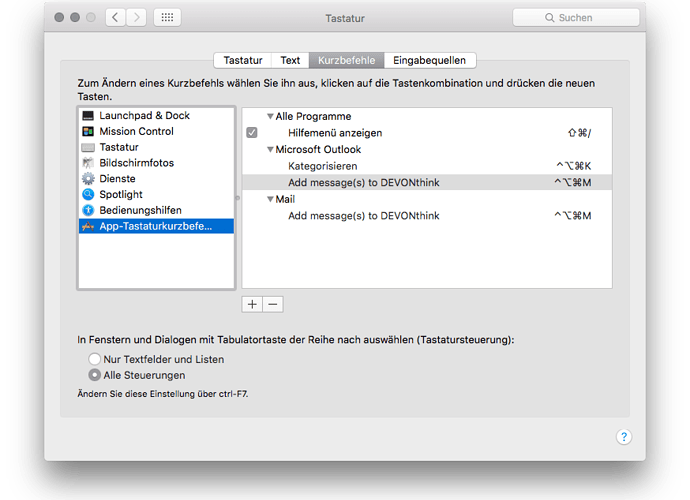 But it doesn’t work. Nothing happens, when I enter the shortcut in Outlook.

Also trying this, but to no avail.

AFAIK, it won’t trigger since the Script located in the general Apple Script menu, and as such - is not (no longer) part of the Outlook shortcuts. Should I find a simple solution, will pop it up here.

Any suggestions about the little wall I’ve run into?

As seen above, would be really useful to use a keyboard shortcut to invoke this particular script.
I’ve played around with Automator, Alfred and Keyboard Maestro, in an effort to get the script to fire.

It’s working as it should when I have a message selected, and then select the script from the Apple Script menu. Up pops the DTPO menu, asking where I want to save it.

But the moment I copy that exact same script, in an attempt to either convert it into a service, or get Alfred to invoke it, I am met with the following error:

Why would it be running as it should normally, but when I copy it into the Script Editor, and hit “Compile”, an error gets generated?

Just a quick reply to myself

I had inadvertently set same shortcut as the Messages > Add to DEVONthink Pro Office in Mail.app.
Deleting response.

Ok - I have a working Quicksilver Trigger.

Note: I don’t have Outlook, but this works as expected with Mail.app. 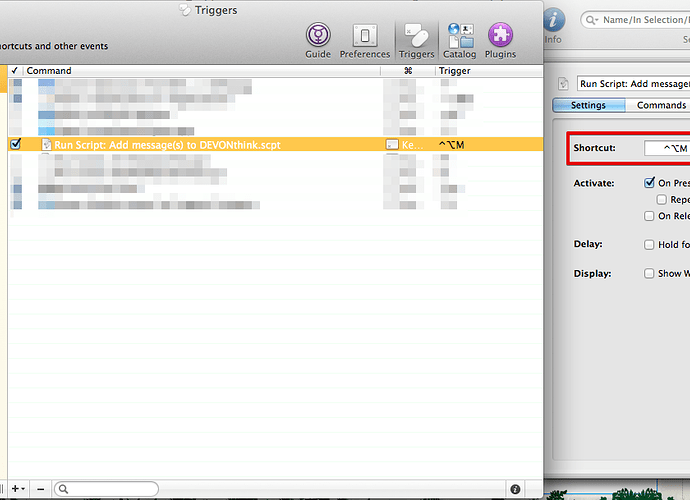 (No offense to Alfred, Launchbar, etc. I’ve been a Quicksilver User for over a decade.)