In DT3, I was fiddling with a fuzzy old PDF downloaded from Newspapers.com. I had previously tried to OCR this, but it was too fuzzy. All of a sudden I noticed a copy of the doc with a strange new file name that includes the string “ExpertClipboard” and a final suffix “tiff”. A quick internet search did not provide any info on that string. When I opened the new doc it was accompanied by a control panel that allowed me to improve the image. I haven’t tried to OCR the improved image again but it is already much easier on my eyeballs.
Apparently, some new feature automatically converted the PDF to tiff when I passed it through the clipboard. Perhaps it was the new OCR script I recently installed but haven’t tried yet.
My question is: how do I do this again? It’s a great feature. As you can see, I am a long-time but non-expert user

Actually OCR doesn’t create any TIFF files. Where exactly did this file appear? How does your script look like?

Hello CG. Thanks for coming in.
The improved doc is in the same subgroup as the original.
This community app won’t let me paste the new title in here. It must think I am trying to paste a tiff image.
I will copy the last part.
pdfExpertClipboard.pdf.tiff
I had previously separated the PDF using the app PDF Expert and brought part of the doc back to DT3 through the clipboard. I now see that it was Pdf Expert rather than ExportClipboard which was responsible for the improvement. I will have to explore this through Pdf Expert.
It still amazed me, however, that the control panel appeared when I opened the doc inside DT3. How did that happen? Does DT3 have such a control panel, or did DT3 coordinate with PDF Expert?

It still amazed me, however, that the control panel appeared when I opened the doc inside DT3. How did that happen? Does DT3 have such a control panel, or did DT3 coordinate with PDF Expert?

A screenshot would be useful.

I don’t know how to make the control panel appear again in DT3 (that’s my problem), but if I figure it out, I’ll let you know.
Here is a screen shot of the improved PDF selected at the bottom of the list, and the original pdf at the top of the list. 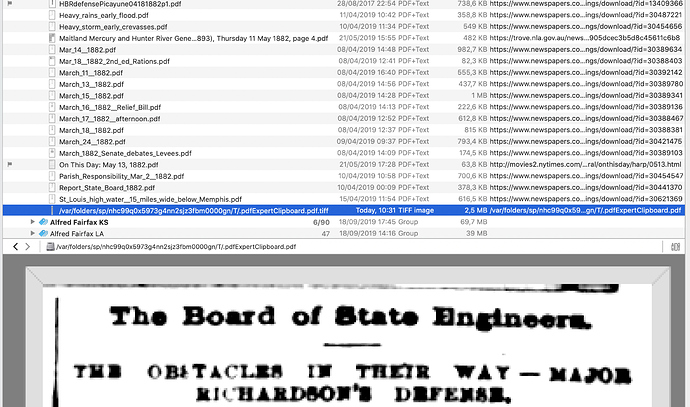 image.jpg2398×1416 759 KB
I suppose you can see that as an image.
This is not very urgent, but when I figure it out, it will certainly help toward a better understanding of Devonthink.

Did you copy an image/PDF selection in PDF Export and then use Data > New from Clipboard in DEVONthink or press Cmd-N? This could explain the weird name.

Yes, that’s what I did, but without the keyboard shortcut. I have just been exploring PDF Expert, but I haven’t figured out how to improve PDF images in that app. I’ll have to ask them.

I think I’m beginning to understand. Neither PDF Expert nor Preview can edit pdf images. But I found this in EasyDraw help by chance: quote
When you execute a Copy from one application (e.g. EazyDraw) and a Paste to a second application (e.g. PowerPoint) the operating system (OS X) facilitates the transfer of information (your EazyDraw graphics) using the system pasteboard.

Data can be placed in the pasteboard server in more than one representation. For example, your EazyDraw graphic might be provided both in Tag Image File Format (TIFF) and as encapsulated PostScript code (EPS). Multiple representations give pasting applications the option of choosing which data type to use. unquote

So the clipboard is doing it. But once the clipboard contents are replaced, the control panel will no longer appear. I need to find some way to manage the clipboard or a simple image app to run this through. I may have to learn to write scripts. Life is too short.

I’m guessing the “control panel” you are referring to is the Edit panel that appears when an image is double-clicked in DEVONthink. 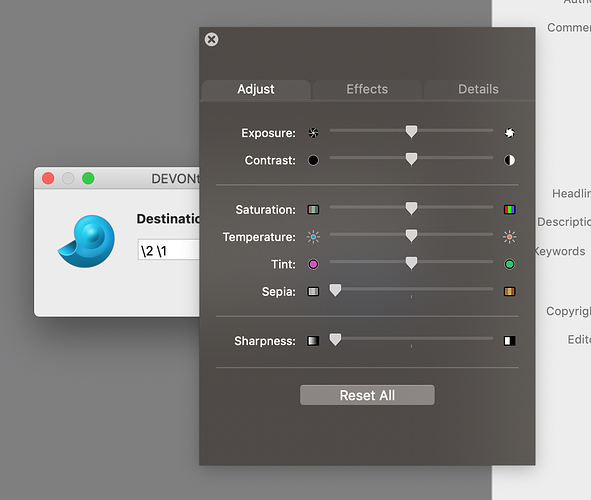 Thanks, Blue, that’s the one, but it doesn’t open when I double click on my pdf text images. I suppose that’s because DT considers it to be text. I can send it over to good old Graphic Converter for a health cure and bring it back. That seems like a lot of trouble, so I’ll save it for difficult situations.
I still wonder how that pdf temporarily got a tiff suffix when I brought it back through the clipboard. DT AI must be smarter than we thought.
Thanks again

Yes, it is for images, not PDFs.
It’s also mentioned in the built-in Help > Documentation > Documents > Images, Audio, and Video.

The easiest wayI to improve readability of fuzzy old PDF scans was obvious, and I finally found it:

Maybe someone will write a script for this. Thanks to CGrunenberg and BlueFrog for their help.