DTTG 3 is using different menu styles. Is this deliberate or just unfinished business?

Also: When using the multi selection feature the context menu says “Move All to Trash”. It should just say “Move to Trash” for you could select just one file. [The wording made me a little anxious when working through duplicates: Will DTTG delete all duplicates matching the selected file or just the one?] 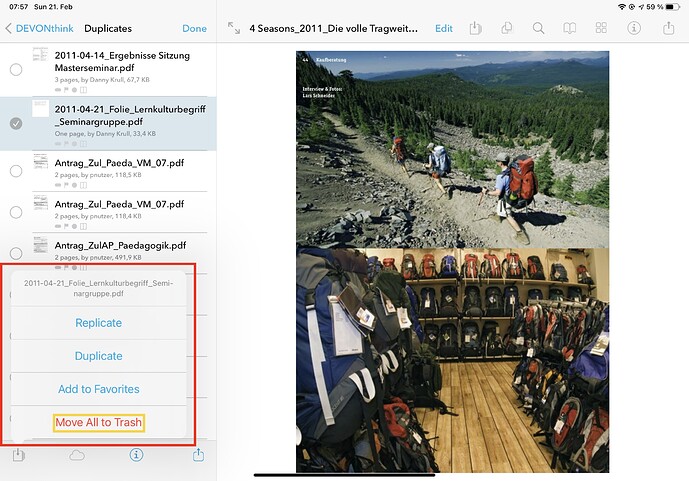 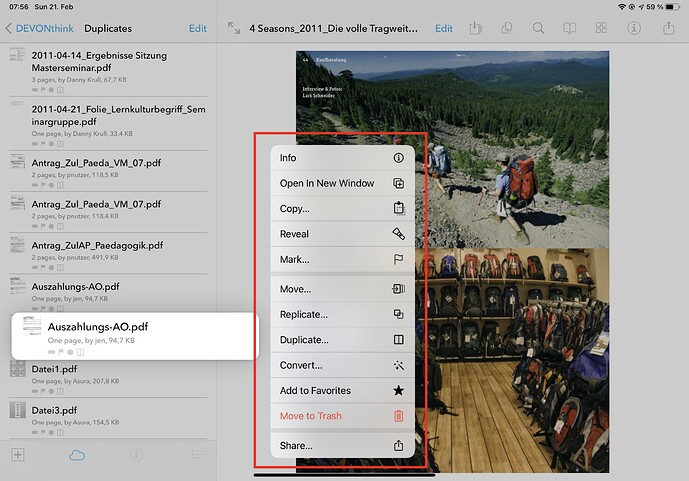 The the menu popping up from the toolbar button is a so called alert sheet; the long-press menu is a context menu. They follow different design rules by iOS. We might replace he alert sheet with a context menu when we move fully to iOS 14 and cut iOS 13 compatibility.

The action sheet says “Move All to Trash” as you could have more than one item selected.

The action sheet says “Move All to Trash” as you could have more than one item selected.

I am aware of that. But this does not cover selections that consist of just one file and the simpler phrase would not lie, either. Just saying …

I noticed the Files app has switched to a context-menu-style menu. Or is it just a context menu pinned to the view switch? That’s what ultimately prompted my post. 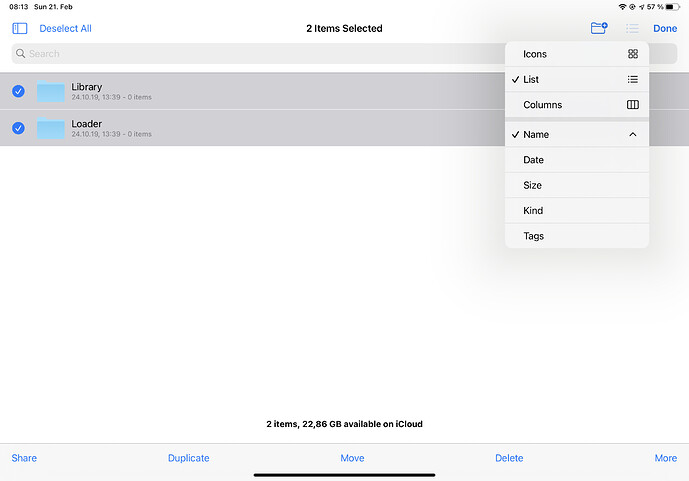 I noticed the Files app has switched to a context-menu-style menu.

Yes. We’ll move to it when we go iOS 14 or later only. We want to have as less code duplication as possible.

You should move now. Sooo many good APIs in iOS 14.

), PHPicker, tagHypotheses function that lets you find multiple possible tags for a given word or substring in the text,

Natural Language Processing got a massive boost in iOS 14… next generation DevonAI that runs on mobile and macOS? The on device processing is incredibly fast.

I am aware of that. But this does not cover selections that consist of just one file and the simpler phrase would not lie, either.

The wording was, actually, only odd when using the Organize menu for a single item in a smart group. Fixed for 3.0.4.

You should move now. Sooo many good APIs in iOS 14.

And leave all customers behind who haven’t upgraded to 14 yet? I think there’s already enough traffic in the forum with ghosted files etc.

Natural Language Processing got a massive boost in iOS 14

Not to curb your enthusiasm, but the last time I saw somebody try to talk Alexa into playing a certain piece of music (and Alexa uses cloud “intelligence”!) convinced me that “natural language processing” might still be some moments away. Just imagine someone using an english term in an otherwise german sentence (or, as was the case mentioned above, trying to play a german song talking to Alexa in spanish).
BTW: Do these new APIs work with all (or at least a large enough number of) languages, or only with English? And how long will they be around and support (just think of JXA, introduced with much fanfare and agonizing. Or the deprecated web archive…). So maybe it’s wise to not immediately switch an app completely over to any new API coming out of Apple’s labs.

There have been several zero days patched since iOS 13. Anyone still on 13 are jailbroken or are looking at having their phones compromised with a crafted text message or the lovely WebKit chain zero day bugs discovered recently. (Browse the internet and get compromised)

A few new features are just Core ML expansions. I can’t see them going away anytime soon when Apple just added the Mac into their AI fold with the M1 chip.

I’m not saying that people should not upgrade to iOS 14. I’m just saying that there are probably a not so important number of them who have not done it. Although they should. Like should keep a distance and wear a mask as opposed to doing it.

Several years ago I would have agreed with you. Now everything is more like a rolling release these days. Forcing iOS 14 would cover 81% of iOS users according to Apple.

Forcing iOS 14 would cover 81% of iOS users according to Apple.

Our customer base is a bit on the conservative side. Leaving behind 19% is too much but when summer comes, iOS 15 comes. And then we’ll cut the ties to iOS 13.