24 hours into using DEVONthink Pro and learning a lot! Nearly all of my work involves email and i have read old community messages stating that email message attachments are not indexed by default; is this still the case with DT3?

If it is how can i index the many hundred of attachments i want to import, with their messages, from Archived email either via Mail or Outlook?

Yes, DEVONthink 3 indexes the content of email attachments when possible, provided the attachments are indexable.

If you had an older existing database, you’d need to do a File > Rebuild Database on it to index existing emails.

Get more confused as the DT documentation states;

Imported email messages have their
contents indexed (excluding the contents of
attachments). This makes them searchable
and a valuable asset, whether you’re archiving
email for personal or professional reasons.

Thanks. I will have to fix that for the documentation.
And note the indexing applies to the Pro and Server editions.

If you had an older existing database, you’d need to do a File > Rebuild Database on it to index existing emails.

Is there a way to check if one uses an “older” database?

Thanks, but is there a way to verify whether the current database is in the old format?

I’ve been a long time user of DT, started building my databases in DT2 in yesteryear and simply imported them in DT3.

There’s no essential change in format between DEVONthink 2 and 3.

I would say, if you’re using a DEVONthink 2.x database with imported emails and you want to make sure the attachments are indexed, I would make sure you’re backups are current (just in general as well), then do a File > Rebuild Database on it.

May I ask how one simply searches / filters archived eMails that have an attachment?

You just search as you normally do, like so… 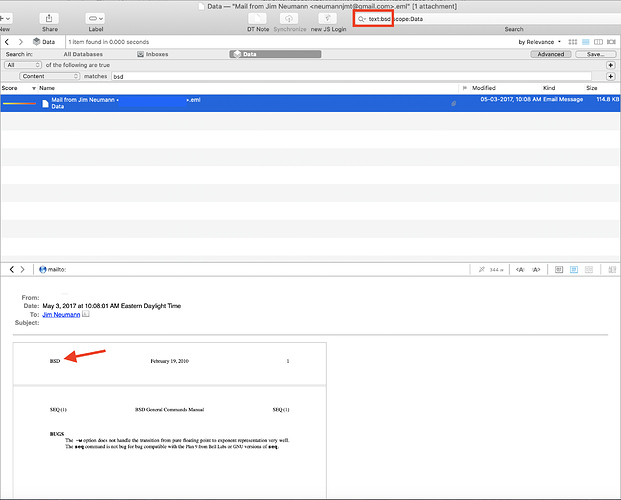 You could add Kind is Email too - and note this is targeting the email not the attachment. The attachment would have to be separated from the email to refer to its specific type.

Lastly, you can create a smart group for emails having attachments, like so…

I found out that “Attachments is greater than 0” works as well … and makes more sense to me.

And: Let me ask: Why isn’t it possible to anymore to invoke a Search-Window that looks like the Smart-Group-Search-Window … like it used to be in Devonthink 2.x?

Why isn’t it possible to anymore to invoke a Search-Window that looks like the Smart-Group-Search-Window … like it used to be in Devonthink 2.x?

People have long been asking for a single integrated window interface to remove all the windows found in DEVONthink 2.x. Now they have it.

I am afraid, I do not understand your answer. Even if some “people” may have asked for integrated window-interface, does not necessarily mean that others wouldn’t like to carry on the way they have been doing it.

All I am asking for, though, is just an option to invoke – via shortcut – a search-window of the welcomed complexity the Window for creating Smart Groups offers instantly and initially.

At least for me – as someone from the party of the “other people” – the former way of an advanced search field that yields – if needed – into the creating of a Smart Group feels way more natural to me than the new concept does.

We do not simply create things because people ask for it; we do it because we are convinced that we are able to offer something significantly better than the former iteration. Otherwise we shy away and keep it in the incubator for a further good little while … Maybe Someday later … you know.