Hello to the experts. I’ve found the following description from MathJax:
Mathematics that is written in TeX or LaTeX format is indicated using math delimiters that surround the mathematics, telling MathJax what part of your page represents mathematics and what is normal text. There are two types of equations: ones that occur within a paragraph (in-line mathematics), and larger equations that appear separated from the rest of the text on lines by themselves (displayed mathematics).
Now I did as described and found that the inline mathematics was not really inline since the letters size were as big as in the larger separated equation.
When opening the file in obsidian, there is a better rendering as the inline maths have smaller letters which fits the lines.
Is there something to do in the preferences? Or is this the standard solution? Is there somebody who can give me an advice?
btw. for the inline equation the delimiter is $ expression $ the other delimiter \ ( expression \) will not work at all.

Is there something to do in the preferences?

Did you enable MathJAX in Preferences > Files > Markdown?

Of course, otherwise it will not show the rendered result.
To my surprise, in the DTTG on iPad it looks as expected with the inline equation. It’s a strange behaviour.
With Obsidian the result is as expected on both devices.

Could you please post an example document plus a screenshot of Preferences > Files > Markdown? Thanks! 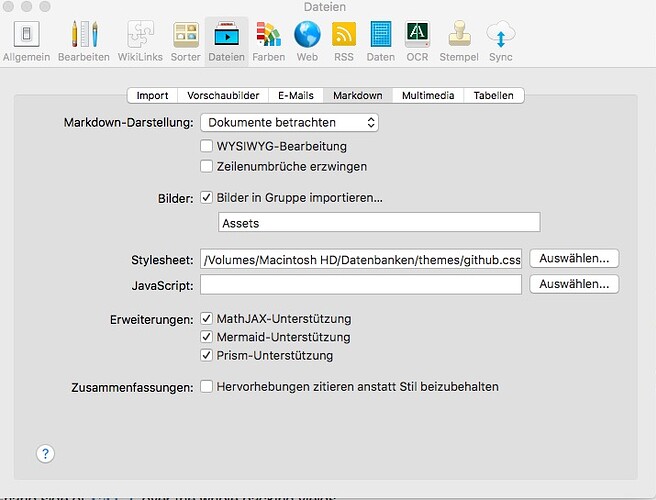 The raw Markdown source would be great, thanks.

Here it is (the same as before in raw Text)

When I look at the HTML generated by DT (by “Convert to HTML”), I can see that there’s nothing special happening: The inline expressions are simply <span class="math"> elements. However, when I open that document (i.e. the HTML) in a browser, these span elements are augmented (for lack of a better expression) by a lot of stuff, some of it being inline styles (yuck). These are most probably inserted by the MathJax script, and one of first always sets the font-size attribute to 116%.

I’m not knowledgable enough to say if there’s something that can be done about that. But given the expressions you’re using, I’d go out on a limb … increasing the font size for (e.g.) the T with the subscripts seems to be a reasonable decision, since the subscripts should be legible, too. And they’re by definition smaller than the subscripted symbols. Also, the font-size is the same for inline and displayed symbols.

These are most probably inserted by the MathJax script, and one of first always sets the font-size attribute to 116%.

That’s right, most add-ons like MathJax or Prism change the rendering on the fly.

The difference being that Prism uses classes whereas MathJax uses inline styles. Which makes Prism’s behaviour easy(er) to modify, whereas the MathJax approach prevents any modifications by the user.